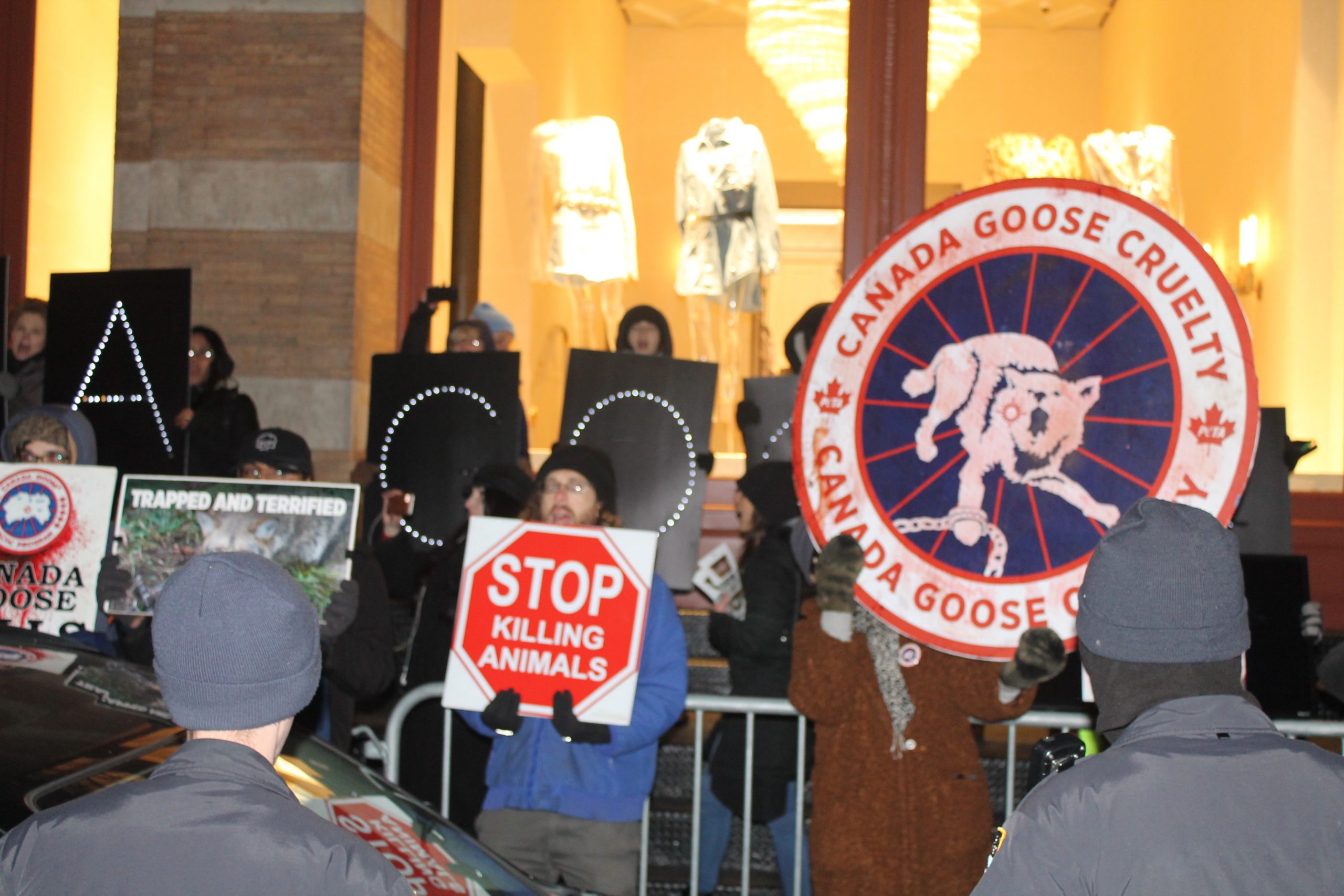 Committed vegan activists protested across the street from the Soho Canada Goose store on Saturday. (Photo by The Village Sun)

BY LINCOLN ANDERSON | Updated, March 9, 1:45 a.m.: Vegan protesters had planned a silent vigil outside the Canada Goose store in Soho last Saturday evening but were goaded into a full-on street shouting fight by a raucous group of “consumer choice” activists.

Ever since the Canada Goose flagship store opened three years ago at Wooster St. between Spring and Prince Sts., vegan activists have hammered the place with regular protests during the cold weather.

They’ve been at it again, picketing the Soho shop the past few weeks. This one, though, was supposed to be the first silent protest.

They are demanding that the pricey Canadian parka purveyor stop using coyote fur to trim the garments’ hoods and goose down for their insulation.

Canada Goose, for its part, in its “fur and down policy,” claims that all the animal products used in its garments are ethically sourced. The clothing company says its down is a byproduct of the poultry industry, not “live plucked,” and that it uses “real wild fur,” not from coyote farms.

It was a fittingly Arctic-cold Saturday, around 6 p.m., as the vegan activists came marching silently, as billed, down Wooster St. to the store. Some of them toted large, white LED letters spelling out, “CANADA GOOSE KILLS.” Others carried posters of terrified-looking coyotes caught in traps or piles of the dead doglike animals. Still others carried video screens showing gruesome scenes of bloody animal carnage.

They mustered across the street from the store for their silent protest, though their leader, Leonardo Anguiano, first addressed them.

“My brothers and sisters, we are here for them,” he solemnly intoned, referring to the animals whose fur and feathers Canada Goose uses for its garments.

But on the other side of the street in front of the costly coat shop, the other group was gathered in a protest pen. They were far from quiet, yelling their heads off, with slogans like, “PETA kills pets!” “PETA kills dogs!” “PETA are perverts!” and “Not your choice!”

It wasn’t long before the vegans broke their “vow of silence” and started hurling shouted slogans back: “Fur-free NYC!” “Canada Goose has fur on their hands!” and “Not your fur!”

Police were scattered along the street between the two groups, though there was no violence.

One of the leaders of the loud group identified himself as Will Coggin, managing director of the group Center for Consumer Freedom, based in Washington, D.C.

He readily admitted they were there to counterprotest.

“They believe people should not be able to wear leather, fur, wool, down feathers, silk,” he said of the vegans. “They’re trying to impose that on others.”

The vegan activists are indeed calling for New York City to “ban fur.” However, a bill introduced in the City Council last year to prohibit the sale of new fur products went nowhere, reportedly due to pushback from black and Jewish groups. Another anti-fur bill has been introduced in the state Legislature by Upper West Side Assemblymember Linda Rosenthal that would ban the manufacture and sale of animal pelts in New York.

For their part, the vegans claim the consumer-choice group is funded by the fur industry. But Coggin and others in his group denied it.

“We’re nonprofit,” Coggin said. “We get some funding from the restaurant / food industry. They’d ban meat….all dairy products and eggs,” he charged of the vegans.

Meanwhile, the vegans said the consumer-choice protesters have been showing up at rallies by Caring Activists Against Fur, including recently in New York City outside Bergdorf Goodman and also at a D.C. event.

Coggin and his allies, again, denied it. One of them, wearing a mask, said he was a college student.

“I’m doing this for my résumé,” he said, as he brandished an anti-PETA placard in each arm. He said the mask was not for coronavirus but because of some recent facial surgery.

Another of them, Charles Peralo, said he was also a member of Young Amercians for Liberty, a Texas-based anti-socialist group.

As for their anti-PETA chants and signs, Coggin charged People for the Ethical Treatment of Animals has a high kill rate at its animal shelter at its Virginia headquarters.

“None of us are with PETA,” Anguiano said.

Indeed, a number of the vegans’ signs sported the PETA logo.

Anguiano turned the “free choice” argument back on the vegans’ opponents, asking how the coyotes feel, for example, about being killed so their fur can be used for hood fringe.

“If we’re getting down to free choice, free choice is about not harming any victims,” he asserted.

A woman who organized the rally along with him added of the coyotes that Canada Goose uses, “This is dog fur — 90 percent the same DNA.”

“Everything is placed for a reason,” she said of the role coyotes play in the food chain, such as keeping rats’ numbers down, for example.

But Canada Goose counters that “abundant coyote populations [in Canada and the U.S.]…are known to endanger pets and livestock,” which justifies culling their numbers.

Anguiano conceded that the vegans’ foes had thrown a monkey wrench into their plan for a solemn rally.

“Today was supposed to be silent for the victims…mourning,” he said.

Two years ago, the vegan protesters earned residential neighbors’ ire due to their ear-splitting demonstrations outside the store. But Anguiano said they have toned things down a lot since then.

“Our relationship with the neighborhood is better,” he said. “We’re not using whistles, pounding on drums for three hours like before or using amplified sound.”

The community blowback got in the way of the vegans getting their message out, he admitted, adding that the goal is to educate people about the issue.

He noted that one woman recently did complain that their rallies were upsetting her dog, and he had promised her that they would be doing a silent protest. If the pooch had heard the two groups shouting back and forth at each other on Saturday, though, it probably wouldn’t have liked it too much.

At any rate, after about 40 minutes, the vegans marched off back up Wooster St., at which the consumer-choice group cheered.

“Go back to North Korea, you commies!” one of them shouted. “Fashion fascists!”

Another young man offered his own logic for protesting against the vegans, specifically, their food choices: He said an increase in U.S. consumption of avocados and quinoa would cause a shortage of these foods in Mexico and other Latin American countries that supply them.

Inside the Canada Goose store, commerce went on uninterrupted. The manager said he couldn’t answer any questions and referred any questions to corporate communications.

Meanwhile, Tracy Reiman, the PETA executive vice president, told The Village Sun that the Center for Consumer Freedom is putting out falsehoods about both itself and PETA.

“The CCF is a front group for animal-abusing industries,” she said, “and PETA invites the public to watch this video to see for themselves how PETA helps animals in our local community.”

Reiman also shared an article by the Intercept about California anti-fur protesters being paid by the fur industry.

As for CCF’s charge that the vegan activists are connected to PETA, Reiman said, “We don’t check the identity of protesters who attend every demonstration, so we have no idea. But we are glad they’re protesting Canada Goose cruelty.”