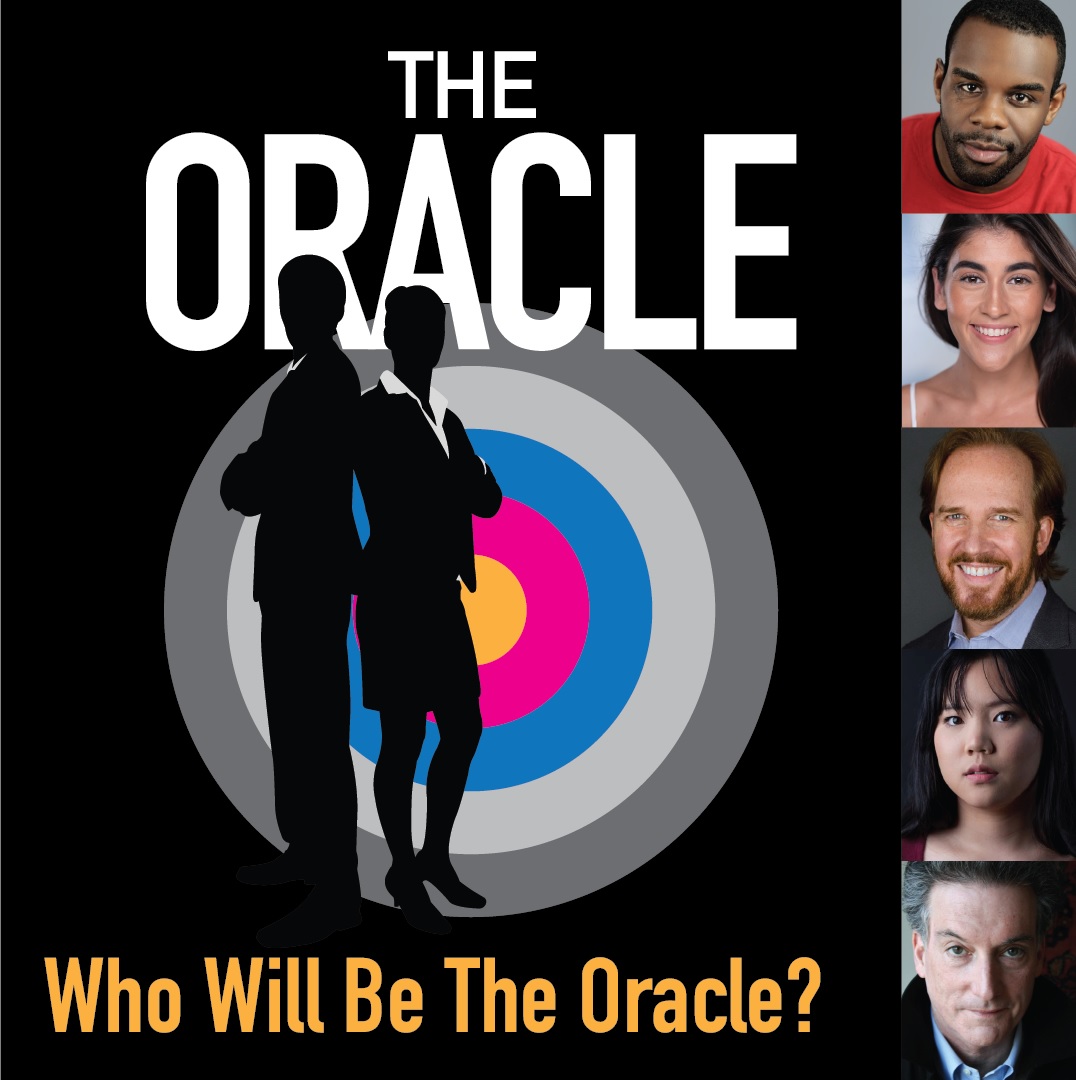 "The Oracle," a new play by T.J. Elliott and Joe Queenan about business rivalry, will have a one-week run at Theater for the New City this month.

Funny business: How a Wall Street Journal humorist and an ex-exec are shaking up the stage

BY CLAUDE SOLNIK | On a recent day, Joe Queenan, a humor columnist for The Wall Street Journal, described the situation and the set-up for “The Oracle,” the new play he wrote with T.J. Elliott. Although it’s set in an office, Queenan sees the situation as similar to the 1950 Western “The Gunfighter,” starring Gregory Peck as an aging Johnny Ringo.

Queenan and Elliott have written a fast-paced, fun new comedy that, although it’s not strictly speaking a Western set in the workplace, is about a company where two chief knowledge officers vie for power. “The Oracle,” playing at Theater for the New City in the East Village from May 18 to May 22, is the latest result of the two writers’ collaboration, frequently finding comedy (and some drama) in the office.

“The story is about how, in business, one succeeds not by doing what the textbook will tell you,” Elliott explained. He’s a former executive at a large company and author of business books, as well as numerous plays.

In a world where business is rarely viewed as fodder for laughter, Queenan in the pages (and digital views) of The Wall Street Journal and now with Elliott on stage finds humor and heart. Rather than wielding weapons, the characters wield wit as they struggle for power and position. But if working may involve drama, even talking with these two writers tends to lead to laughter.

“T.J. writes long e-mails. If you send me an e-mail, my reply is about six words long. I don’t get paid a dollar a word for an e-mail. I won’t write anything long unless I get paid for it,” said Queenan, who punches up the dialogue in “The Oracle” with humor. “One thing I like about writing plays is, when you write jokes, you don’t have to write long.”

David Mamet became famous writing about male bravado. Neil Simon wrote about the humor in relationships. Queenan and Elliott often write about the workplace. While television’s “The Office” mines work for laughter, Elliott says that may be a paradigm for successful comedy, but not necessarily a successful company.

“The thing about “The Office” is, if I were an executive, I would close down Dunder Mifflin,” Elliott said. “I would have closed it down a long time ago. I would be the person they would have sent to tell them they were made redundant.”

Ask Queenan where the humor is in business writing and he wisely says it’s in the words of the person writing about it. He wrote humor for Barron’s, Forbes, The New York Times and other publications before taking on a twice-monthly column for The Wall Street Journal.

His writing over the years included a deep rumination for Chief Executive magazine about how to tell whether members of the board of directors are still alive. In print, and now in theater, he says he and Elliott, even if their story owes a little bit to Westerns, are staking out new territory.

Elliott stepped in during an interview where the two literally complemented (and now and then complimented) each other.

“There are knowledge officers everywhere,” Elliott said, noting these executives are paid to know what to do, as if other executives do not.

In a freewheeling conversation about business, office politics (the same as non-office, except there are no political parties to tame it) and theater, the two made a lot of points and got a lot of laughs from the interviewer. Elliott said “The Oracle” is about a successful company where the C.E.O. basically makes two chief knowledge officers compete for control.

“This is a sophisticated play, a sophisticated idea to write about chief knowledge officers dueling it out inside the corporation,” Queenan said. “Then you have the C.E.O., who is anything but an intellectual. He’s sort of a stand-in for the public.”

Queenan, in a way, is an accidental playwright, or co-playwright, since he collaborates with Elliott. Being a co-playwright is a little bit like being co-dependent: It’s not clear you want a cure, or that one exists. He began playing basketball with Elliott, which led to conversations, requiring less effort than on-court performance.

When Elliott retired, Queenan urged him to return to writing plays. Elliott urged Queenan to collaborate and a playwrighting partnership was born. Four play collaborations later, “The Oracle” is making its New York City debut.

“You know a question I always wondered about at the theater was who Shakespeare thought the hero was in “Julius Caesar.” When you read “Julius Caesar” as a kid, for a lot of people, Brutus is the hero. He’s trying to save the Roman republic,” Queenan said. “But for a lot of other people, Brutus is not the hero, because he stabs his friend in the back. So who is the hero in our play?”

Of course, as always, Queenan has a point. Ask who the hero is in “The Oracle” and that, too, depends on point of view, although there is some metaphorical backstabbing. Few places are as dangerous as a desk, unless it’s the water cooler — even before COVID-19 hit. A better question than the identity of the hero, in business and life, may be who ends up happy.

“There are five characters in this play. At the end of the play, there’s only one character how can be said to be happy,” Elliott noted. “That’s the character who’s getting thrown out of the business for the second time.”

The two writers’ collaboration makes the play (and its dialogue) work, providing plot, character and comedy. Even their conversation is funny, as comments bounce back and forth like a seesaw constantly going up and down, threatening to throw you off just when you start feeling comfortable.

Elliott talked about the time they were doing a Zoom version of their play “Grudges” about brothers on opposite sides of the political spectrum. Queenan told one of the actors that the character he was portraying was incredibly “annoying.” Criticizing an actor’s character is akin to telling a mother that her baby is ugly: It’s something that’s just not done.

“I’m going to write jokes for this guy, but I don’t like this guy,” Queenan said of a character in “The Oracle.” “I think that’s part of what makes the play funny, the ambiguity.”

Elliott said life plus time can give the perspective to find humor in situations that are anything but comic while they’re happening to you.

“There’s a sense of: This would be really funny if I were watching it,” he said of various situations. “Unfortunately, I’m living it.”

If you reach the age of 50 without being nostalgic about something, you’ve probably done something wrong. Queenan is nostalgic for a time when journalism was about “being there” rather than spending all day looking at a screen or checking your Twitter feed.

“Journalism was originally, you go down to bars and talk to people. You go out into the street,” Queenan said. “As a humorist, I’ve always found the greatest resource, if you want to do a funny piece, is the public.”

For a short time, he wrote a column for The New York Times’s Style section called “Good Fences,” which was about suburban life. But he quickly ran out of ideas because there are only around six stories to write about suburban life, he said. Maybe seven.

“One of the stories that I wrote was why Tarrytown didn’t have any famous people in it,” Queenan said. “Chappaqua had Hillary and Bill. Bedford Hills had Mariah Carey. I went to Chappaqua and interviewed a realtor. I asked her if the reason Chappaqua had so many famous people was because there was a lot of parking at the train station. And she looked at me like I was an idiot and pointed out that among many other attractions Chappaqua had very good schools. She wrote my article for me.”

Queenan goes to work in a second-story private office (yes, there’s parking nearby) in Tarrytown, closing the door when the working day is done and reserving that time for family and life beyond the walls of work. His days are short, he said. Really short. He writes about business and, to an extent, the office, as a humorist, not a journalist — but as he sees it, he tries to do so from as safe and sane distance as possible, and he is not referring to a pandemic. He has not had a 9-to-5 job in 33 years and views this as his greatest accomplishment, both as a writer and as a human being.