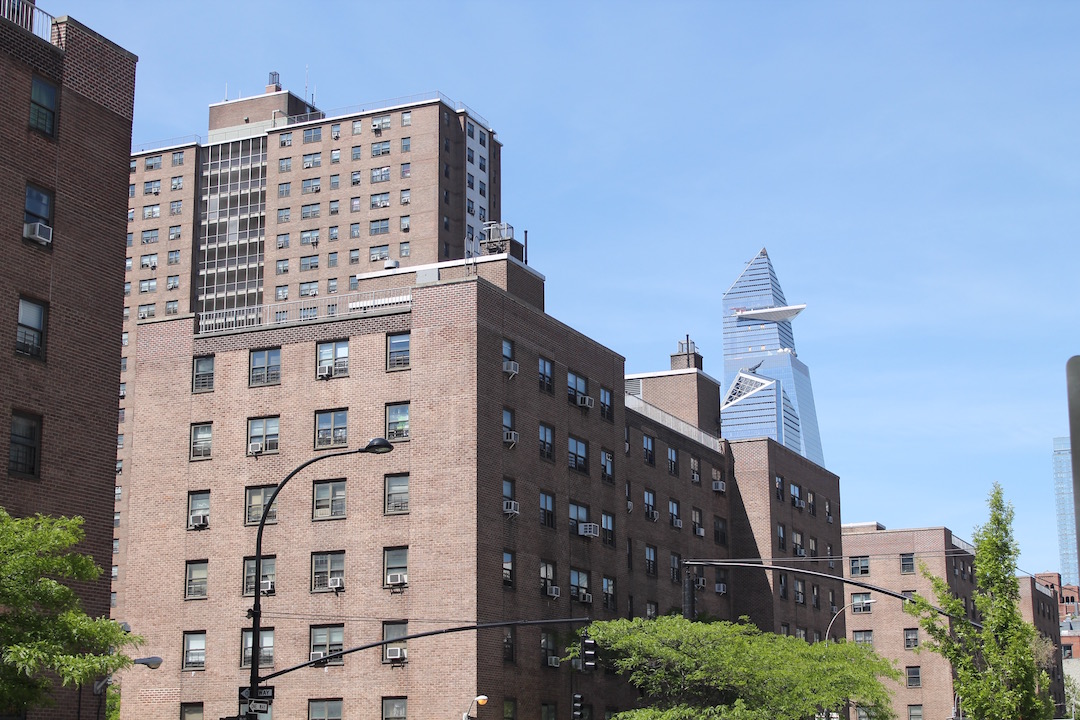 The Robert Fulton Houses in Chelsea, with 30 Hudson Yards and its The Edge viewing platform rising in the background. (Photo by The Village Sun)

BY LINCOLN ANDERSON | Some residents at the Robert Fulton Houses wish the city would just drop its plans to overhaul the funding and management structure of the development.

Meanwhile, everyone is waiting for a working group’s report to drop.

That report, said to be coming out this week, will lay out the city’s latest plans for Fulton Houses and the nearby Elliott-Chelsea Houses. The Mayor’s Chelsea NYCHA Working Group that drafted the report included a mix of local politicians and residents from the Chelsea Housing Authority complexes.

Miguel Acevedo, president of the Robert Fulton Houses Tenants Association for the past 12 years, is a firm believer in the new so-called PACT (Permanent Affordability Commitment Together) plan.

Under PACT, 62,000 — or a little more than one-third — of the apartments in the New York City Housing Authority would be run by a “development partner” that would hold the ground lease for them in a “public-private partnership.”

“NYCHA will enter into a long-term ground lease with a development partner that will repair and manage the development,” according to the agency.

In addition, the developments would be moved from the Section 9 program to Section 8. The latter is typically used for private housing.

As Acevedo, sees it, it’s the only option for NYCHA, which is burdened with staggering debt.

“Forty billion dollars,” he said. “Where are we gonna get $40 billion?

“The PDF [of the report] is going public,” he said. “There’s going to be no demolition, no eviction of tenants. The most important thing — it’s going to show the protection [from eviction] for the tenants. There will be incredible protection.”

Technically, the new plan is being called PACT/RAD, with RAD referring to the federal Rental Assistance Demonstration program.

“The person who put RAD into place was Barack Obama,” Acevedo said. “If you supported Barack Obama, you got to support his agenda, his ideas. This comes from one of the most respected presidents we had in office.

“RAD is a partnership — not a private takeover,” he stressed. “NYCHA still owns the land. I always use the analogy: You’re in a bad marriage — you get a divorce and get someone new.”

Under the plan, money brought in by leveraging public and private debt and equity would be reinvested into the public-housing stock. The funds would be used to renovate apartments, lobbies and elevators, repair roofs, improve security and, in general, create better living conditions, as Acevedo tells it.

Most residents living on fixed incomes would not have to move, he noted.

The previous version of RAD for the Chelsea NYCHA developments called for demolition of two low-rise buildings at Fulton, which would have been replaced by two new mixed-income towers, including market-rate units. But demolition was pulled from the plan about a year ago.

What the scheme does include now is a roughly 18-story, 130-unit “infill” building that would be constructed in a current park on W. 17th St. between Ninth and 10th Aves. in the Fulton Houses. The new building’s apartments would be split 50/50 between market-rate and affordable.

“And that building doesn’t get built until the apartments are renovated,” he maintained. “All the renovations are done on all four developments — in Fulton and Elliott — before a brick is put down for that new building.”

He said the new building would not be any taller than the high-rise buildings at Fulton, which has a mix of high- and low-rise buildings.

Opponents, though, counter that there are other potential funding sources, including a pending bill by Congressmember Nydia Velazquez that would inject $70 billion into NYCHA and the Green New Deal, championed by Congressmember Alexandra Ocasio-Cortez.

But Acevedo said both of those options don’t seem like they will happen anytime soon. They both face a roadblock in Congress from “Midwesterners who don’t believe in public housing and [from] Republicans,” he noted. “So we gotta find alternatives.”

For her part, Jacqueline “Jackie” Lara, the secretary of the Fulton Houses T.A., has been a leading critic of RAD and now PACT/RAD.

“It’s, like, all fake. It’s cheap material,” she charged of NYCHA renovations done under RAD elsewhere around the city.

Of greater concern, she said, “They’ll look for excuses to get black and brown people out.”

“They’re stealing our development,” she accused of Acevedo and local politicians.

Furthermore, Lara said, she believes demolition is, in fact, still on the table. She said she had “just heard” recently that this was the case. Her building was one of the two that would have been razed under the original RAD plan for Chelsea public housing.

She objects that the city pushed ahead with the conversion during COVID, noting, “People are scared to come out during the pandemic.”

Lara has lived in Fulton Houses for 18 years. She and her children were in a homeless shelter before they moved in.

“Me and my kids suffered a lot,” she said. “We slept in trains… . I love my home. We want to keep public housing public.”

Activist Marni Halasa, who is running for City Council in District 3, has been standing firmly with the PACT/RAD opponents.

“We have to stop RAD because it’s an eviction machine,” she warned. “Nydia’s bill is the answer.”

But, in Acevedo’s view, Halasa simply is not getting it.