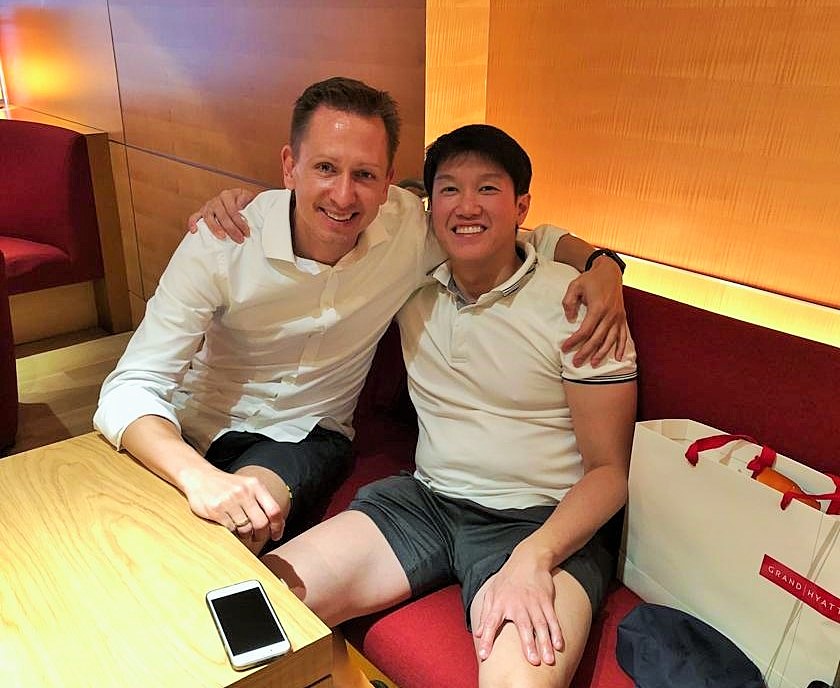 BY LINCOLN ANDERSON | The Chelsea man fatally struck by a hit-and-run, rogue cyclist last month was an immigrant from Singapore who had an abiding love affair with New York City.

The cyclist got back on his bike and rode off, leaving the scene of the accident. Police are seeking the public’s help in arresting him.

Lee was taken to Bellevue Hospital, where he died from his injuries five days later.

Sebastian Feldmann, Lee’s best friend, who posted a reader comment on The Village Sun’s original Aug. 23 online article on the tragic incident, filled in the details about his beloved pal. He also decried New York City’s bicycling scene as a “Wild West” compared to Germany, where he lives near Munich.

“Gavin was inspiring, highly intelligent, giving, one of the most friendly persons I know, treating everyone equal and equally well,” he said. “He felt like an American, loved New York City, and for more than 20 years he didn’t even have a minor incident in New York City.”

He said Lee was born in Singapore and attended private school in the U.K. with none other than Prince Harry.

After that, Lee went to Canada for his further studies.

‘But his greatest ambition was always to live in New York — this city was his ‘love of [his] life,'” he said.

After graduation, Lee spent time in both Toronto and New York City, before finally settling in the Big Apple and receiving his U.S. citizenship. He worked in finance.

“Gavin was very successfully running his own business in the financial sector,” his friend said. “He was brilliant and fast with numbers.”

The two men quickly became best friends after meeting while living together in a student dorm in Toronto in 1999.

Over the years, their friendship developed and grew as Feldmann and his wife and kids visited Lee in New York City and Lee visited them in Germany.

When Feldmann proposed to his wife on Christmas Eve in 2002 — in the middle of the ice skating ring at Rockefeller Center — Lee was there as his buddy’s best man. Lee tried to snap a photo to capture the moment, but it wasn’t easy amid all the swirling ice skaters, Feldmann recalled.

“Actually, people say there was TV footage of that on national TV, but I never found it,” Feldmann noted of his on-ice proposal.

Lee would later become the godfather of the couple’s two children.

In recent years, the COVID pandemic kept the men from reuniting in person. However, Feldmann and his family finally were able to come to New York last month — and had planned to see Lee. Tragically, just days before they arrived, Lee succumbed to his injuries from being hit by the cyclist.

“We planned for three years that we would reunite for ‘reliving’ the past decades and memories in New York together with my kids, who are now 13 and 16,” Feldmann said. “COVID came, so we had to go from 2020 to 2021.. and finally this year it was possible! We flew over on the 15th, arrived in New York on the 21st…and didn’t reach him on the phone or via e-mail.

“That was so not Gavin,” he said of the silence. “He was one of the most caring, loyal, respectful, loving and best-mannered persons I ever got to know. So I tried his phone over and over again…until finally on Tuesday morning, his uncle answered…and told me Gavin was dead.

“Imagine our shock and devastation. All we had planned for this week and the future collapsed — because of a stupid bike accident that was so avoidable and unnecessary!”

Feldmann, who was in the city until Aug. 28, said Gotham’s biking landscape looked pretty chaotic to him.

“Compared to Germany, it is the Wild West over here,” he observed. “It’s honestly shocking that no one seems to care about traffic rules. It’s just like thinking of ‘friendly recommendations’ rather than law!”

In his country, cyclists don’t need a license — but if they commit serious-enough offenses while biking, they can get points on their driver’s license.

“In Germany, people much more respect the law since they know any issue on the bike, scooter or the like will also affect their driver’s license,” he explained.

“In Germany, we don’t have license plates for bikes, but for faster e-bikes and scooters — above 25 km/h, I believe. But when you’re drunk on a bike, or things like that, the police will pursue it as if you drove a car. So they can even take away your license.”

However, he added, “In Germany with a rising number of delivery bikes, e-bikes, e-scooters, etc., things are getting worse every day. So [there are] many more accidents — but not with people running others over, because everyone still respects the traffic rules, but rather them crashing by themselves or [collisions] between cars and bikes on the ever-rising number of bike lanes.”

Feldmann added that, in Germany, scooters have speed limits and their riders must wear helmets.

Following the news of Lee’s death, Feldmann looked at the streets of his friend’s beloved city with a new eye.

“I was watching the New York streets the past days,” he said. “It really strikes me that only very few people actually seem to think that rules in traffic exist for a purpose. Why does nobody have the time to cross a street at a white [walk] sign? Why are bikes running the street in the wrong direction?

“It’s really about the ignorance of people, the ‘I am invincible’ feeling, the ‘I don’t have time,’ the ‘I am so very clever,’ the ‘Everyone is doing it,'” he reflected of rogue riders. “To me, New York has kept its own ‘character,’ but with all the different modes of transport added to it, this is becoming a massively dangerous combination.”

Meanwhile, Feldmann continues to grieve the loss of his friend, Gavin, felled in the prime of his life in a senseless act.

“He was a truly great character,” he said. “We mourn his death every single minute… . Missing him so very much.”

Police describe the cyclist in the collision as a male, with a medium complexion, around 25 years old, with brown, wavy hair, a medium build and an unknown tattoo on his right forearm. He was last seen wearing a yellow shirt, tan shorts and wearing a large black bag on his back.