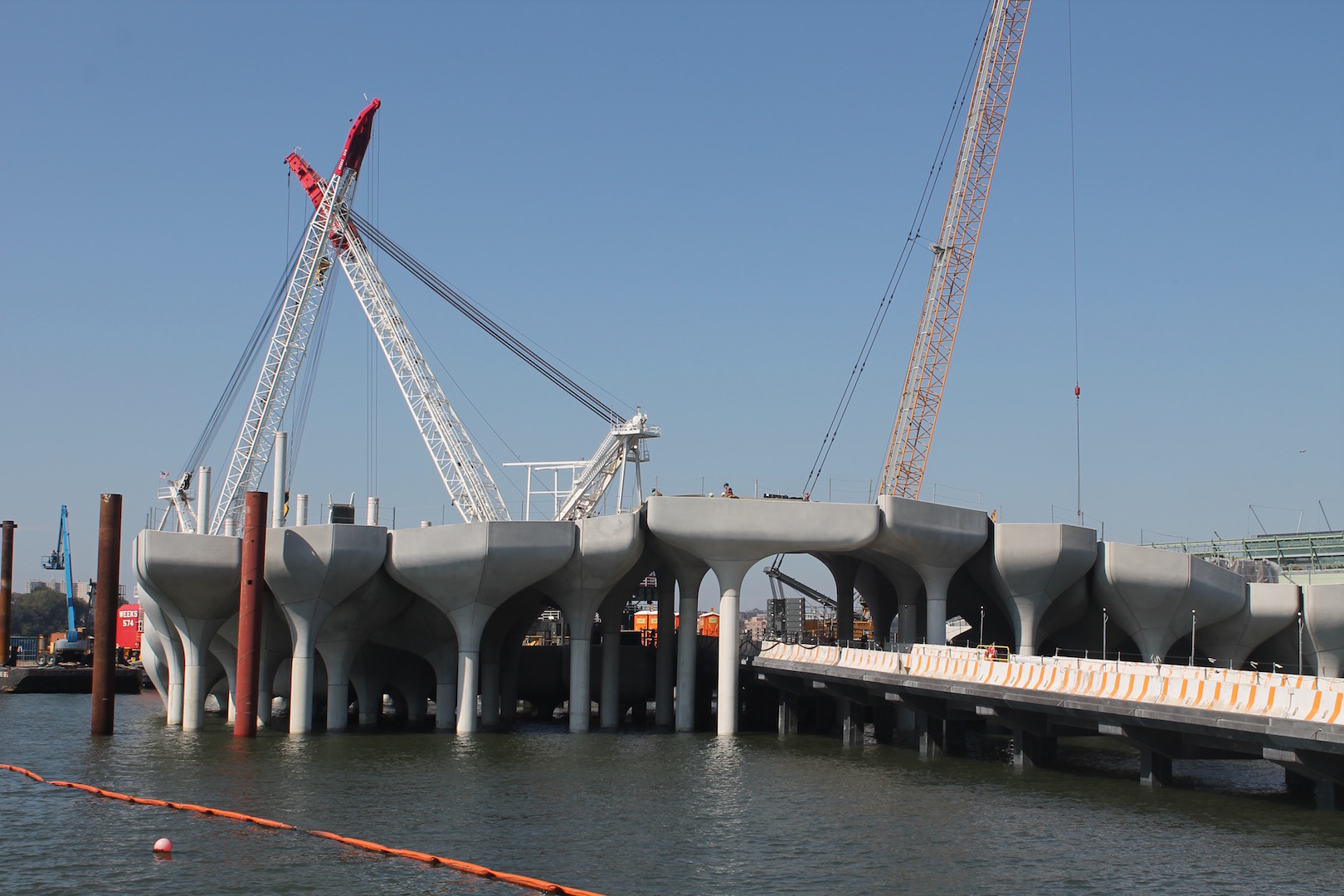 BY THE VILLAGE SUN | First it was called Pier55 — with the conspicuous absence of a space between “Pier” and “55.”

That’s distinctly unlike the way all other New York City piers’ names are written out — but, then again, this will be no normal pier.

Again, not your average pier.

And, although it will be under 3 acres in size, Little Island’s price tag, at $250 million, can hardly be described as diminutive.

The structure — designed by British architect Thomas Heatherwick, to be landscaped with lawns, trees and flowers — is currently taking shape off of 14th St., just west of the Meatpacking District. It will be connected to shore by two pedestrian bridges.

The Diller-von Furstenberg Family Foundation is funding most of the pier’s construction cost. The foundation will also operate it once it’s built, including programming it with public performances and art. Little Island will sport a 700-seat auditorium, plus two other performance spaces.

In a short video for the project, Diller says it will be “like a bit of an enchanted forest.”

“The vision is of a leaf floating on the water that you arrive at,” she explains.

“I love public art and always have,” Diller adds in the promo piece. “And you come here and there’ll be stuff going on. The performance experience will grow out naturally of the park itself. It’ll be a really lively place.

“I want this park experience to be leaving the city, going to Oz,” he says. “All of it is an oasis of everything fun, whimsical, playful that we can conjure.”

Little Island is slated for completion in May 2021, a representative reported to the Hudson River Park Advisory Council at their recent meeting.

“We’re ‘Little Island’ now,” he announced, surprising some Advisory Council members who apparently had not yet heard the news. “We’re on schedule. It’s gorgeous. All the tulips have been installed.”

Although everything is coming up roses…or make that tulips…for Little Island now, an environmental lawsuit filed by The City Club of New York against the project previously almost quashed it. Diller, at one point, announced he was throwing in the towel in the face of the opposition.

But Governor Cuomo brokered an agreement between the parties, as part of which he promised he would ensure the completion of the construction of the full Hudson River Park, which stretches between Chambers and 59th Sts., if re-elected to a third term.