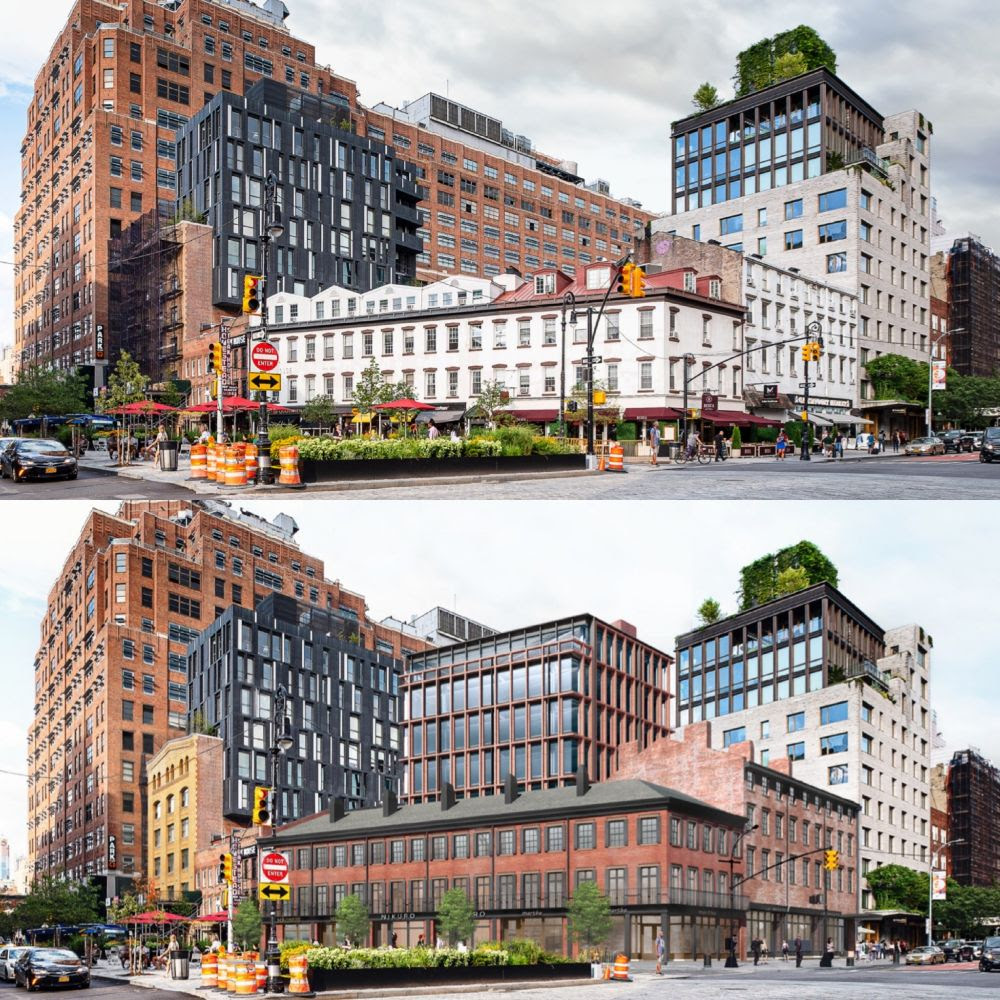 The nine landmarked 1840s row houses as they appeared before work began (top) and as they were projected to look in the original plan after a new tower was added behind them (below). (Courtesy Village Preservation)

BY THE VILLAGE SUN | Updated May 31, 2:15 p.m.: Something was indeed “undermined” in the case of nine historic Meatpacking District buildings whose facades were ordered demolished last fall — that is, the evidence for saving them.

A Freedom of Information Law request for correspondence from the city’s Landmarks Preservation Commission revealed that the agency was advised by its own structural consultant that it was “feasible” to repair the facades of the row houses at the northeast corner of 14th Street and Ninth Avenue — “and at no greater risk than would be posed by demolishing them.”

The independent opinion was provided by Donald Friedman, a principal at Old Structures Engineering, a leading consultancy firm in structural engineering for historic buildings. Friedman is on retainer to advise L.P.C. His opinion was based on his inspection of the buildings.

“In my opinion, it is technically feasible to repair the street facades, and to do so with no more risk than will be created by demolishing them,” Friedman told L.P.C. He went on to propose “an eight-stage sequence of operations for doing so.

Specifically, the letter’s signers charge, John Weiss, the L.P.C. deputy counsel, “was not forthcoming” about the independent opinion’s existence when he was questioned about alternatives to demolition at a Nov. 12 Community Board 4 public meeting. Furthermore, and even more egregiously, the letter states, the information was then also withheld from the Landmarks commissioners themselves at a Feb. 8 hearing as they continued to deliberate on the project.

Instead, L.P.C. deferred to the city’s Department of Buildings, which ordered the facades taken down — albeit with the proviso of trying to save as many of the bricks as possible to reuse in the new facade.

“It is disturbing to see that experienced professional opinion indicated that demolishing the facades of these nine landmarked row houses was unnecessary, and that this information was kept from the public, elected officials, Community Board 4 and even members of the Landmarks Preservation Commission,” Berman, and Wolff wrote. “In addition, it is clear that this information was overruled by the administration at large and we ask that you inquire of the agencies involved why it was in this case.

“Finally, we strongly urge that measures be taken to ensure that such information is never again hidden and that there are processes in place to make sure this information is publicly accessible.”

“The letter basically explains everything,” Berman told The Village Sun, “that the L.P.C.’s hired engineer examined the buildings and advised the agency that facade demolition was not needed to keep them safe, and gave them a plan for how the buildings could be restored without such demolition. D.O.B. overrode this, but disturbingly L.P.C. then withheld the information that their engineer advised them that demolition was not necessary, though they were repeatedly asked about this.”

Berman added that the preservationists “kind of knew this was the case, but until the FOIL requests came through months later, didn’t have any proof.”

Representing Tavros, the project’s developer, is Capalino + Company, the high-powered lobbying group that was involved in the contentious sale of Rivington House, a Lower East Side AIDS Hospice, for market-rate development — which involved quietly removing a deed restriction for the old former school building’s use as a healthcare facility. Ultimately, after a  public outcry, though, Rivington House was instead preserved for a healthcare-releated use and is now owned by Mount Sinai Health System for use for its behavioral sciences division.