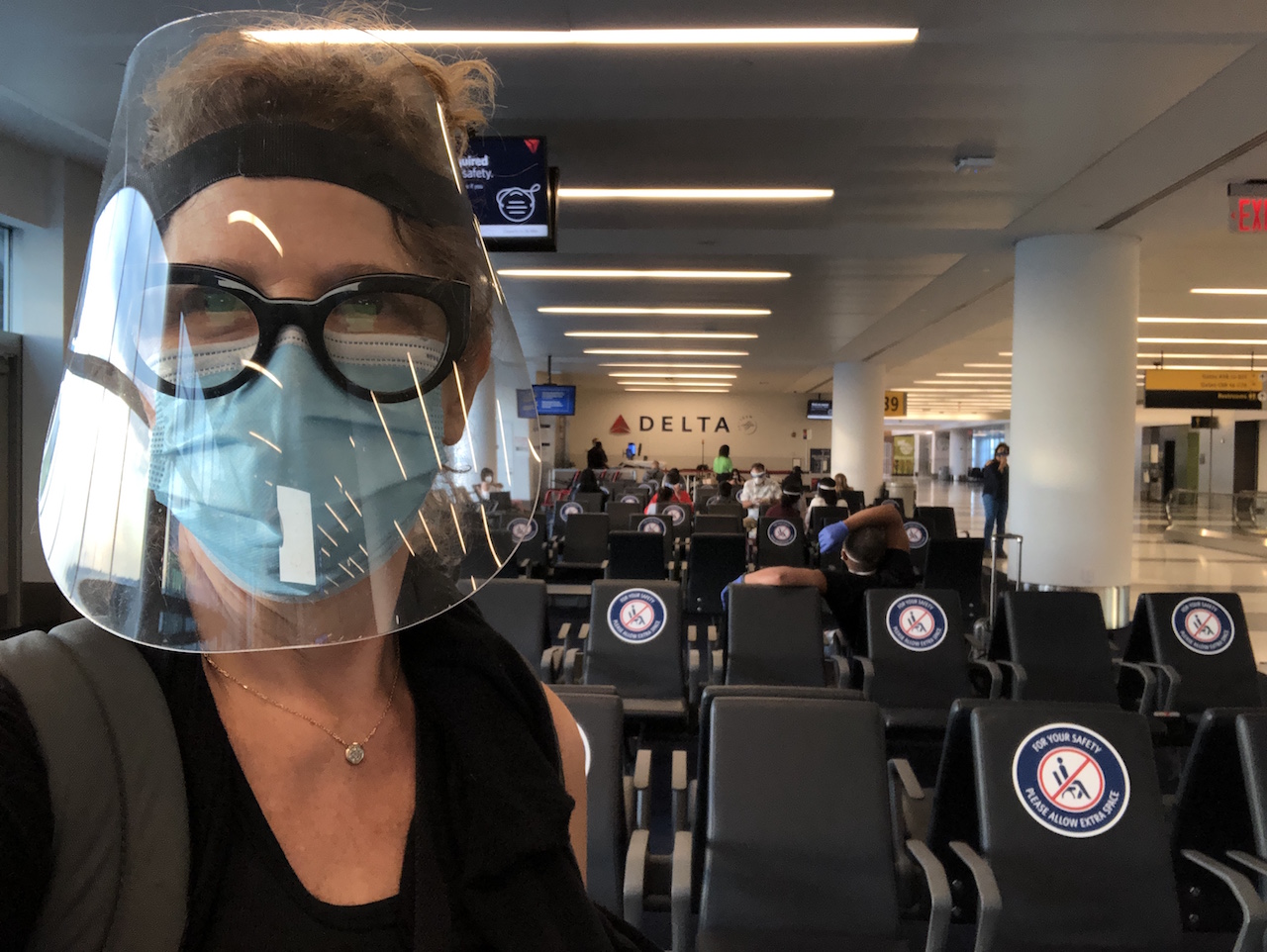 The writer waiting to board the flight to Fort Lauderdale. That half of the chairs in the waiting area were off limits for seating was an early sign giving her confidence. (Photo by Gayle Kirschenbaum)

BY GAYLE KIRSCHENBAUM | In April I canceled my flight scheduled to visit Mom in Florida in May for Mother’s Day. COVID was taking the life out of New York City, my beloved home. My primary doctor e-mailed, “Don’t go down there unless you must. You’ll be putting your mother at risk.”

As Mom was four months away from her 97th birthday, I heeded his advice.  Although, my mother and I had a horrific relationship for decades, driving me to leave home at 16 years old, by the time I hit my 50s we turned it around. She soon became my best friend and we began traveling the world together. We were Thelma and Louise not afraid to tackle anything.

As the months passed, things improved in New York City and Florida became the new global epicenter for COVID.

Mom’s birthday was approaching and I was going to figure out a way to get there. While I was looking into renting a car to drive down, thinking I would have less exposure than on a plane, Mom alerted me that she was nauseous and had crippling stomach pains. Her doctor refused to see her, fearing she might have COVID-19. Mom was on her way to the emergency room. Alarmed, I knew I had to get to her right away and that meant flying.

As it’s impossible to speak to an airline representative these days, due to reduced staff now working from home, Delta’s prerecorded message directed me to a live chat via their app. I was able to switch my flight with ease and without paying the $200 change fee.

I was prepared with all my virus-protection gear — a mask, a face shield, vinyl gloves and hand sanitizer. My flight was at 7:15 a.m. and I arrived at the J.F.K. Delta terminal by 5:45 a.m. The flight I was taking was the only nonstop to Fort Lauderdale that day. When I booked it, I asked for and received a window seat, remembering reading it was the safest seat during COVID times.

After checking in my luggage, I headed to security, where there was no one else on the T.S.A. preferred line. I breezed right through. Using the several moving sidewalks, I found my way to my gate at the end of the long terminal. Every other seat in the waiting area was marked with a graphically pleasing sign on its back indicating not to sit there.

As we boarded the plane, the flight attendant greeted each of us with a sealed Purell sanitizer wipe. I found my window seat and prayed no one would be sitting in the aisle seat near me, knowing Delta currently is leaving all middle seats open as indicated on their Web site.

As I cleaned my table, seat, arms, headrest and monitor screen, before strapping in, I looked around. No one sat by the aisle near me or in my row or in the entire rows in front of and behind me. The plane was quite empty. Perhaps because it was an early flight or the destination was Florida, the new hotbed for COVID, and it was hurricane season on top of that.

I sat feeling quite safe wearing my mask, face shield and gloves with no one in sight. When it was time for snacks and drinks, I was handed a ziplocked bag. Inside was a small bottle of water, a granola bar, a Cheez-It package, a napkin and another Purell wipe.

The smooth flight was over before I had time to finish reading the end of my book. I exited and made one bathroom stop, and found my bag was already waiting for me on the luggage belt.

I lived in fear of flying during COVID. I felt safer on the plane than in most supermarkets. I’m grateful for Delta taking all the necessary precautions. They have even turned a plane around when two passengers refused to wear masks. As long as Delta is flying where I have to go, they will be my airline of choice, especially during coronavirus times.