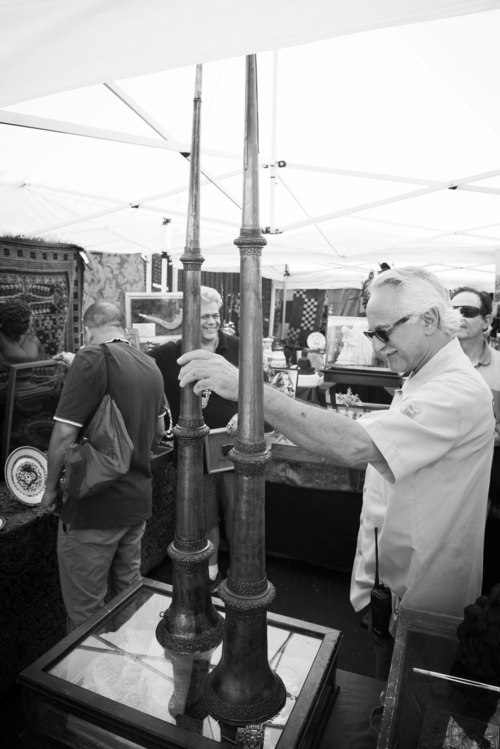 BY HARRY PINCUS | I lost an old friend in this new year.

As of last weekend, there was no gaggle of vendors, tables or racks at the Chelsea Annex flea market, which was the last remnant of a great tradition. I imagine a new condo will soon rise up, in its place, full of unhappy people looking at phones as they quickly walk past the new bank or CVS on the ground floor.

It’s true that the logarithms at eBay say, “We have everything,” and indeed, you can still order a CD from Amazon. But I’ll never see my old friends again, or the bizarre array of unexpected artifacts they provided, almost as a general service for the public, every weekend.

Where else could you find your mother’s kitchen clock from the 1950s, or your Uncle Joe’s Sputnik chandelier? I would have to pass on the Nazi memorabilia or the bronze bust of Hitler sold by some folks who looked like they didn’t know who he was, but you never did know what goodies you might find.

I first discovered the flea when I was living in Paris, back in the Seventies. The Marché aux Puces at the end of the Metro line at Porte de Clignancourt was the only form of entertainment I could afford, along with Le Petit Salle at the Cinémathèque Française. The large room, where feature films were presented, occasionally with the stars or directors present, cost at least the equivalent of a dollar. But my old friend Henri Langois ran classic silents and early talkies in pristine condition in Le Petit Salle, for just 3 francs!

Along with the Cinémathèque, I could often be found at the Marché aux Puces almost every weekend, munching on a bag of pomme frites avec moutarde, hunting the only little fragments I could afford from les clochards (the bums) hawking their wares at the edge of the market. The rest of the flea, with its antique books, grand furnishings and works of art, was an education in and of itself.

There were World War I artifacts and  garments made of an old corduroy material that looked like it could stand up by itself. When I sought the stuff out elsewhere, I finally found an old merchant who told me that the last mill that produced it had just been closed.

Although I couldn’t afford much of anything, I did bring back a splendid plaster death mask, a tiny little leather notebook with the ominous date of 1929 on the cover, and a 19th-century frock overcoat with flat silk buttons. I saved the coat from a mountain of garments that a group of clochards was about to burn on a cold winter afternoon. I ended up wearing it one Halloween, when a hedge-fund friend pulled me along for dinner at the Four Seasons with his partner, George Soros. By then, the flea market frock had been christened with some dried potato salad at a Soho opening, and as I looked around the Pool Room for celebrities, all eyes were on the clown in the filthy frock coat sitting at the corner table, regaling George Soros.

Back home in Manhattan, I often took disapproving friends and girlfriends to the old flea market on Canal St., which featured blaring old speakers and prosthetic limbs. Another group of street folk took their chances with the police and sold things more informally on nearby Howard St., along a stretch that was so redolent that we called it Piss Alley. Piss Elegant today, I suppose, but I still have a nice set of tools from there, which must have “fallen off a truck,” and a photo I took of an arrest, which I duly did an illustration of for the Daily News.

The grand Chelsea Annex and Garage, along Sixth Ave. in the 20s blocks comprised several whole blocks in those days, as well as a nearby parking garage. Many of the pickers and sellers seemed to have experienced former glories, such as the old showgirl with the incongruous gold Rolex; or the former Russian Olympic wrestling coach, who was said to “like it rough,” and showed up every weekend with black eyes and bruises, along with a table full of rare antique timepieces.

I probably ruined my friendship with an old art school colleague, when I asked him to sell my mother’s furniture at the flea market after she had passed away. The massive mid-century blond pieces, by a Brooklyn designer named Harvey Probber, weighed a ton, and were covered with so much cigarette smoke (yech) and bad memories that I could barely look at them. My friend had been assured by an aristocratic picker that Harvey Probber was a designer “whose day will come. Not yet, maybe, but it will come!” After that, my poor pal schlepped the unwanted tonnage in from Long Island every weekend in his tiny, overwhelmed pickup truck, growing more and more aggravated each week.

“You and your Hairy Prober!” he would scream at me, before he was finally able to unload the stuff for 200 bucks. Sure enough, Harvey Probber did eventually have his day, in the form of a major retrospective at the Cooper Hewitt, and whoever it was who eventually absconded with the Hairy Prober got a real bargain.

The flea market reminded me of the old Brooklyn cafeterias where my father would “nurse” a cup of coffee for a dime, while characters with watches or wallets to sell would go from table to table. There was a great fun to it all. How can I forget watching Michael Feinstein racing down the street from the Garage with armfuls of old 78 RPM records, and his hair half-colored and partially set, or nasty Trumper Roger Stone trying on used fedoras?

One extremely frozen day, I was informed that the lady whom I had been too cold to notice standing right beside me was Blondie (Debbie Harry). I never did see Warhol there, but Chris Rock’s uncle ran the trucking operation, and that was famous enough for me.

Aside from any errant celebrities, there was a moving cast of characters. Like my old friend who occasionally arrived with antique eyeglasses and old transistor radios, boasting of his “FREE” liver transplant from Mickey Mantle’s surgeon, as well as a mouthful of implants, all thanks to Medicaid!

I have a photograph of my friend, proudly lifting his shirt to show off his scars, which I shall cherish, but it’s a new year, and I’ll spare you.