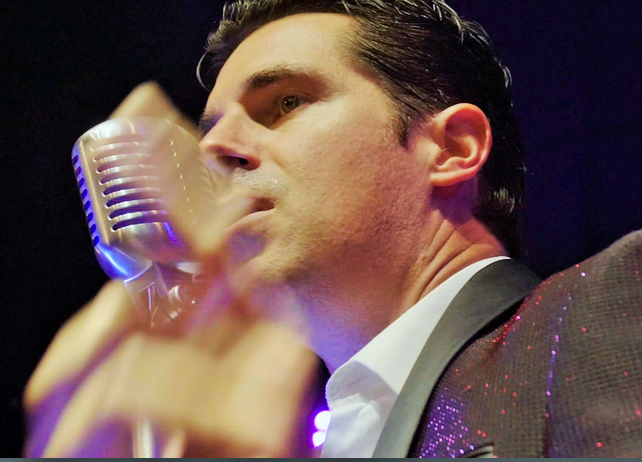 Flavored with notes of Elvis and Jerry Lee, ‘Rockabilly Christmas’ is a delicious treat

BY STEPHEN DiLAURO | If there’s a war on Christmas, as pundits on the right are wont to say, the memo did not reach Swing 46, a supper club in the heart of Manhattan’s Broadway Theater District. Nor did it reach Shea Arender, the driving force behind “The Original Rockabilly Christmas,” now in previews and running December 3 – 30 at Swing 46.

Arender is also a strong contender for the hardest-working young man in show business. In addition to singing and dancing his way through a seamless evening of first-rate entertainment, Arender is a Broadway producer of jukebox musicals, a composer-arranger, and the owner and C.E.O. of the Las Vegas Symphony Orchestra. With his energy level, that’s probably all before breakfast.

Arender, his seven-piece band and two featured female singers hit every right note in Christmas tunes that rock and enchant. This tight performing team also takes the audience on a musical journey through the history of rockabilly and its roots in swing. It doesn’t hurt that Arender’s voice has just enough Elvis in it to make this show a barnful of fun.

There’s some clowning around about blue suede shoes between Arender and vocalist-comedienne Sarah Hayes, and guess what song follows. Arender is anything but an Elvis impersonator, though (despite the obvious Vegas polish to the program). He’s very much his own fun class act. It is unmistakable and genuine verve on display when he sings songs like “Blue Christmas” as he enters through the audience, “Rip It Up” and a heartwarming “I’ll Be Home for Christmas.”

I’m not certain how many previous runs the show has had but it comes off like a well-oiled machine. The ensemble is terrific. The program’s musical director and piano player, Robert Cookman, shows off on a couple of Jerry Lee Lewis tunes.
Sarah Hayes is an entertaining sidekick throughout, making jokes and getting the audience to sing and clap along. Her rendition of “Santa Baby” is smoldering and she and Arender do a medley of Christmas classics.

The second backup singer, Jade Litaker, becomes a soulful powerhouse when she takes center stage to sing “I’ve Got My Love to Keep Me Warm” and “Zat You Santa?” and reveals herself as just plain outstanding.

New Yorkers who take advantage of the holiday spirit on display at “Rockabilly Christmas” can thank producer Sonia Carrion of “The Girl Behind the Curtain” for bringing this show to town, and publicist Gail Parenteau for making sure you know about it.

As to the food, my companion raved about her steak. My roast chicken was O.K. You can see the show without eating, if you’re so inclined.