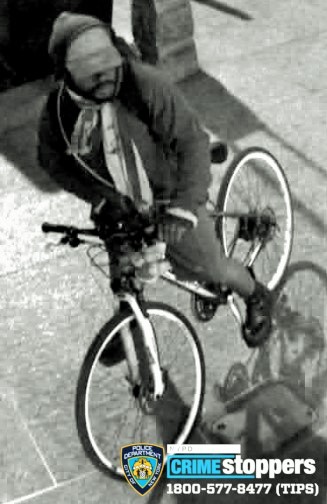 BY THE VILLAGE SUN | A woman on an early-morning run along the Hudson River bikeway Sunday morning was sexually assaulted and robbed by a cyclist, police said.

According to cops, a 39-year-old woman was jogging northbound on the bike path past Pier 40, at Clarkson and West Streets, at 6:10 a.m. on March 27 when she was approached by an unknown man riding a bicycle.

The cyclist pushed the victim to the ground and began to choke her. He then sexually assaulted her and stole her cell phone.

Asked about the nature of the assault, a police spokeswoman said, “He forced her to perform oral sex on him.”

The attacker then fled on his bike in an unknown direction.

E.M.S. responded and transported the victim — who suffered bruising and pain — to the hospital for evaluation.

The suspect is described as around 20 to 30 years old, 5 feet 9 inches tall and weighing 180 pounds, with a dark complexion and beard, and last seen wearing dark clothing.

A police media release about the incident said the woman was running on the “jogging path.” There is the bikeway and also the nearby riverfront esplanade of Hudson River Park, but joggers often opt to run on the bikeway, making it a de facto “jogging path.” However, the police spokesperson said it was unclear from the information she had whether the victim was running on the bikeway or closer to Pier 40. The riverfront esplanade gives way to a sidewalk in front of Pier 40.

The Hudson River bikeway is said to be the most heavily used in the nation.

Pier 40, boasting a massive artificial-turf playing field in its cavernous courtyard, is known locally as the Downtown community’s sports pier, where young Greenwich Village Little League and Downtown United Soccer Club players practice and have their games. Parents consider it a safe space for their kids.

Police ask that anyone with information regarding the suspect’s identity call the N.Y.P.D.’s Crime Stoppers Hotline at 1-800-577-TIPS (8477) or for Spanish, 1-888-57-PISTA (74782). Tips can also be submitted on the Crime Stoppers Web site at WWW.NYPDCRIMESTOPPERS.COM or on Twitter at @NYPDTips. All tips are strictly confidential.