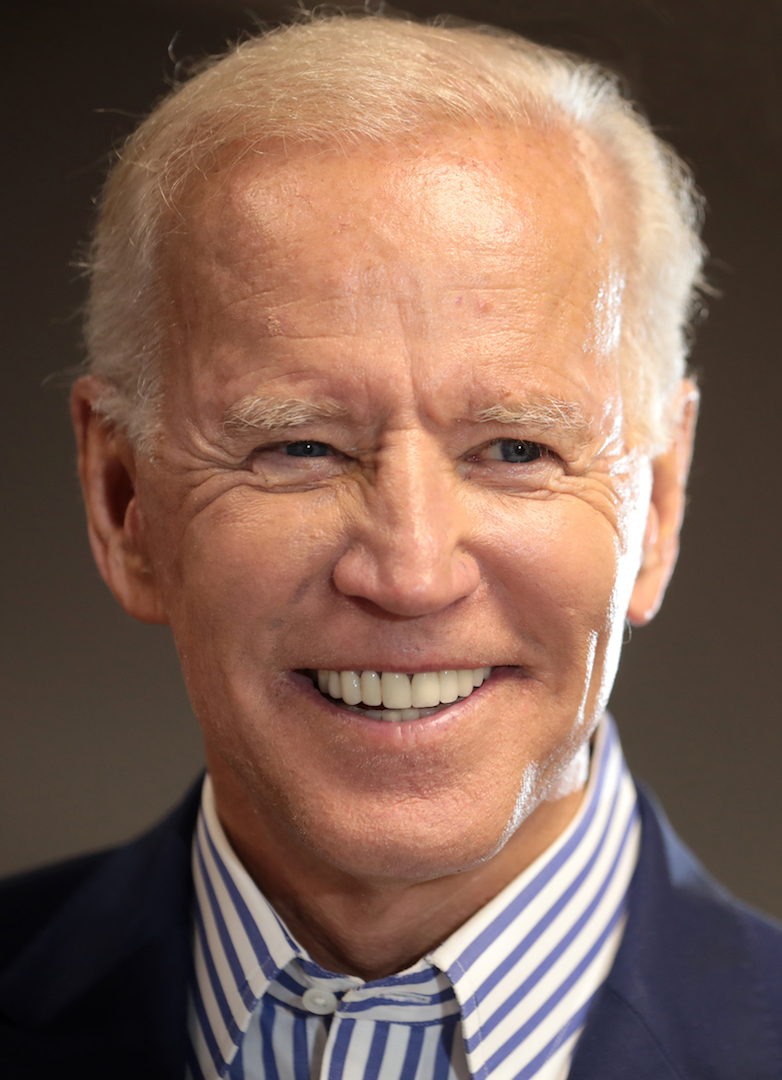 BY MARY REINHOLZ | Last spring there were reports of multiple women coming forward to complain about Joe Biden touching them inappropriately in public during his lengthy career as a self-described “tactile politician.”

One of his eight accusers, Tara Reade, who was briefly Biden’s assistant in 1993 when he was in the U.S. Senate, claimed he used to run his fingers along her neck and touch her shoulders in ways that made her feel uncomfortable.

As reported this year, Reade, 56 — a freelance writer, victims advocate and former model — expanded her complaints about Biden’s behavior in several media venues, including a podcast by progressive host Katie Halper that was released March 25. (In addition, Halper published a story in The Guardian on Fri., April 24, saying Reade’s story deserves to be told.)

In the podcast, Reade claimed that the former vice president, now the Democratic Party’s presumptive nominee for president,  pinned her “up against a wall” in a vacant Senate office in 1993, and then reached under her skirt and penetrated her with his fingers after she brought him a gym bag that he had requested.

Reade said she pushed Biden away and claims he told her irritably, “Come on, man! I heard you liked me.”

She continued: “It was like everything shattered in that moment. He was, like, my father’s age. He was this champion of women’s rights in my eyes. I couldn’t believe it was happening.”

What hurt her the most, Reade told Halper, was Biden allegedly getting angry after she resisted him, claiming he pointed in her face and said, “You’re nothing to me.”

Two of her friends and Reade’s brother have confirmed that she had told them of a traumatic experience with Biden, according to several outlets, including The New York Times.

The Biden campaign has adamantly denied Reade’s bombshell allegation, saying the alleged incident never happened and noting that the Catholic candidate from Delaware is proudest of being the author and promoter of the Violence Against Women Act, signed into law more than 25 years ago.

No employees who worked with Reade recall her mentioning sexual abuse by her boss, although some former interns she supervised recall how she was abruptly transferred to another position, the paper said.

Now a single mother living in Northern California, Reade has since earned a law degree in Seattle after leaving her Senate job, which reportedly lasted from December 1972 to August 1973. She claims Biden’s office eventually forced her out of her job, after she filed a complaint against him in the Senate. But she has no record of the complaint. Neither, apparently, does Biden’s Senate office.

About two weeks ago, Reade filed a criminal complaint with the Washington, D.C., Metropolitan Police, accusing Biden of sexual assault in 1973. Reade has acknowledged the statute of limitations has run out on her charges, but said the complaint gives her a layer of “safety.”

Reade has claimed that she has been a target of death threats since she first accused Biden of inappropriately touching her, saying she was fearful to say more at the time. She has also accused Biden supporters of smearing her as a “Russian asset” after she wrote a 2018 post, since deleted, praising Russian leader Vladimir Putin.

Reade, who reportedly voted for Bernie Sanders in the California 2020 primary, told Newsweek that she decided to come forward with her new claims to ensure that “powerful men” are held accountable for their actions.

“I was trying to have a deeper conversation about sexual harassment in the workplace and powerful men,” Reade said. “I’m not going to get traditional justice, like with  the [Harvey] Weinstein’s case. I’m looking for something more existential — to not have to keep a secret because it’s about somebody powerful.”

New York Democratic women reacting  to her painful story — which has no corroborating eyewitnesses — expressed a range of opinions and emotions to this humble scribe. Some say they’re worried that Reade’s searing charges against Biden, the first of their kind against the married Catholic pol, will only help reelect Republican Donald Trump, who has been charged with numerous instances of sexual misconduct against women.

Others are simply dismissive. At least half a dozen politically engaged local women did not respond to requests via e-mail to comment on Reade’s claims for The Village Sun. Two of them said they had been preoccupied in coping with the coronavirus and hadn’t given the subject much thought.

“I know nothing about it,” said Lois Rakoff, a West Village resident and member of the Village Independent Democrats club who is currently looking after her three grandchildren in Cambridge, Massachusetts. She asked for a description of Reade’s assault charge against Biden, and, when told, exclaimed, “That’s pretty severe! I’m surprised [Reade] didn’t run out screaming in the streets and make headlines in 1993.”

Rakoff acknowledged that the #MeToo movement didn’t exist 27 years ago, but insisted that females in the 1993 workforce “were not meek little women who kept their mouths shut. So I’m puzzled,” Rakoff said, of Reade’s previous long silence.

(More on #MeToo later, which has been accused by critics on both sides of the political divide for failing to live up to its “Believe the Woman” mantra from the Weinstein casting couch era.)

A left-leaning clinical psychologist and former New York University adjunct professor said she has not decided if Reade is being truthful.

“Oh gosh, I just can’t be certain. It’s possible,” she said, requesting anonymity. “I know for sure that Joe is a touchy-feeling person, but somehow have a hard time imagining him putting his finger up someone’s twat. Yet I’ve certainly believed all the other women’s complaints against Trump and Kavanaugh,” she went on.

She was alluding to at least a dozen women accusing Trump of rape and sexual assault, and to Christine Blasey Ford’s 2018 claims before the U.S. Senate’s Judiciary Committee that Brett Kavanaugh, now an associate Supreme Court Justice, tried to rape her during a party when they were teenagers in Bethseda, Maryland. Kavanaugh was exonerated.

Some of Reade’s supporters include celebrities like Susan Sarandon, John Cusack and Rose McGowan. But she also has well known detractors. Susan Brownmiller, Jane St. resident and author of the bestselling second-wave feminist book on rape “Against Our Will,” calls Reade a liar.

“I believe the world contains liars of all kind who sense an opportunity for money, publicity, etc.,” Brownmiller said in a statement sent to Village Sun Editor Lincoln Anderson.

In contrast, community activist Marni Halasa, who tried without success to unseat New York City Council Speaker Corey Johnson in 2017 and plans another run for the Council in 2021, said she believes Reade’s story. She has “mixed feelings” about voting for Biden should his name be on the ballot for president on Nov. 3.

“I think a lot of progressives feel that way about him,” added Halasa, who was reached at Chelsea Piers, where she teaches figure skating. “I was a [Bernie] Sanders supporter. Obviously, everyone wants Trump out of office. I have mixed feelings about voting for Biden and about these allegations. I do think a centrist would not be as terrible as Trump.”

Halasa, however, criticized Biden for not “directly” responding to Reade’s claims.

“Biden should come clean but he probably won’t,” she said.

She blasted the mainstream media for being “a little bit hypocritical” in not covering the story earlier after quickly reporting on Trump’s purported transgressions with women.

The Village Independent Democrats, a progressive club, voted April 9 in a virtual meeting to endorse Biden for president over Bernie Sanders by 28 to 12 votes with two members voting for no endorsement. No one even brought up the Reade allegation in recorded comments of members before they voted.

However, club President David Siffert said in an e-mail that, speaking for himself, he was “deeply troubled” by Reade’s revelations.

“The idea that we likely will have a presidential race between two people accused of sexual assault is disturbing at best,” he wrote. “I will add only that, by every possible axis of picking a president, Joe Biden is the better candidate than Donald Trump. It is clear that Joe Biden will be the Democratic nominee, and our choice is between him and Donald Trump. As a result, I have no hesitation in endorsing Joe Biden. That in no way diminishes the seriousness of the allegations. It only acknowledges the reality of the alternative.”

Former Democratic District Leader Keen Berger participated in the virtual V.I.D. meeting and voted to endorse Biden. In a telephone interview, she said that he was not her first choice as a presidential candidate.

“Elizabeth [Warren] was first and Biden was low on the list, but the goal now is to defeat Trump,” she said. “We live in a bubble in New York City; so when all these people from other parts of the country voted for Biden, I thought, ‘Well, O.K., I believe in democracy more than my own opinion.'”

Asked if Tara Reade’s allegations of sexual assault would hurt Biden as his campaign progresses, Berger replied: “I don’t think it’s going to be much of anything compared to what Trump had done in terms of sexual harassment. It’s not nearly as bad.

“I care about people who are dying because Trump was slow on the coronavirus outbreak,” Berger said. “I care about children in cages at the border. This is not a serious problem, even if it is true, because it happened a long time ago, and I don’t think people should be held for something unless it was really cruel and awful. He didn’t rape her.”

Reade, however, claims she was digitally raped by Biden and apparently wants to push back against the “smears” she believes will be coming her way. She applied for assistance from the Time’s Up Legal Defense Fund, which helps #MeToo movement sexual-assault survivors tell their stories. But in February, Time’s Up turned down her application, claiming that because it involved Biden’s presidential run, the case would jeopardize the organization’s nonprofit status.

The Intercept reporter Ryan Grim also noted that the public-relations firm handling the Time’s Up Legal Defense Fund is SKDKnickerbocker, whose managing director, Anita Dunn, is “the top adviser to Biden’s presidential campaign.” Grim wrote that a Biden spokesperson declined to comment.

The reporter also wrote that Reade is “deeply conflicted” about continuing to come forward, “given that Biden’s opponent in the general election is someone she sees as far worse politically.”