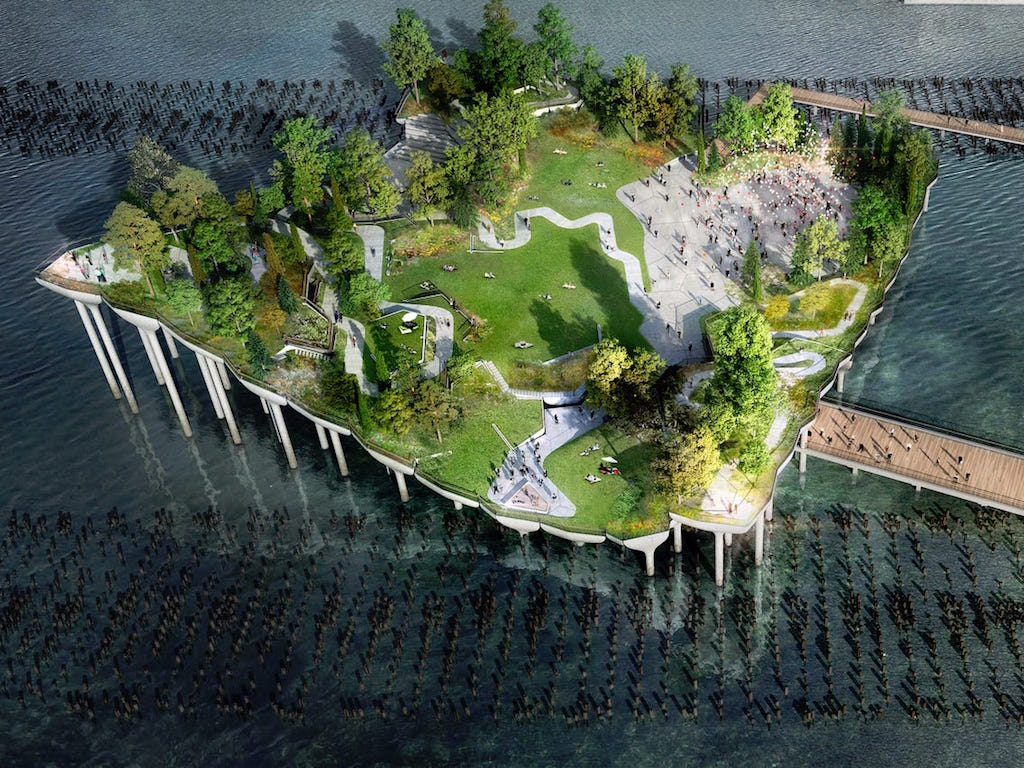 C.B. 2 wants alcohol use to be confined to Pier 55's main plaza area on non-performance nights.

BY LINCOLN ANDERSON | There’ll be no free-range alcohol at Pier 55 if Community Board 2 gets its way.

On Thursday evening at its monthly full-board meeting, the Greenwich Village body voted to approve a resolution that would confine beer and wine imbibing to the pier’s 12,100-square foot main plaza, except for during permitted events in two of the pier’s designated performance areas.

They also said that alcohol served on the main plaza should be cut off at 10 p.m., except on Fridays and Saturdays, when it could keep flowing until 11 p.m.

Pier 55 a.k.a. Little Island a.k.a. Diller Island, the ambitious $250 million “entertainment island” off of W. 14th St., is nearing completion and on track to open this spring. The project is largely funded by the Diller-von Furstenberg Family Foundation, in the largest single gift to a park in New York City history.

Media tycoon Barry Diller’s Pier 55, Inc., will operate the island, programming it with a range of public performances, from music concerts, theater and dance to readings and talks, plus art, film and more. There will be a 689-seat waterfront amphitheater overlooking the Hudson River, as well as a more intimate performance area, the Glade, at the pier’s southeastern corner. The structure will be lushly landscaped, even sporting majestic metasequoia trees.

In addition to arts and entertainment, beer and wine will be on the menu. Pier 55, Inc., and Savory Labs, LLC, doing business as Little Island, Pier 55, are applying for a “tavern wine license” to operate four bars on the 3-acre pier. Diller and Co. would like pier-goers to be able to wander about with their wine or beer anywhere they please on the undulating island, except for the pier’s lofty southwest corner, which is perhaps a little steep for people swigging brews and Bordeaux, some of them perhaps in Manolo Blahnik high heels. Hard liquor, though, would not be allowed under the license.

Diller’s team also wants the whole pier to be awash in beer and wine all day, every day, from 11 a.m. until 11 p.m.

The events at the amphitheater will end at midnight. The pier operator opposes a 10 p.m. alcohol cutoff because, according to Trish Santini, the Little Island’s executive director, they want people to be able to enjoy a drink while “discussing the performance” they have just watched.

Like the rest of Hudson River Park, the pier’s curfew will be 1 a.m.

But some neighboring residents think a “booze without borders” approach to the pier would brew up a disaster. Concerned locals turned out at several prior State Liquor Authority committee meetings to voice their disapproval of the idea. They also called for cutting off beer and wine much earlier — one hour after sunset.

In addition, in their resolution, C.B. 2 pointed out, “The vast majority of alcoholic consumption being proposed in this application will occur on Little Island when no permitted events are taking place.”

The board’s resolution further noted that by restricting alcohol to the park’s central plaza except for during performances, it would allow other pier-goers to enjoy the Little Island in peace without having to deal with people roaming around swilling alcohol all over it.

Per the design, the pier’s central plaza will have two bars, along with 100 tables and 300 seats, while the amphitheater and Glade will also have one bar apiece to service them. On nights without events, the bars at the Northwest Overlook (next to the amphitheater) and Glade should be closed and “stored in the undercroft,” C.B. 2 said, referring to storage hatches inside the pier deck. And these two bars should basically only be open to serve drinks around the time of performances, not all day, they added. Meanwhile, the board was O.K. with the two bars serving the main plaza area being open every day.

As the C.B. 2 resolution puts it: “Limiting the service and consumption of alcoholic beverages [to] the Main Plaza will…allow for Park users to enjoy the Park and its public spaces without the concern or the imposition [of] there being the consumption of alcohol beverages in virtually all locations of the Park, while also giving the other park users the privilege of enjoying alcoholic beverages in a designated area of the Park that can properly support that activity while not offending and/or impacting all users.”

The resolution noted this separation would be consistent with the way alcohol is allowed in “permitted spaces” in the High Line park and at the Delacorte Theater in Central Park.

Pier 55, Inc., has agreed to 24/7 security for Little Island. And, in an effort at compromise, Pier 55, Inc., had proposed that people not be able to buy more than one drink at a time. Though, on Thursday night, C.B. 2, apparently feeling generous, boosted this cap to two drinks per purchase.

The Pier 55, Inc., team, however, would not compromise on “free-range alcohol” on the pier or agree to ending alcohol sales on nonperformance nights at 10 p.m.

In general, board members strongly support the Pier 55 plan, but they are concerned about the impact that alcohol on the pier could have on the Hudson River Park and surrounding area.

Before they voted to approve the resolution, board members had a vigorous discussion, mainly about whether pier-goers with alcohol should be confined to the pier’s main plaza, meaning what Pier 55, Inc., calls the Play Ground — the flat, paved area that will have tables, chairs and bathrooms near the pier’s eastern edge.

Dan Miller was a strong advocate for the “let them amble around with their drinks” school of thought. He contrasted Pier 55 with the Hornblower booze cruises that operate out of the nearby Pier 40, at W. Houston St.

“Unlike Hornblower Cruises — the sole purpose is to get on that boat, get drunk — this is for the community,” he said of Pier 55. “To say that this is going to be a drinking establishment is a false narrative.”

Miller also said that not letting people move about with their beverages would deprive them of the stunning views that the pier will offer.

“What I’d like to see is to have people freely roam,” he said, “to let people see the sunset; to be able to enjoy the best parts in Little Island, which is not in the central plaza.”

Scott Sartiano, another C.B. 2 member, is a prominent nightlife operator, having been involved in places like Butter, 1Oak and Up & Down. He will be launching Zero Bond, a London-style private members club in Noho, once the pandemic lifts. He opposed the restrictions for Pier 55.

“Probably half the liquor licenses in our district are not going to reopen, so we have to be a little friendlier,” he said. “Liquor — wine, beer — are not the enemies. It’s bad operators. The operator has a good reputation. And this is a park like no other. It has a European cool flavor to it.”

“It’s not going to attract a rowdy, clubby crowd,” offered Kristin Shea. “I think being able to be outdoors and have a glass of wine and not going to a bar is so special and what sets this apart — especially during COVID.”

In other words, as opposed to bars, the pier will be good for social distancing, she meant.

Shea added that Pier 55 was designed with noise mitigation in mind, by using noise-absorbent materials. But others skeptically said that nothing about the pier has been “tested” yet.

Other board members, including David Gruber, said Pier 55, Inc., should just “go slow” at first, then come back to C.B. 2 later and request more permissions.

“I don’t see a problem if they go slow for the first year,” he stated.

Gruber noted that C.B. 2 members are experts on liquor licenses, and their opinion should be respected, since there are probably more liquor-license applications from the board’s district than anywhere in New York State.

Mar Fitzgerald said she was “uncomfortable with the push” by some on C.B. 2 to accommodate the Pier 55, Inc., team’s demands.

Susanna Aaron said she really liked the idea of “being able to have a glass of champagne and walk around the park.” But she noted that other parks don’t allow this, so in a spirit of equity, she could not support it.

“I’m concerned about alcohol in a public park,” said Georgia Silvera Seamans. “A bottle of wine is 14 percent alcohol. This park, if it is a public park, should be like all other parks in the Hudson River Park.”

In the end, the board approved the resolution — both mostly confining alcohol to the park’s main plaza and cutting off alcohol sales at 10 p.m. except for Fridays and Saturdays — by a vote of 33 yes, 10 no, one recusal and one abstention. The resolution’s language states that the board supports “denial” of the wine tavern license unless Pier 55, Inc., agrees to the C.B. 2 stipulations.

However, community board opinions are advisory only. Ultimately, the State Liquor Authority will decide if the Little Island will be licensed.