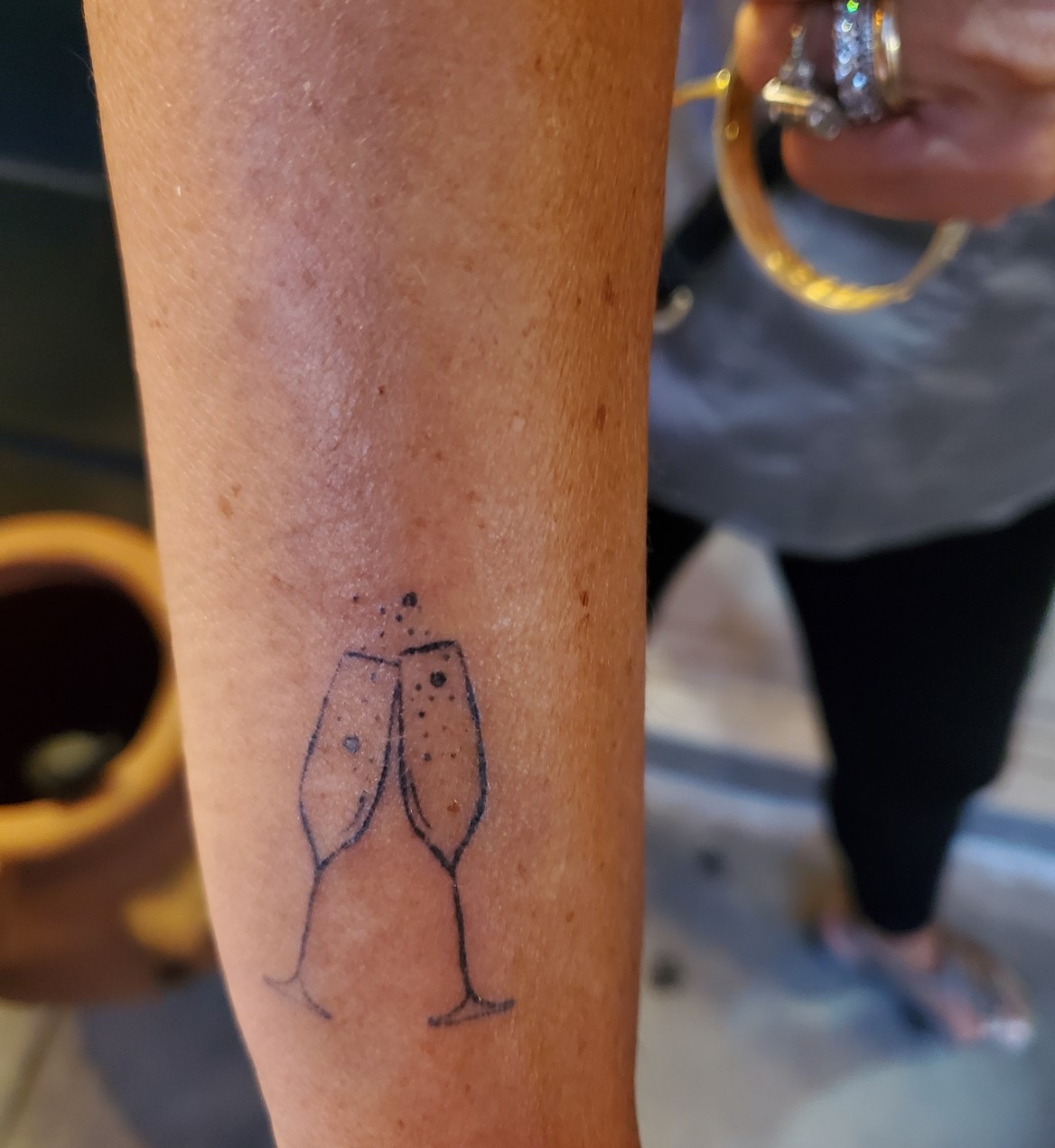 Sara Kimbell got an ephemeral tattoo on her forearm. (Photo by The Village Sun)

Fear of commitment? Try tattoos made to fade

BY JASMINE SHIFFER | For 12,000 years of body art history, tattoos have been, by definition, permanent. But at Ephemeral Tattoo in Brooklyn, tattoos are made to fade. Their special ink formula breaks down naturally in the body, and in nine to 15 months, your ephemeral tattoo is gone.

“We give people an opportunity to participate in tattoo culture without having to commit to it forever,” said Kate Messinger, head of content at Ephemeral Tattoo.

The first Ephemeral location, at 111 North Fifth St., in Williamsburg, opened last year. It’s a sleek, modern studio, with a professional staff to match. Already, the company has expanded to Los Angeles, San Francisco, Atlanta and Houston, with another location coming soon in Miami.

“The only place to get an ephemeral tattoo is at one of our studios,” Messinger said. “So we’re rapidly expanding.”

According to Messinger, the company’s specialty ink is made with vegan, biodegradable and bioabsorbable ingredients, all F.D.A.-approved. The ink is still applied with a needle, but it sits closer to the surface.

“When you get a permanent tattoo, the ink has really big particles and it just sits in your skin,” she explained. “With Ephemeral, the particles are smaller and they break down over time.”

For many who’ve been on the fence about getting a tattoo, this is a game changer.

Sara Kimbell, who lives in Greenwich Village, had been toying with the idea of a tattoo for a while when she heard about Ephemeral.

Judaism forbids tattoos, which had held her back, along with doubts about what tattoo she would get. But when her daughter came home from college with an ephemeral tattoo from the Williamsburg studio, she was intrigued.

Driving by, they passed the Los Angeles Ephemeral location and stopped in to take a look.

“I was asking questions, and then before you knew it, I got a tattoo,” she said, laughing. “They were just so nice and so accommodating.”

Kimbell worked with the tattoo artist on the design: two bubbling glasses of champagne, clinking on her wrist.

Ephemeral Tattoo got its start in pursuit of that peace of mind in 2014, with Brennal Pierrre, Vandan Shah and Joshua Sakhai, three students at New York University’s Tandon School of Engineering. None of them had tattoos for a variety of reasons — family, religion, ambivalence — and they began to wonder why tattoos had to last forever.

Using their hours in the lab, they started to work on a new disappearing tattoo ink, testing it on themselves at first. The ephemeral ink has continued to improve from year to year.

“We’re constantly testing new types, different colors. We only have black right now,” Messinger said, pointing out a particularly intricate ephemeral tattoo of hers. “A year ago, I don’t know if we could’ve done this.”

Messinger attributes a lot of Ephemeral’s growing versatility to their clients.

“People have been really thinking about how to use the ink in different ways,” she said. “The Y2K/’90s resurgence is back, so people are getting lower back tattoos, and maybe you don’t want that forever.”

Messinger can see tattoos becoming temporary trends. Other customers have come into the studio to try out a design before they commit to it forever. Actors have even come in for tattoos specifically for their roles.

“We’re not trying to reinvent an industry, we’re just adding some innovation,” Messinger explained. “We want to honor what has come before.”

Ephemeral Tattoo sends every client home with an aftercare kit to help with an even fade.

“I’m going to miss it, I have to say,” said Kimbell of her ephemeral tattoo. “I’m sure I’ll get another one when it’s gone.”

Ephemeral tattoos cost $200 to $550 depending on the size. For more information, visit ephemeral.tattoo.