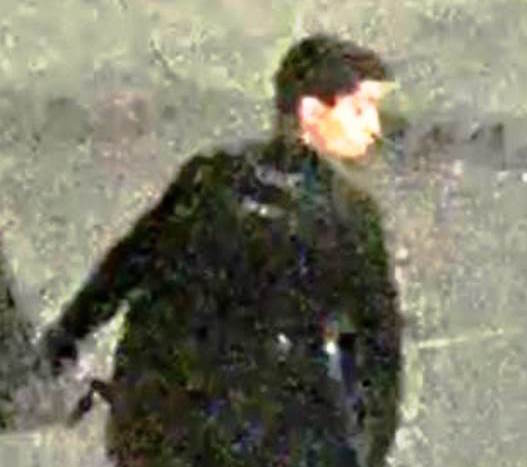 A surveillance photo of the suspect in the alleged assault on a police officer on University Place. (Courtesy N.Y.P.D.)

BY THE VILLAGE SUN | Police say they recently arrested a man who threw a brick at a police officer’s head in the Village during the height of the protests and unrest after the killing of George Floyd.

To make the collar, police were aided by surveillance video and police body camera video — along with an assist from Facebook and Lyft.

In the incident, on Sat., May 30, around 10:22 p.m., the suspect allegedly heaved a brick, striking a 35-year-old male officer in the helmet, then fled westbound on E. 11th St., then southbound on Fifth Ave.

The officer suffered a cut and swelling to his face. E.M.S. transported him to an area hospital, where he was treated and released.

On July 20, at 8:30 a.m., police arrested Christopher Cabrera, 25, of the Bronx, in connection with the incident, initially charging him with two counts of assault and one count of riot.

The two top charges are C felonies. According to the D.A.’s Office, the maximum sentencing range for a C felony is five to 15 years behind bars.

The case against the defendant so far has been built with video — both surveillance camera and police body camera video — as well as a Lyft app-hail ride and some social-media sleuthing, including perusing Facebook photos.

Police recently released video of the suspect (below) said to be taken at the scene, which seems to show him hiding.

According to the criminal complaint filed by the D.A., Officer Rafael Perez, from the Sixth Precinct Detective Squad, said that “via surveillance video and police body worn camera,” he observed a man throw a brick at police Lieutenant Joseph Cuervo during a protest, hitting him in the head.

Perez said Cuervo reported suffering “substantial pain to his head and lacerations to his hands.”

“Via surveillance video,” Perez’s statement continues, “I was able to track the individual who threw the brick from the scene and ultimately observed him enter a Lyft vehicle at the intersection of Waverly Place and MacDougal Street at approximately 10:55 PM. I am informed by Lyft that the person picked up at that location at that time was Christopher Cabrera with a telephone number of ___-___-_____. I am informed by Facebook that the telephone number ___-___-____ is associated with an account bearing the username _______ and the display name Christopher Cabrera. I have reviewed publicly available photos from the Facebook account of _______ and recognize the individual depicted in those photos to be [the] defendant.”

As can be seen, the complaint redacts the defendant’s alleged phone number and Facebook username.

The Village Sun has requested surveillance video that actually shows the suspect allegedly throwing the brick and/or the officer being struck by it, but so far both the police press department and the D.A. have not supplied any. According to a source, further videos and photos would only be released when they are presented as evidence at trial.