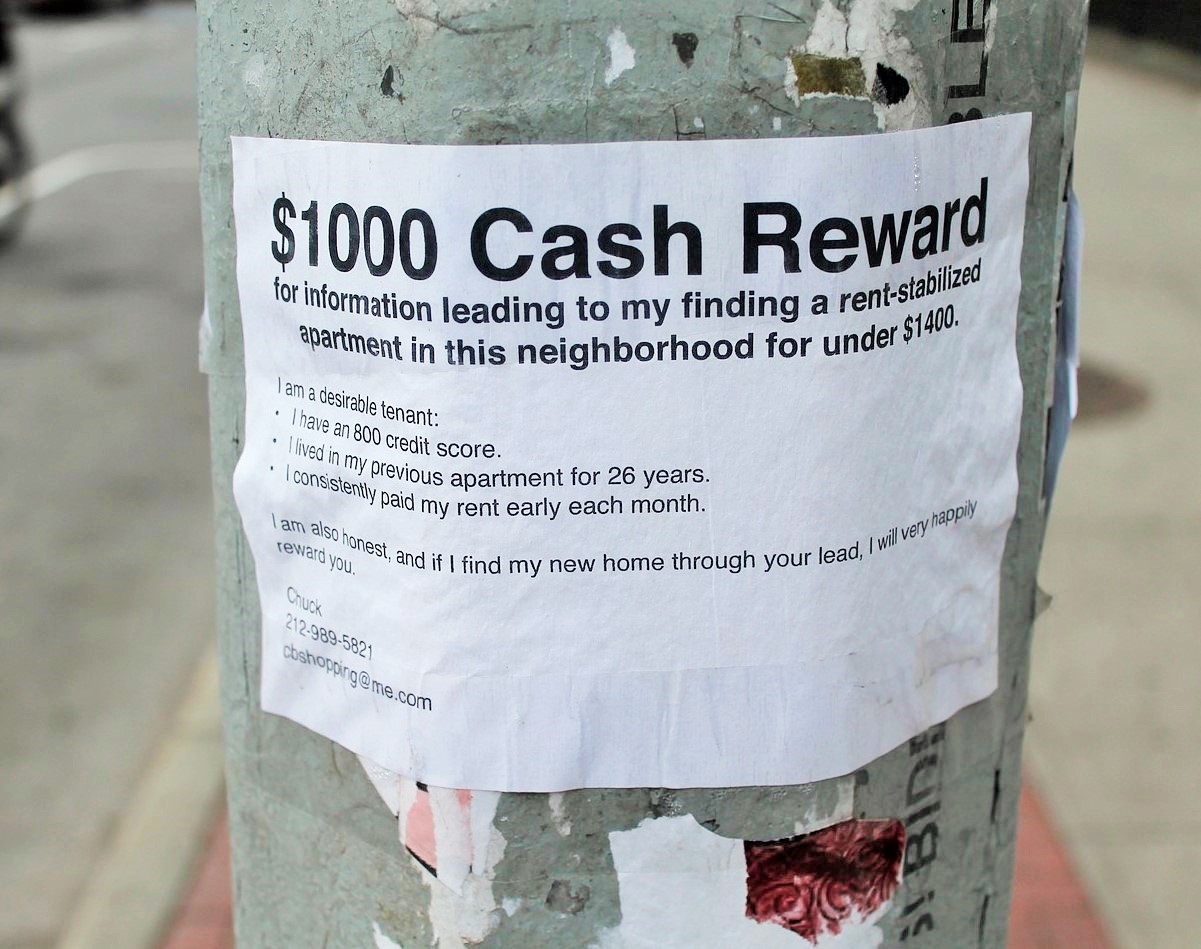 A search by Chuck, a professional drummer, for an affordable apartment in the Village has not been rewarded — despite offering a reward for leads. (Photo by The Village Sun)

Even amid pandemic, musician can’t drum up a cheap, rent-regulated place

BY AIDAN SEIDEN | While it seems New York City apartments are cheaper than ever right now, there are still many New Yorkers struggling to find a place to live as they navigate the murky waters of the post-pandemic real estate market.

One particular longtime Manhattan resident who found himself in this predicament is Chuck, a man who refers to New York City as his “favorite place in the world.” Chuck, who requested that his last name not be published, is a drummer and writer/editor who is in his 60s. He had lived in his apartment in the West Village for 26 years. However, he was one of many people who, as he put it, “foolishly fled New York City during the lockdown,” giving up his hard-to-find rent-stabilized apartment.

Following Governor Cuomo’s lockdown of the city last March, many New Yorkers expected the Big Apple was going to be so severely affected by the pandemic that it would never recover. As a result, many denizens high-tailed it to nearby areas, such as New Jersey or Long Island, while others sought reprieve even farther in places like south Florida, as Chuck did.

Yet, just a couple of months later, Cuomo initiated phase one of the city’s reopening, allowing retail stores to provide curbside pickup or delivery on orders placed in advance, and also allowing wholesalers, manufacturing and nonessential companies to reopen.

This was exciting news for Chuck since he quickly realized, after spending only a few months in Florida, that he found it hard to adjust to the drastic culture change.

However, to his dismay, finding a new rent-stabilized place was far harder than he previously had understood.

Not helping things, landlords have reportedly kept “more than 50 percent” of vacant rent-stabilized residences in Manhattan off the market, according to a CNBC article. That warehousing of affordable units, though, was going on pre-pandemic, a  response by landlords to Albany’s two years ago having eliminated vacancy decontrol for stabilized units.

Meanwhile, tenants fortunate to have a rent-regulated unit are usually loath to leave it, considering what a great deal it is.

As a CNBC report stated, “The same person living in that [rent-stabilized] apartment 20 or so years later will be paying around 45% below the market-rate rent, on average.”

As a result, even now it’s still hard to find a rent-stabilized unit in Downtown Manhattan, Chuck said.

The ongoing pandemic is making the hunt even more challenging, as well, due to the current moratoriums on evictions and other factors.

“Landlords can’t evict tenants during COVID-19 until the fall, so I think a lot of tenants aren’t paying their rent,” he said. “So for the apartments that the landlords are willing to rent, they have a condition that didn’t exist years ago, which is that the prospective tenant has to show that they are currently employed, and currently earning 40 times the [monthly] rent in their annual salary. If you can’t show that, you can’t get in the door.”

Since a large number of Americans lost their jobs during COVID-19, this presents a significant obstacle for those looking to rent an apartment. According to The City, “The [number of] jobs lost in New York City in 2020 [was] 631,000, the largest one-year decline since reliable statistics began being compiled after World War II.”

Undeterred, Chuck arrived at the idea of posting fliers around the West Village offering a $1,000 reward for any information or leads on stabilized apartments in the neighborhood for under $1,400 a month. Unfortunately, this effort has not panned out.

Even though there are pending lawsuits that could reach the U.S. Supreme Court and put warehoused rent-stabilized apartments back on the market, Chuck, like others in a similar bind, is facing a tough choice.

“Looks like I am going to have to find a new city,” he said.