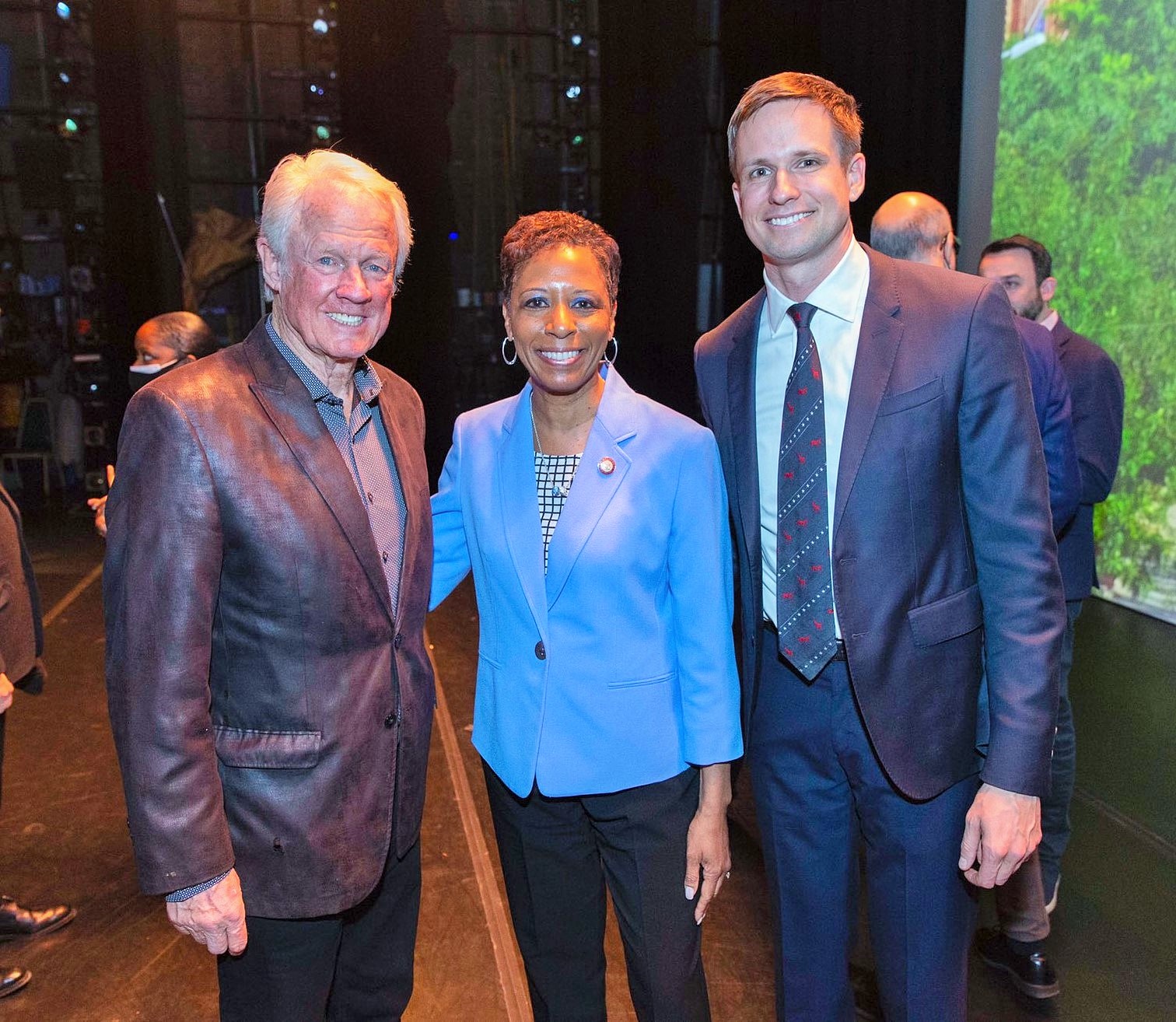 He was officially sworn into office by Trump scourge Letitia James, the state attorney general.

Before the program started, Bottcher stood outside on the sidewalk warmly greeting everyone as they filed into the theater, which for this day sported his name on the marquee.

The original plan had been to hold the event at The Hub performance center in Hudson Yards, but the Omicron variant caused a delay and a rescheduling.

It was a typical inauguration, in the sense that Bottcher was praised with glowing accolades by a stream of fellow Democratic politicians. Making this one a bit different, though, was that Bottcher’s personal story was front and center — about overcoming bullying and prejudice in a small Adirondack town and finding his calling for public service in New York City.

It was also a fun inauguration, with an entertaining speech by Bottcher’s dad — showing where the young politician gets his charm — as well as a stage-filled, singing finale to rival a Super Bowl halftime show.

As the masked-up audience settled into their seats, Kiss’s upbeat “Back in the New York Groove” blared from the sound system as Bottcher clapped along. Things then kicked off, literally, with a performance by Dances for a Variable Population, a multigenerational dance company with a focus on older adults. They danced to the Pet Shop Boys’ cover of the Village People’s 1979 hit “Go West” — fitting since Bottcher’s district covers the West Side, including Greenwich Village, Chelsea and Hell’s Kitchen. About midway through, Bottcher jumped up from his seat and joined the dancers.

Next, Darlene Waters and Miguel Acevedo, the respective presidents of the Chelsea-Elliott Houses and Fulton Houses tenant associations, sung Bottcher’s praises. As the chief of staff of former Council Speaker Corey Johnson, who previously represented the district, Bottcher built strong relationships with the community leaders.

“Erik is very special to me,” Waters said. “He is a familiar presence in our tenant association office…distributing food, PPE.”

As The Village Sun first reported, Bottcher recently told a meeting of the Greenwich Village – Chelsea Chamber of Commerce that his mother, Linda, was actually worried about coming to the inauguration after seeing news reports of violent assaults in New York City. However, his parents made it down for the event. Waters told his mother not to fret.

Folks are asking me if Mom had a good experience in NYC this weekend, so I asked her to tell us herself! Love you Mom and love you NYC! ❤️ pic.twitter.com/D0s2rMt5rc

Acevedo noted how Bottcher, during the pandemic, had brought critically needed supplies, like drinks, baby food and PPE, to Fulton Houses residents.

“If not for Erik…many of our seniors may have passed,” he said. “He never forgets us, so we’re not giving him back until eight years from now.”

Among community leaders in the audience were Jeannine Kiely, the chairperson of Community Board 2, along with two previous chairpersons, Carter Booth and David Gruber, plus Jeffrey LeFrancois, the new chairperson of C.B. 4.

Lieutenant Governor Benjamin praised Bottcher’s “bravery” for speaking out publicly about dealing with his own mental-health issues as a teenager after being bullied for being gay. Benjamin ended with a cutting remark about Bottcher’s predecessors in District 3, telling the audience, “I know you know the history of this City Council seat and what happens to people in this City Council seat. Just give Erik a chance.”

Also speaking, Jerry Bottcher, the councilmember’s dad, started out by observing, “This room is about one-third the size” of the town where his son grew up.

Wilmington, N.Y., with a population of around 1,200, is where the Bottchers’ family business, the Hungry Trout Resort, catering to fly-fishers, hikers and kayakers, is located.

Showing a cute sense of humor, Jerry noted how Erik had told him only the night before that he wanted to say something at the inauguration.

“Thanks for the lead time on that,” he deadpanned, “slept like a baby last night.”

He recalled benchmark dates in his son’s life: the day he was born, his first birthday, “first day on skis, first night as a dishwasher in our new restaurant…and now, here — you are no longer a boy.”

At the same time, Jerry Bottcher also remembered “difficulty in high school, ugly taunts and insults. Fortunately, you didn’t tell your parents about that because I probably would have strangled the bastards,” he said. “And now those dirty, little bastards have grown up and they come up and stop me on the street and they apologize.

“You won, Erik,” his father said, poignantly. “You won. Through every one of your trials, you came out stronger and wiser and more humble.”

Jerry Bottcher assured the crowd that his son is up to the job.

“You won’t be disappointed,” he said. “This is the promise of a very proud father.”

Next to speak was Schumer, admitting Bottcher’s dad was “a tough act to follow.” The pol put in a personal plug for The Hungry Trout, noting he had had a great meal there.

The Senate majority leader said Bottcher’s narrative actually is not unique, in that the Big Apple has always welcomed those who might not be valued where they came from, yet have so much to offer.

“People come to New York,” he said. “We are a wonderful, diverse, empowering city. Other places might not know their worth.

“He loves this community,” Schumer said of Bottcher. “And he will do such good in this Council district — you ain’t seen nothing yet.”

Turning to national politics, the D.C. power broker recalled how Benjamin Franklin feared for the fragility of America’s fledgling democracy. The Founding Father worried if people would participate in elections, as well as about the potentially selfish, egotistical motivations of those seeking office.

But seeing Bottcher and the crowd in the theater — including activists, nonprofit members and community leaders — gave reassurance, Schumer said.

“Who have we put forward for office?” he asked. “Not a scoundrel. One of our very best. If Ben Franklin were looking down on our auditorium today, he would smile. This is the democracy he wanted.”

Congressmember Maloney praised Bottcher as “eminently prepared” from having been Johnson’s chief of staff.

“I was on the City Council,” she noted. “It’s a very, very important job. Many of the problems — whether it’s the coronavirus or the homeless crisis — it seems to happen first in New York, and the whole country watches it.”

Comptroller Lander, noting he has joined Bottcher at press conferences on sanitation-related issues, said, “Garbage really might be the issue that unites New Yorkers. This is a service everyone agrees needs to be provided.”

Bottcher’s parents then joined him on stage as Bottcher was officially sworn into office by A.G. James. As she walked up to do the honors, the crowd gave James, who is investigating Donald Trump’s finances, a rousing round of applause.

James hailed Bottcher as “a star.”

In his own remarks, the new councilmember thanked his dad for telling him, when he was around 14, that he would love him unconditionally.

“You were teaching me that I was perfectly fine the way I was, although it would take me several years to realize that for myself,” he said. “You were also telling me how to treat others. How to lead with love and kindness.”

Bottcher then told of how, after graduating from George Washington University, he came straight to New York City.

“Twenty-one years I moved to New York City without a job lined up, an apartment lined up or any plan at all,” he said. “I just knew that I wanted to be here, like countless others over the generations. I rented a futon in some guy’s living room in Hell’s Kitchen off of Craigslist for $450 a month. If you had told me then that I one day would be representing that neighborhood in the New York City Council, I would have never believed you.”

In his 20s, he said, he realized “our lives go by quickly” and that he wanted to commit to a life of public service “to leave the world better than we found it.”

Confronting the city’s mental health emergency is one of Bottcher’s top issues.

“We’ve got to address the crisis of serious mental illness in our city,” he reiterated. “You don’t have to walk far in our neighborhood or any neighborhood around the city, to see people suffering from untreated serious mental illness. We have failed so badly on this issue, as a country, as a state and as a city, to the point where the biggest provider of mental health in the United States is prison and jails. We should all be ashamed of that, that’s wrong.”

He shared that as a teenager he spent a month in a mental health hospital, noting of the treatment he received there, “It saved my life.”

Yet, he said, “Sadly, that is the treatment that so few people in this country have access to, particularly if you’re poor or a person of color.”

Steps like reversing the closure of inpatient psychiatric beds and “expanding the community clubhouse model” are sorely needed, he said.

Bottcher also said more must be done to address the district’s inequities.

Citing one of his top campaign planks, he gave an update on his idea of creating a West Side Employment Network that will sport a “jobs bank” of local jobs and a “résumé bank” for residents who are ready, willing and able to work. Over the last two months, he has been meeting and coordinating with local companies and organizations, like Google, the High Line, Pfizer, Hudson Guild and Greenwich House, and the program could launch as soon as this summer, he said.

The initiative’s goal, he said, is that, “Everyone in our district who wants a job can get a job,” adding, “That’s how you change lives.”

“We’ve got to address the sanitation crisis in New York City!” he stressed, hammering on another of his top issues. “In my 21 years here, I’ve never seen it dirtier. And this is about more than just aesthetics: It’s an environmental issue, a public health issue, an economic development issue,” he said, noting that overflowing trash baskets do not help attract foot traffic.

However, while Bottcher is lobbying for Department of Sanitation funding to be restored to pre-COVID levels, Mayor Adams recently proposed slashing it even further.

“I’m not O.K. with that,” he declared of Adams’s proposed cuts, as the audience booed in agreement.

The event ended on a feel-good note, literally, as Bottcher, strumming  a black guitar, was joined by campaign volunteers the Bluestone twins and drag performer Ruby Rims in belting out a rousing version of “New York, New York.”

Bottcher invited everyone to the Chelsea Bell, at 26th Street and Eighth Avenue, aferward for a beer and to continue the celebration.