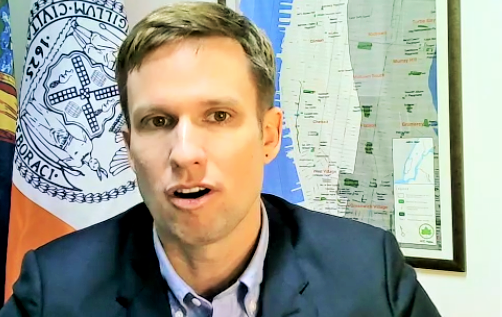 Erik Bottcher said he and fellow Councilmembers Christopher Marte and Gale Brewer are trying to have input on the law that is currently being drafted in the City Council to oversee a permanent Open Restaurants program.

Bottcher: Lack of enforcement on dining sheds has ‘undermined confidence’ in sprawling program

BY LINCOLN ANDERSON| Open Restaurants dining sheds have been getting a pass, according to Councilmember Erik Bottcher. Not a dining pass — but a free ride from any real enforcement.

At a town hall meeting with Bottcher on Tuesday hosted by the Greenwich Village – Chelsea Chamber of Commerce, the councilmember said that, during the pandemic, City Hall has intentionally gone easy on local businesses by not slapping them with fines.

He said that, over all, the city has reined in enforcement against small businesses during the health crisis, in order not to make things any more difficult for them during trying times.

“The city waived a lot of those fines,” he said.

So, instead of penalizing a business for the first offense, inspectors now issue a warning, allowing — at least, theoretically — the merchant to correct the mistake.

So, the laissez-faire approach on Open Restaurants is just a continuation of that larger policy, as he explained it.

Bottcher’s comments jibe with figures reported by the Department of Transportation at a hearing on making Open Restaurants permanent held earlier this month by the City Council’s Committee on Consumer and Worker Protection. D.O.T. said it had issued a total of just 22 fines for violations concerning the sheds — though had given out nearly 200 times as many, or 4,300, warnings. The agency reported that it also had removed 40 abandonned sheds from the streets. Meanwhile, more than 12,000 bars and restaurants across the city are participating in the program.

While the emergency outdoor dining program helped save hospitality industry jobs during the pandemic, Bottcher noted “the flip side” is that areas with “a high concentration” of both bars and residents, like Greenwich Village in his District 3, have experienced negative impacts from the structures.

“I don’t know if we want to call them sheds,” he said.

As Bottcher explained, a year and a half ago, the outgoing Mayor de Blasio and City Council leadership decided to make the roadway dining program permanent. The actual details, though, of how the permanent program would work were left up to the new City Council and Mayor Eric Adams.

“Whenever you talk about public space, it’s one of the most controversial issues… . In a city of 8.5 million people,” Bottcher reflected, “the streets — should they be [used for] restaurants, parking, gardens, playgrounds or just empty curbs for access?”

The roadway huts scheme has been a hit in parts of the city that previously lacked outdoor dining, such as much of the outer boroughs; but in parts of the Village it’s simply too much for streets to bear, he said.

“Sullivan and Thompson and MacDougal, you’ve got just one long shed running the length of the block,” he noted. “You can’t see the storefronts. You can’t access the curb.”

The lack of enforcement, intended to help the eateries and pubs, has backfired by alienating residents and turning them against the program, Bottcher said.

“The city has laid out the rules but hasn’t done enforcement — like with small businesses, [just] giving warnings,” he explained. “What it’s done is undermine the confidence of people that there’s ever going be any enforcement.”

Meanwhile, the councilmember said his hope for Open Restaurants is “to keep the best of it and get rid of the most problematic parts.”

To that end, he said that he, Christopher Marte — who with Bottcher co-chairs the City Council’s Manhattan Delegation — and Councilmember Gale Brewer want to have input in crafting the law for permanent Open Restaurants, which is being worked on now. Normally, though, Bottcher said, bills are drawn up by the City Council speaker and the bill sponsor, in this case, Marjorie Velazquez, the chairperson of the Committee on Consumer and Worker Protection.

“We want to be involved,” he said.

In response to a question about how other types of business can also take advantage of outside space, Bottcher noted that the city had pitched a program called Open Storefronts that allows merchants to put their wares on the sidewalk and in the street, if it’s a so-called Open Street that is blocked off to car traffic.

“For some reason, that didn’t really take off,” Bottcher noted, though adding he wants to “revisit” it.

With e-commerce making such inroads into retail, it’s important to help brick-and-mortar stores, in the politician’s view.

“Asking a 21-year-old to go to a store and buy something — that’s really becoming a foreign concept to some people,” he noted. “We can’t focus exclusively on the hospitality industry,” he added. “A neighborhood can’t be hospitality only. We need goods and services and a healthy mix of retail offerings.”

Maria Diaz, the G.V.C.C.C. executive director, who emceed the town hall and posed chamber members’ questions to Bottcher, noted that Open Storefronts was challenging for merchants because putting a rack of dresses or a bunch of hammers out on the street requires staffing and security.

“We need ways that are actually viable,” she stressed.

Segueing from that into the issue of crime, which affects both customer foot traffic and store safety, Diaz noted that both robbery and felony assault are up 33 percent while grand larceny, as she put it, is up a “whopping” 52 percent.

Bottcher confided that his mother sadly is afraid to come to New York City for his inauguration on Sat., March 5, for fear of violent crime.

Bottcher then directly segued into a discussion on dealing with the mental health crisis.

“You don’t have to look far on our streets to see people with untreated mental illness,” he noted. He recalled how Michelle Go, 40, was fatally pushed in front of a subway train in January at Times Square, which is in Bottcher’s district, by a mentally ill man.

“We can’t come at it with only a criminal justice lens, a punitive lens,” he stressed.

Referencing an idea from his 8-point mental health plan, Bottcher noted he supports reinvesting in inpatient psychiatric beds, hundreds of which have been decommissioned in New York City in recent decades. However, he added that inpatient behavioral health beds are expensive, noting that part of the current challenge is precisely the lack of funding.

The current situation, though, clearly is not working, Bottcher acknowledged.

“Larger mental health hospitals were horrible,” he said, though adding that their replacement, “the shift to community-based outpatient mental health,” needs better oversight to be effective. Basically, he said, jails have become a substitute for proper mental health treatment, with people ping-ponging back and forth between jail and the streets.

“Decarceration is a good thing,” Bottcher said, though adding that “putting people on the street with untreated mental illness [is not].”

In terms of another way to help small merchants, Bottcher said, “We need to stop jacking up property taxes. The city needs to cool it with the property tax increases.”

At the same time, he said, not enough merchants are keeping things clean in front of their premises. That means cleaning the sidewalk all the way to the curb, plus 18 inches out into the street.

“It is contributing to what we’re seeing in the city — the sanitation problem,” he said. Noting that sanitation is one of his top issues and something that he campaigned on, he said. “To me, sanitation is more than just a systemic issue. It’s a business issue. If there’s piles of trash on the street… . People are in a decision-making mode: ‘Should we stay in New York City or should we go?’ Every overflowing corner basket really hurts us.”

Worsening the trash problem, as he has previously pointed out, daily Department of Sanitation garbage truck routes in Manhattan have plunged from their pre-pandemic number of 700. After COVID hit, garbage truck trips were slashed to 200, which “made some sense,” Bottcher conceded, since there weren’t as many people outside and people were working from home. In 2021, though, the borough’s number of garbage truck sorties rose to only 400 daily, which is not enough, in his view.

“Council District 3 gets tourists, lots of foot traffic, particularly on weekends,” he said, which leads to “overflowing baskets.”

Not surprisingly, then, Bottcher is not happy that, in his proposed budget, Mayor Adams is actually cutting $34.2 million from street cleaning and trash collection, as well as suspending the expansion of the Curbside Composting program.

The councilmember said, despite some residents’ concerns, leaving compost on the curb for pickup “doesn’t add to rats” since, instead of garbage bags, the city provides special plastic containers to be used for the food scraps.

The city’s budget won’t be passed until June. Until then, Bottcher said, the push will be on to restore funding for sanitation services, noting, “We really will be fighting [for it].”

Bottcher started out and also finished his talk on an optimistic note, by expressing confidence that the city will bounce back from the pandemic better than ever. But he admitted that what he called the health crisis’ “stop-start” nature, with new variants regularly popping up, has been frustrating.

“We’re not out of the woods yet,” he said. “It’s going to be a rocky road. … But I feel once we get past the coronavirus, once we get through this ‘stop-start,’ we can experience the best decade in the history of New York. But our government has to make the right decisions.”

Marni Halasa, a District 3 activist who ran for City Council against Bottcher last year, submitted a question asking where the councilmember stands on passage of the long-stalled Small Business Jobs Survival Act a.k.a. Jobs Survival Act. To her chagrin, however, the question was not mentioned during the town hall. The act would increase merchants’ ability, when their leases expire, to negotiate renewal leases at terms they could afford.

Speaking afterward, Halasa said, “I appreciate Erik holding this town hall. But, with the exception of lowering property taxes, his presentation was primarily quality of life issues. I’m not saying that quality of life isn’t important, it is. But if you truly want to help small businesses thrive long term — give them the S.B.J.S.A.’s right to renew and an affordable lease for 10 years. That’s a true economic lifeline, which will keep small businesses in their spaces  — something that all of us want for our neighborhoods to help our city recover.”