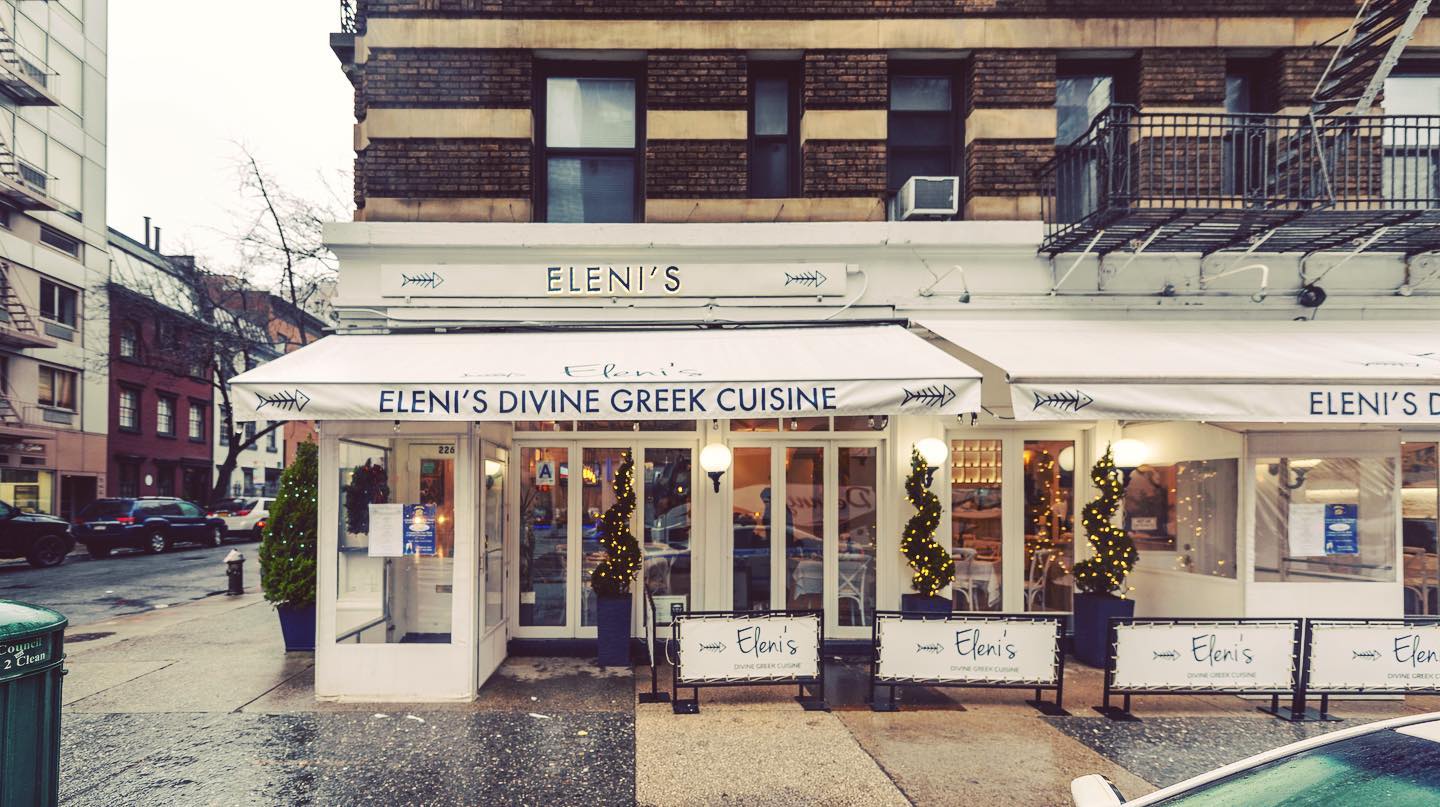 BY MARY REINHOLZ | Restaurateur Eleni Vareli, who reportedly helped sign up celebrity chef Emeril Lagasse for consulting at Rodos — a trendy Greek eatery that the famed chef opened and abruptly walked away from last year at Hotel Henri in Chelsea — is the proprietor of a new Hellenic eatery in Gramercy.

Called Eleni’s for short, but sporting the name Eleni’s Divine Greek Cuisine over its front door at 226 Third Ave. at E. 19th St., it’s been touted on Yelp for its classy Mediterranean decor and succulent dishes.

Some are from the sea, with names like Htenia, Octopodi Sharas and Calamarakia, which are all Greek to me. These dishes were also staples at a predecessor restaurant. (More on that as we go along.)

When I stopped by Eleni’s last Friday, Vareli, a woman of few words, said that the establishment was actually her “first restaurant.”

At night, the place gets lit up like a Christmas Eve party and so do the potted firs on the street. The place opened early this year, said Valeri’s adult daughter Gigi. She posed earlier for photos with her mom at the cash register that fronted a well-stocked  bar. Gigi said they were from Athens but declined to give their ages or how long they have been in New York.

The space was previously occupied by Sal Anthony’s, an Italian family restaurant operated by beloved Gramercy businessman Anthony Macagnone. A former longshoreman, he died Jan. 23, 2019 of esophageal cancer at age 79.

Since Easter 2017, Macagnone had helmed Sal Anthony’s, which he resurrected from his flagship eatery on Irving Place after being forced out of there in 2006 by a rent hike. Several other of his restaurants, including Lanza’s in the East Village, and Sal Anthony’s SPQR in Little Italy, closed before his passing, said one of Macagnone’s former employees who now works at Eleni’s as a bartender.

His eldest son, Anthony Macagnone, Jr., said he decided to sell the Third Ave. restaurant space “to a Greek family” for $100,000 in order to focus on Sal Anthony’s Pilates salons — one down the block on Third Ave. near E. 17th St. and another on Union Square East. He said his family approved of Vareli for the restaurant space “because she seemed to have a good background.”

Macagnone acknowledged that Vareli had retained several of his father’s dishes on her menu. One of her entrees has been designated, “Sal Anthony’s Pasta.” It consists of “whole lobster tail braised in tomato and assyrtiko wine broth, herbs and a light cream sauce over linguine,” states Eleni’s menu . Price: $30.

It’s not clear how long Vareli knew the late Anthony Macagnone. His menu, still online, includes two dishes with her name on them: Eleni’s Chips — organic zucchini eggplant chips served with tzatziki —and Eleni’s Norwegian salmon. Both are also on her printed menu.

Last Friday, Vareli said she designed the menu for her new restaurant and claimed that some of the Greek foods on it had been prepared by her mother “and grandmother.”

When asked about her Eleni’s Chips appearing on Sal Anthony’s menu, she offered no explanation. When we first met shortly before Valentine’s Day, Vareli said she had been a customer at Sal Anthony’s restaurant.

“I had eaten here before and I loved the neighborhood,” she said.

The Village’s Sun efforts to clarify Valeri’s dealings and transactions with the late Anthony Macagnone’s widow Cynthia Graham were unavailing.

A LinkedIn profile of Eleni Valeri describes her as a former chief operating officer at the Technical University of Crete.

“I studied [product] engineering and art,” she said.

During an early visit to Eleni’s, her daughter Gigi said Vareli “didn’t want to talk about Rodos,” the aforementioned restaurant in Chelsea that closed after celebrity chef Lagasse terminated his consulting agreement with the place.

She said her mother was “very private and kind of shy.”

Vareli, however, later confirmed that her partner in the Rodos venture was Yiannis Chatiris, who operates Mykonos Bleu, a Greek restaurant and also a rooftop lounge, both at the Hayden Hotel, at 127 W. 28th St. She said Chatiris is not involved in her elegantly designed Gramercy restaurant and admitted it cost her a fortune to renovate.

Food arrives quickly for eaters in Eleni’s two dining areas. Moments after I sat down at a small table covered with immaculate linens, a hesitant waiter served me my order of dolmadakia — grape leaves stuffed with rice, walnuts, pine nuts, raisins and extra-virgin olive oil, which I learned later was also on Sal Anthony’s menu. The complementary basket of toasted pita bread and humus apparently was not. (Price: $15).

“It’s a little pricey,” said one of my Gramercy neighbors shortly before I arrived at Eleni’s for this snack. “But everything is fresh and the tomatoes are bright red!” she exclaimed.