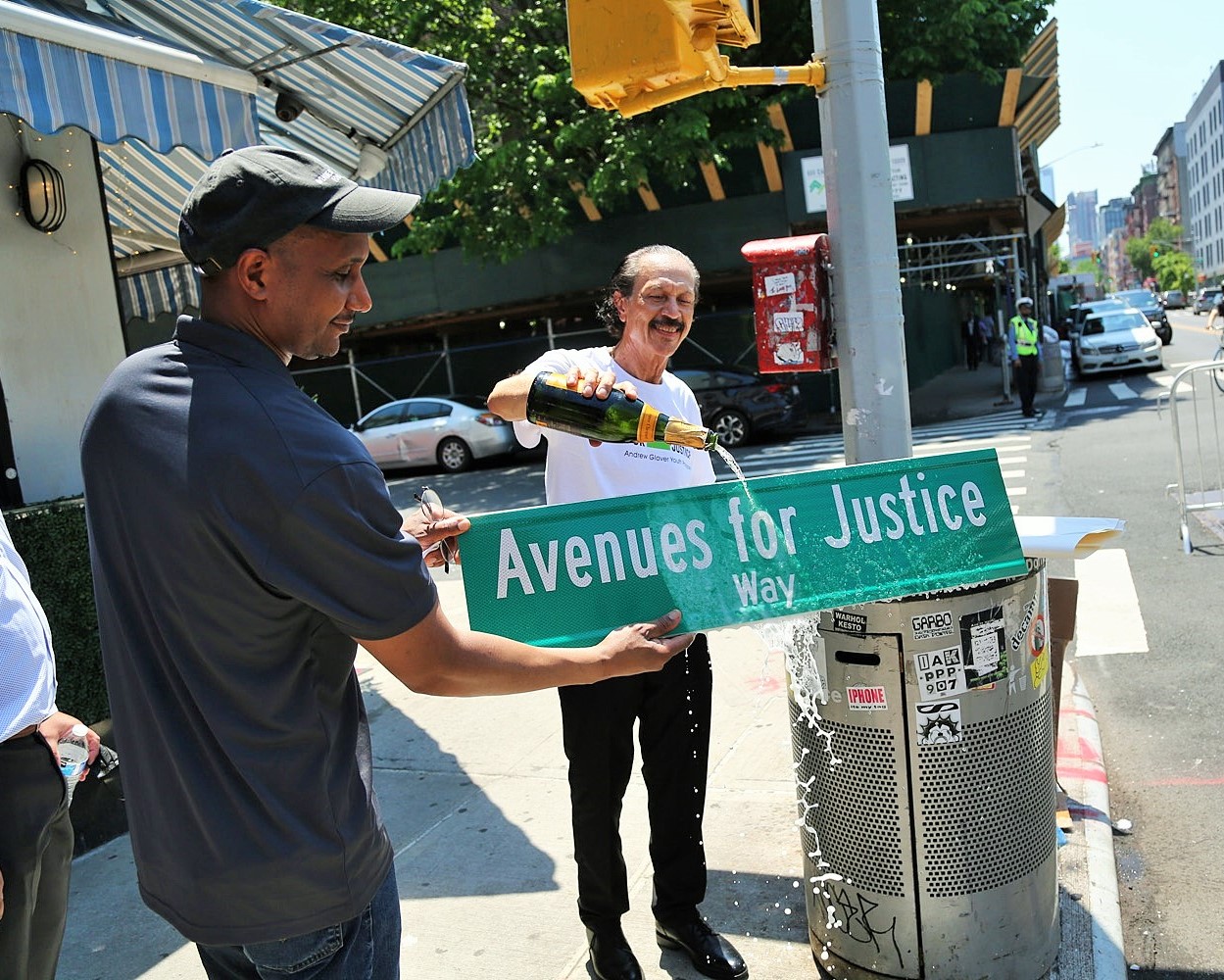 Angel Rodriguez, co-founder of Avenues for Justice, doused a keepsake version of the co-naming street sign in champagne at the ceremony. (Photo by © Jefferson Siegel)

BY JEFFERSON SIEGEL | Spend any time in the Criminal Court building in Lower Manhattan and you’ve probably seen Angel Rodriguez moving through the halls, from courtroom to courtroom, buttonholing prosecutors, lawyers, police and even judges.

Rodriguez is the executive director and co-founder of Avenues for Justice. Started in 1979 with co-founder Robert Siegal, who died a short time later, AFJ is an organization that provides an alternative to jail for youthful offenders.

For more than 40 years Rodriguez and AFJ have diverted countless young people away from jail and into  programs so that, instead of sitting in a prison cell, they get a second chance at a productive life in society.

On Saturday afternoon, local politicians, criminal justice advocates and even Manhattan District Attorney Alvin Bragg stood under a broiling sun to honor Rodriguez’s efforts by co-naming a street in his honor.

“We know about the choices we made when we were young,” Bragg said, commending the second chances AFJ offers young scofflaws.

As she stood in front of the AFJ building on Avenue B at Sixth Street in the East Village, City Council member Carlina Rivera called AFJ, “a model for the rest of the city.”

Gene Porcaro, the former chief of the city’s Department of Investigations, was effusive in his praise.

“Angel is a saint,” Porcaro said. “He has gone through tough times when no one listened to him. He was a beacon for these kids.”

After Rodriguez had poured champagne on a ceremonial street sign, the plaudits continued.

“The Manhattan District Attorney’s Office is honored to be here,” Bragg declared. “I grew up in Harlem during the ’80s. Growing up, a lot of people became justice-involved,” he said of the challenges facing the youth of his neighborhood.

Standing in the doorway of the AFJ building, taking it all in, Rodriguez was both proud and humbled.

“Today is a great day to validate the work I’ve been doing on the Lower East Side for four decades,” he said, “providing advocacy for young people, getting young people back on track.”