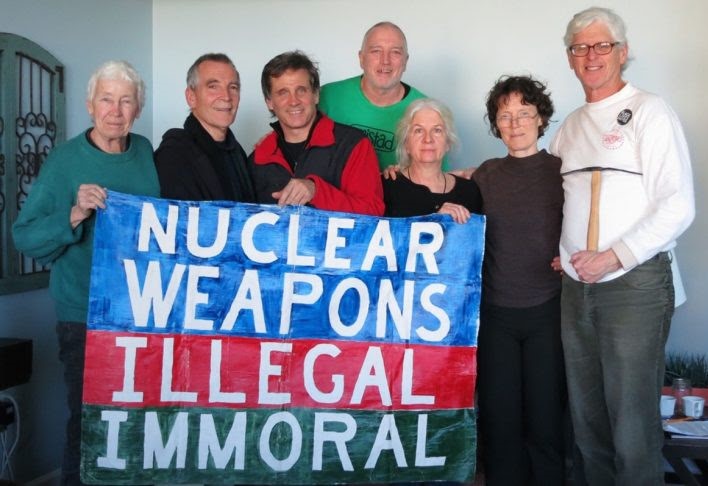 Carmen Trotta, third from left, with the rest of the Plowshares 7, including Martha Hennessy, Dorothy Day's granddaughter, to the right of Trotta. (Courtesy Plowshares 7)

BY MARY REINHOLZ | East Village pacifist Carmen Trotta left a low-security prison camp at the Upstate Otisville federal correctional facility on early release from his 14-month sentence late in May. One of his fellow inmates at the supposedly cushy joint for white-collar offenders was Michael Cohen, Donald Trump’s personal lawyer and fixer.

Trotta, a Catholic Worker who for years has led numerous anti-war demonstrations with no money of his own, was clearly a different kind of inmate than Cohen, whom he never met during his six months at Otisville. He got there after his 2019 conviction for joining six elderly Catholic peaceniks in a death-defying break-in at the Kings Bay naval base in Georgia, where they conducted a symbolic disarmament of Trident nuclear weapons more than three years ago.

Trotta, 59, escaped COVID-19 during his six months in the slammer even while the disease ravished other parts of the U.S. prison system.

“There was no COVID at my camp,” he said during a recent interview not far from the Catholic Worker St. Joseph’s House of Hospitality, at 36 E. First St., his home base for more than 30 years. In a cruel irony, the five-story graffiti-splashed walk-up, a vestige of the deep past in his rapidly gentrifying neighborhood, was hit with a COVID outbreak shortly after Trotta arrived around Thanksgiving.

Figures are inexact but a knowledgeable Catholic source in Lower Manhattan said eight people were infected, with three hospitalized and five sent by the city to hotels for quarantining.

“Everybody has to wear masks,” Trotta said when asked about safety precautions for visitors who come to St. Joe’s for free food and what Dorothy Day, the Catholic Worker movement’s co-founder, called “acts of mercy” for the downtrodden.

Nobody, however, has to present proof of vaccination to enter the brick building, established by Dorothy Day in 1936. Day, a bohemian left-wing writer, became a Christian anarchist and is now being considered for sainthood by the Catholic Church.

Trotta, who practices voluntary poverty and seems committed to Day’s mission, said many people now showing up at St. Joe’s just want to “use the bathroom because they’re afraid of being arrested” for relieving themselves on the streets.

Wiry and movie-star handsome, the activist, who once played football at Grinnell College in Iowa, quickly blocked this reporter from photographing a man seeking entry to St. Joe’s last week.

“What are you doing?!” he exclaimed. “You’ve got to get his permission first!”

He acknowledged earlier that there had been COVID cases at the Catholic Worker’s Maryhouse, at 55 E. Third St., where Dorothy Day spent her last years.

“It wasn’t really an outbreak,” said Jane Sammon, 75, who has lived at Maryhouse as a Catholic Worker volunteer for 30 years and was a friend of  Dorothy Day. “We had one case last year and the woman was hospitalized for one day. A man came from St. Joe’s to quarantine. We have one room for quarantining, which contains a bathroom and sink. We’re larger than St. Joe’s.”

There were apparently a couple of other cases involving people who have visited Maryhouse over the years.

Like Trotta, Sammon is an associate editor at the Catholic Worker newspaper. She believes it’s unlikely that Dorothy Day would support the property damage in the Georgia anti-nuke protest carried out by Catholic Worker activists, who cut through a fence to get inside the sprawling 17.000-acre installation. They poured baby bottles of human blood at the administration building, hammered a Tomahawk missile display and spray-painted biblical messages, like “Love One Another,” before they were discovered, detained and transported to the Camden County Jail.

Known as the Kings Bay Plowshares 7, the aging militants included Dorothy Day’s granddaughter Martha Hennessy, 66, and Jesuit priest Steve Kelly, 72. All of the seven were convicted for three felonies, including conspiracy and destruction of government property, plus one misdemeanor for trespass. All  have since been released from prison.

Sammon noted that Plowshares is “separate” from the Catholic Worker movement and was founded  the same year, 1980, that Dorothy Day died.

“She did not even know her own granddaughter in that capacity,” she said. “But she had enormous respect for many people in Plowshares who were involved in precursor protests — against the draft and the Vietnam War — and she always had great affection for the Berrigan brothers.”

Sammon was referring to Daniel Berrigan, a famed Jesuit priest, and his brother Philip Berrigan, co-founders of Plowshares, who took the name of their movement from Isaiah’s biblical prophecy predicting that nations “shall turn their swords into plowshares.”

Bill Ofenloch, a writer and spokesperson for the Kings Bay Plowshares 7, said Trotta, the group’s youngest member, risked death when he and two over-the-hill comrades cut through electric-wire fencing and entered a “lethal force zone,” getting close to underground bunkers that they believed contained Trident nuclear weapons for use in the base’s Ohio-class submarines.

“The [prosecutors] accused them of risking their own lives and claimed they deserved a heavier penalty because Marines on the base are trained to shoot to kill [intruders]” in the restricted area, said Ofenloch, who attended the court hearings in Georgia.

Ofenloch, however, said that no one in the Plowshares movement has been shot over the years, “but there is always a risk. It’s a big commitment but [activists] are willing to take it.”

For his part, Trotta, who’s been busted numerous times on misdemeanor charges in anti-war protests, doesn’t appear to have second thoughts about engaging in his first Plowshares action on April 4, 2018 (chosen because it was the 50th anniversary of Martin Luther King’s assassination). Asked if the jail time, the inconvenience and getting his first felony arrest were worth it, Trotta didn’t hesitate.

“It was the right thing to do,” he said firmly.

He handed The Village Sun a copy of his statement to the U.S. District Court in Brunswick, GA., after his 2019 indictment. In it, he denounced the “continued existence of nuclear weapons on American soil as a violation of international humanitarian and human rights law, a violation of current treaty obligations and, first and foremost, as a latent crime against God and humanity.”

Kings Bay has neither confirmed nor denied the presence of nuclear weapons on the base.

Like his co-defendants, who all entered not-guilty pleas, Trotta’s legal battles haven’t ended. He said that “both Georgia and New York State want my father’s inheritance” to pay for damage incurred by him and his comrades.

Trotta had been a caretaker for his widowed dad, who lived on Long Island and died at 93. He said his father left him “a check,” which he believes the government entities will seek for restitution.

The total amount of restitution demanded by the government for the Kings Bay protest is $33,503.51. Each of the Kings Bay defendants, as part of their sentencing, were ordered to pay it, according to Bill Quigley, a law professor emeritus at Loyola University in New Orleans who was part of the seven’s pro bono legal team.

“That does not mean that each one must pay $33,503.51 but each is legally, individually responsible for making sure the whole amount is paid,” Quigley wrote in an e-mail. “That means that the government can seek the whole amount of money from any one of the seven who they find out has resources. Because most of them do not have any income or property, some are paying $25 a month, others are refusing to pay. If the government finds that one or more own property, like an inheritance, which can be used to pay off the restitution, they will likely make some effort to seize the money.”

Joseph Zwilling, a spokesperson for the New York Archdiocese, said he didn’t know about the COVID cases at St. Joe’s and Maryhouse and couldn’t comment on members of the Catholic Worker movement joining Plowshares actions. He acknowledged that Cardinal Timothy Dolan, archbishop of New York, is “very supportive of the Catholic Worker movement, but we don’t have oversight over them and would not take a position. They are completely independent.”

Dolan, however, has been involved in a 20-year effort calling on Rome to consider canonizing Dorothy Day. Zwilling said the archbishop gave the homily at a packed Dec. 8 Mass at St. Patrick’s Cathedral on the Feast of the Immaculate Conception, which marked a conclusion of the evidence gathered by  supporters attesting to Day’s everyday holiness. That evidence, which included her writing and interviews (and weighed 70 pounds), was placed in 17 cardboard boxes tied with red ribbons and sealed, to be sent to the Congregation for the Causes of Saints in Rome.