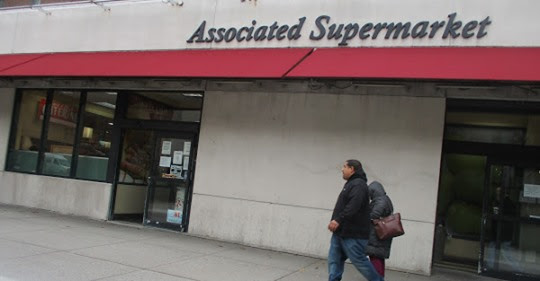 When a reporter for The Village Sun dropped by last Friday and peered into the E. 14th St. market, most of the inventory appeared to be gone and a sign at the checkout said, “We’re Closed.”

Two tall guys posted inside the place unlocked the door and, asked when the store had closed, answered Thursday.

Glen Bruno, one of the store’s co-owners, attributed a rent hike to the closing, saying it was also responsible for the closings in recent years of two other supermarkets that he co-owned.

The owners had to close the Met Food in Gramercy, at 17th St. and Third Ave., in 2015, and their Associated supermarket at W. 14th St. and Eighth Ave. the following year.

All the merchandise from the Stuy Town market was transferred to their store at E. Eighth St. and Avenue C, Bruno and his partners’ last remaining local supermarket of the four they once owned, he said.

The owner apologized to The Village Sun for the mixup on the E. 14th St. store’s closing date. He had said it would shut its doors Sat., Dec. 14, but it didn’t make it to then.

Bruno said that over last weekend they would be calling their regular customers from Stuyvesant Town and the surrounding area to let them know about their new delivery-by-car plan.

Starting Monday, he said, they would start taking orders by telephone and making deliveries by car to tenants in Stuyvesant Town, especially the elderly, who relied on them for the 26 years the store was there.

Bruno also said he and his co-owners were able to relocate all of the E. 14th St. store’s remaining employees — some 39 — to stores “that are friends of ours,” as he put it. Other workers at the location unfortunately had already been laid off.

Bruno was asked if the Associated supermarket on Avenue C is also in danger of going out of business.