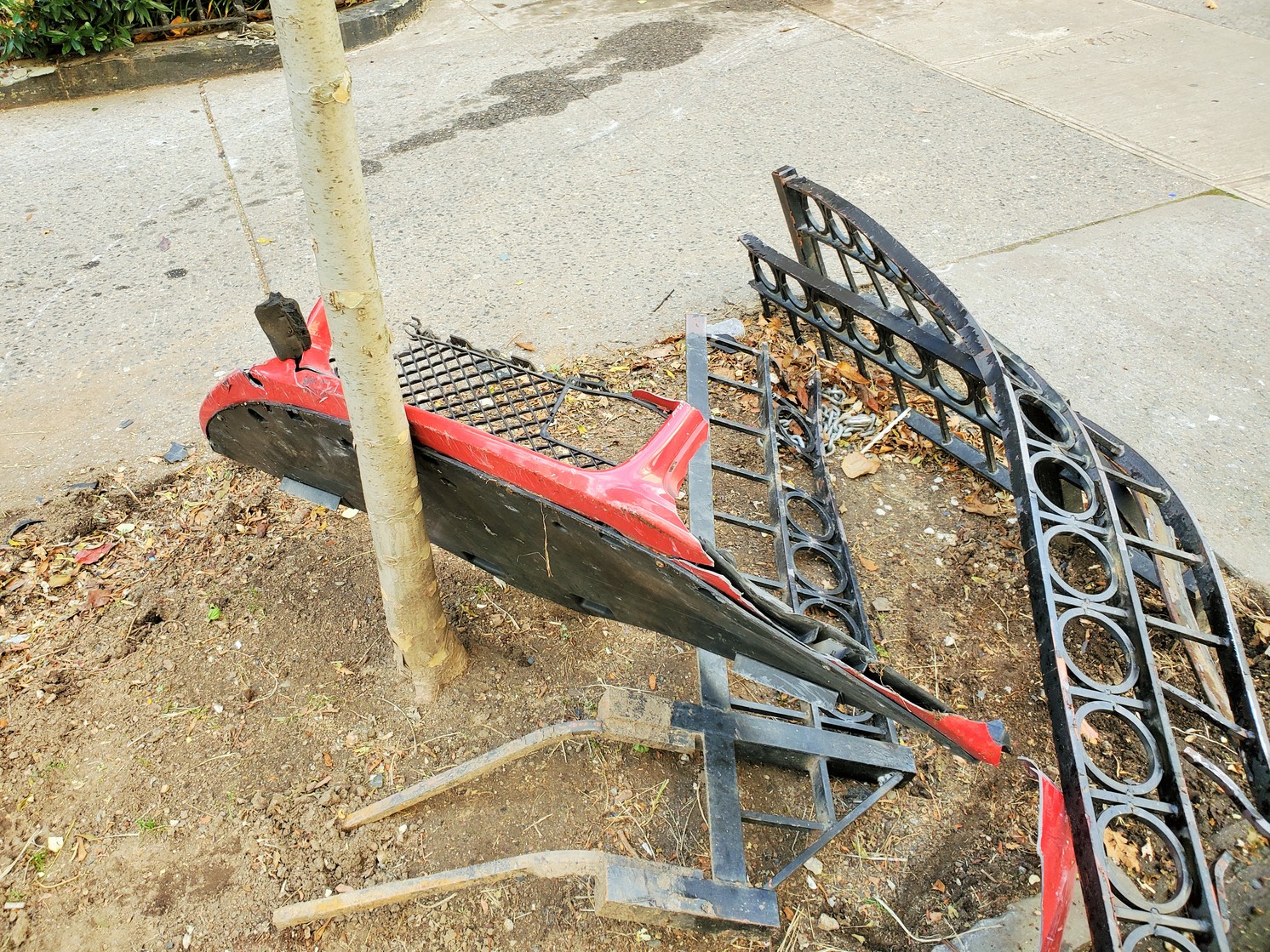 Part of the Jaguar's grille was left in the tree pit after the crash. (Photo by The Village Sun)

BY LINCOLN ANDERSON | Updated Tues., Dec. 21, 6 p.m.: A drunk driver in a Jaguar crashed outside a building in Greenwich Village in the early hours of Wed., Dec. 15, according to police.

The driver lives on Wall Street, according to police. She was charged with Aggravated Driving While Intoxicated.

Wednesday afternoon shortly after 1 p.m., the wreckage of the collision was evident.

Skid marks on the sidewalk led to where a 10-foot-wide section of the building’s wrought-iron fence was missing. Behind the fence, the trunk of a medium-sized tree in a planting area behind it had been snapped in two. Also, a steel tree-pit guard by the curb had been totaled, and a heavy-duty, circle-shaped CityRack bike rack had been snapped off at its base. Large and small fragments of the red Jag’s aluminum body lay scattered about.

Before slamming into the building fence and all the rest, the car had crossed a bike lane and buffer zone that are demarcated by flexible plastic delineators but not protected by a “floating” lane of parked cars.

The building, which is owned by The New School, is vacant and currently under renovation.

Passersby stumbling upon the accident scene were uniformly aghast.

“Oh, my God, what happened?” one woman blurted out in disbelief. “I live across the street and I never heard a thing. That tree is almost in the other yard,” she added of the damaged tree’s severed top half.

“I’ve lived on this street for years and never seen anything like it,” she said in disbelief.

“Oh, my God! I didn’t even hear it,” echoed another woman walking her dog past the stunning sight.

“Oh, my God! A school is down there! City and Country School is down there,” a third woman exclaimed into her phone to someone she was talking to as she walked by. “There are kids in strollers out here all the time.”

The school, serving students from second to eighth grade, is about 10 doors to the west.

A man with a pen stuck behind his ear who casually strolled out of 118 W. 13th St. confirmed the car was a Jaguar. He noted that the pricey vehicle had also taken out a solid bike rack.

He was part of the crew working on the renovation of the building, which he said might open this coming year.

Two of the women who were shocked by the crash scene were also not thrilled at the state of the vacant, seven-story building, whose renovation apparently is dragging on.

“It had black mold, that was the presenting problem,” one claimed.

“Yeah, it’s really an eyesore,” another said of the empty structure.

Meanwhile, the driver’s name was fairly distinctive, with the first name sporting an apparently uncommon spelling. An online search turned up LinkedIn and Facebook profiles for a woman of the same name and age that identify her as a “customer relationship management administrator” at Howard Hughes Corporation. However, neither of these profiles has been active lately. The Village Sun reached out via Facebook to the woman but there was no response.

Asked if the driver works for Howard Hughes, a spokesperson said, “This individual is not in our records as an employee of the company.”

Subsequent to this article’s publication and upon further research, he said it was determined that the woman, in fact, had a summer job three years ago as a waiter at Cobble & Co. at the South Street Seaport, where Howard Hughes is the master lease holder.

At any rate, the driver may well be off the road for a while. A first aggravated DWI offense is punishable by up to one year in jail, a fine of from $1,000 to $2,500 and license revocation for at least one year.