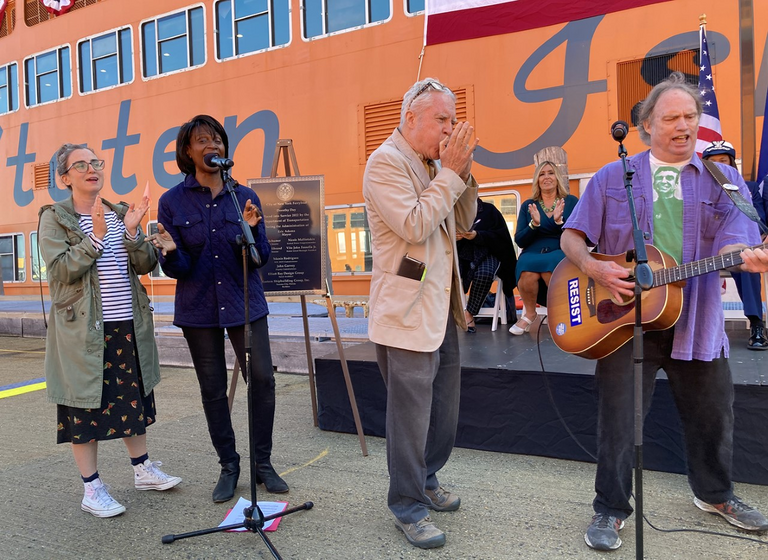 The Dirty Rotten System performed at the dedication of the Dorothy Day. (Photo by Tom Turner)

BY RACHEL deARAGON | On Nov. 4, a new Staten Island ferryboat, The Dorothy Day, was commissioned. Our city has honored a woman who dedicated her life to addressing the needs of those most neglected by society. With one foot in our socially frothy Lower Manhattan neighborhood, the other in the more rural corners of Staten Island, Dorothy Day and the Catholic Worker movement she co-founded 90 years ago spoke to the whirlwind of social contradictions that continue to beset our lives.

Gathered on a sunny dock in St. George, Staten Island, to reflect on her life’s accomplishments were a broad spectrum of people: politicians and clergy, followers and family members, volunteers, journalists and ferrymen. It was a joyful gathering. All were focused on trying to say it all, to sum up what was eloquently described as a life of sacrifice and service. Often a thorn in the side of government and Church, Dorothy spent her life speaking truth to power. Martha Hennessy, Dorothy’s granddaughter, a social activist in her own right, spoke movingly about her grandmother.

As a distant relative, I had known Dorothy since my earliest childhood. As I watched the ceremony, I could not help but feel that she was giving us all her joyful, thoughtful and ironic smile. Dorothy was witty, with a sense of irony and humor, a tall and cheerful presence in any room. She was thoughtful, humble yet forceful. She loved to think deeply and was always interested in what others were doing to bring harmony to this restless world.

Dorothy did not set out to forge a high-stakes career, become a leader or gain international fame. She certainly never sought recognition by the pope — let alone thought about canonization! She set out to pursue truth, and she attracted others who were involved in understanding the world and in finding ways to make meaningful changes in what she called, “a dirty, rotten system.”

At the commissioning of the ferryboat, the Catholic Worker-inspired music group, aptly named Dirty Rotten System, graced us with a beautiful hymn, “The Prayer of St. Mathew,” and a rousing “If I Had a Hammer.”

It was in Greenwich Village, about 100 years ago that Dorothy came of age. This was in the tumultuous years following WWI, when intellectuals were struggling to reconfigure our social vision. She lived among those whose voices are associated with the artistic and intellectual ferment in New York: Eugene O’Neill, Malcolm Cowley, Mike Gold, Emma Goldman, Claude McCay, Peggy Baird and John Dos Passos.

She was a young New York activist journalist and wrote for The Call and The Masses, left-wing publications addressing inequities that roared beneath the tinkle of illegal champagne glasses. Her story is, as she called it, a journey “From Union Square to Rome.”

Dorothy involved herself in the issues of her contemporaries. Those were the years of the struggle for women’s suffrage. It was a time when growing anti-immigration sentiment and Jim Crow laws and lynching deepened inequity. The expanding war industry intensified the encroachment on our environment. The Russian Revolution and the Irish War for Independence were violent responses to centuries of social violence and inequality. Her understanding of these issues intensified her search for peaceful solutions to social injustice.

Dorothy sought the tranquility of Staten Island’s South Shore. She wrote in a journal entry in 1977: “ How rich we are, we who profess voluntary poverty as a foundation of our work as agitators, to be able to take a ferry ride and be, within an hour, in [Staten Island], a rural area which still is part of New York City… . My conversion took place here… .”

Her conversion to Catholicism came with a deep understanding of the anguish that systemic inequity can cause. Her vision was not one of charity in the conventional sense, rather one that embraced the poor and afflicted and brought everyone to the table as equals.

In collaboration with Peter Maurin, himself a thinker in the tradition of the French Catholic personalist philosophers, she created the Catholic Worker newspaper and movement. The Catholic Worker was founded in the belief that discussion and understanding were as much a part of our sustenance as food and shelter. The Houses of Hospitality, as Maurin named them, provide not only basic sustenance, but also create a community of intellectual and spirtual support; there are two of them in the East Village.

Another important part of Maurin’s vision, the Catholic Worker farms strive to provide food for those in need, and forge a true working community among those who live and work on them.

The 1930s brought devastating falling wages and unemployment. American workers responded with strikes and protests. The Catholic Worker opened its doors on Mott Street and fed the hungry, striking seamen, many of whom became part of the organization.

Those years saw the suffering caused by the Depression and the horrors of the rise of fascism and WWII. Dorothy’s voice remained one of pacifism and hope. The Cold War and nuclear brinkmanship of the 1950s found Dorothy Day once again on the front lines for peace and disarmament. The civil rights movement and the Vietnam War called upon Catholic Workers to peacefully confront injustice and violence. When Cesar Chavez led the agricultural workers organizing in the 1960s and ’70s, Dorothy protested by his side.

The official views of the Catholic Church were changing. A new generation of post-Vatican II Catholics were ready to see their place among those who supported change. Dorothy was at the forefront of this intellectual shift within the Church. She corresponded with Thomas Merton and influenced Gustavo Gutierrez and the emergence of Liberation Theology.

An intellectual and prolific writer, her quest for a better world continues to attract many. There are now 178 Catholic Worker Houses worldwide! Yet the Catholic Worker, no matter how far it has traveled, is still rooted in the East Village. It remains a meaningful part of this community.