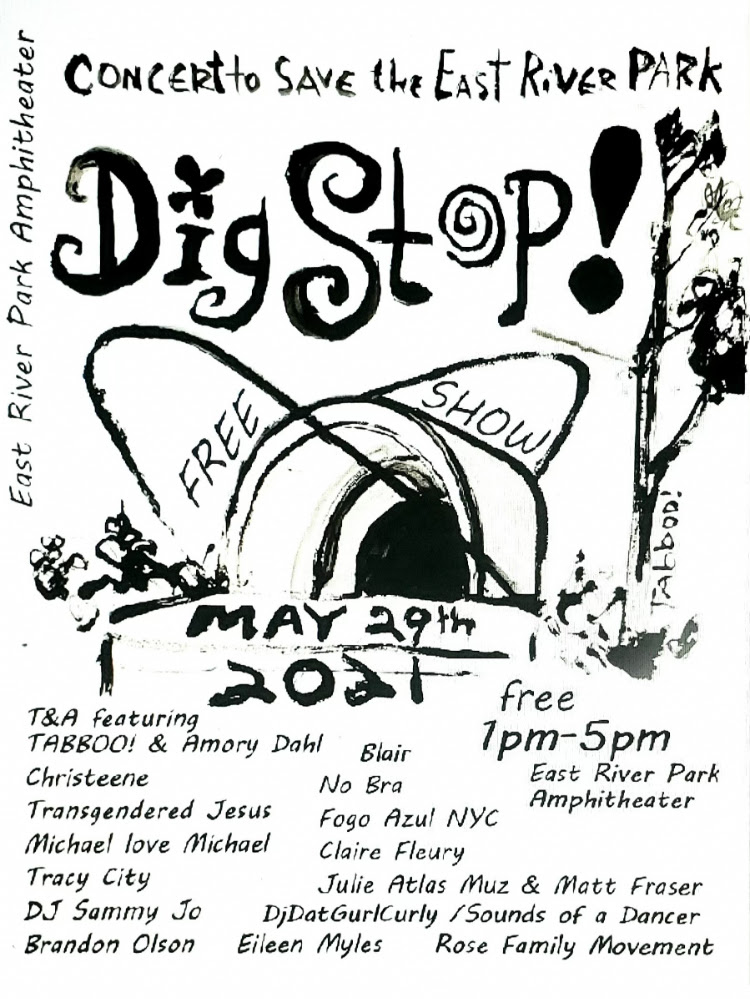 The group will hold a free concert in the East River Park Amphitheater (at the park’s southern end, across from the Corlears Hook footbridge) on Sat., May 29, from 1 p.m. to 5 p.m.

The groovy green affair is being dubbed not Woodstock but Dig Stop!

To support the group’s legal fund and just look cool you can buy East River Park T-shirts and totes, plus get a ticket for the “mystery bag raffle” of wearable goodies and gear donated by Patagonia, which supports East River Park ACTION’s cause of saving the park.

Many of the acts that will be performing are from the neighborhood, including Fogo Azul, Taboo, Christene, Tracy City, Michael Love Michael, No Bra and Family City Rappers and Julie Atlas Muz and Matt Fraser.

East River Park ACTION opposes the de Blasio administration’s $1.45 billion East Side Coastal Resiliency plan to bury the park under eight to 10 feet of infill soil to raise it above the floodplain. Instead, the activists support an earlier version of E.S.C.R. that called for berms and walls to be built in the park without needing to raise it. They plan to file a lawsuit appeal to block the current project if construction starts.

However, City Councilmember Carlina Rivera feels that the berms plan, among other problems, would be prohibitively costly due to large Con Edison power cables that run beneath the park and which would have to be moved for the project. Under this version of the plan, the berms would have concrete walls inside them that would extend 7 feet down, which would pose the risk of puncturing the unprotected cables and also of causing water to pool around them.

However, Pat Arnow of East River Park ACTION said, according to the value engineering study for the E.S.C.R. plan, the earlier version had an option for building a tunnel under the berms, using concrete precast “U” sections, to keep the power lines accessible to Con Ed.

“In order to construct the flood wall and levees on the west edge… A large tunnel will be constructed around multiple Con Ed transmission lines to avoid relocation of the lines,” the report explains.

But in a statement to The Village Sun, Rivera stood her ground.

“We need these resiliency protections immediately,” she said, “not early pre-engineering proposals that would have required moving and encasing massive transmission lines — with serious excavation work immediately adjacent to tens of thousands of NYCHA and subsidized homes — and which was just one of several items that posed risks of major cost overruns and years of delays. That is the exact opposite of what these residents — who have been crying out for a plan since Sandy devastated our community — want to see happen when presented with the facts, not hyperbole and misinformation.”

East River Park ACTION and Rivera apparently will agree to disagree on this point. But one thing is for sure, the electricity Saturday will be at the amphitheater concert.

Clarification: An earlier version of this article quoted a staff member of Councilmember Carlina Rivera saying that the councilmember opposes the original berms resiliency plan for East River Park because it would require moving the Con Ed power lines that run beneath the park, which would be too difficult and expensive to do. That conversation was off the record. The Village Sun apologizes to the staffer.