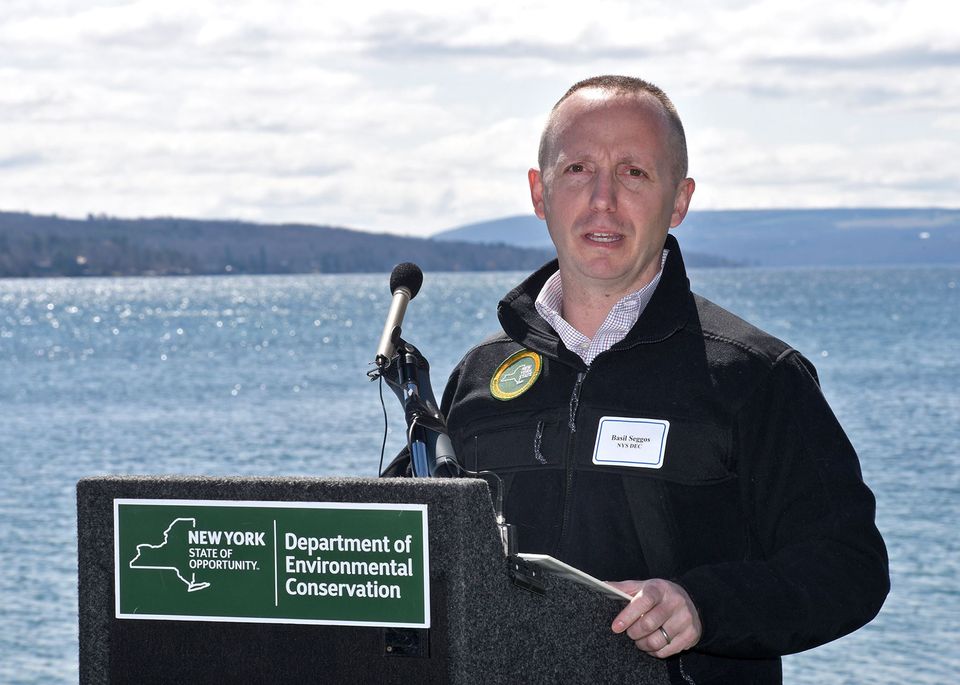 Basil Seggos, the commissioner of the New York State Department of Environmental Conservation, is taking over as the board chairperson of the Hudson River Park Trust. (Facebook)

BY LINCOLN ANDERSON | Updated Mon., Sept. 14, 12:30 a.m.: In a pair of major shakeups at the Hudson River Park Trust, the park authority’s board chairperson, Diana Taylor, is being replaced by Basil Seggos, while, separately, Douglas Durst has resigned from the board in frustration over a “lack of transparency.”

Taylor, the girlfriend of former presidential candidate and ex-Mayor Mike Bloomberg, has led the Trust’s board of directors for the last 13 years.

Seggos already is a sitting Trust board member.

For the past three years, Seggos has been the commissioner of the New York State Department of Environmental Conservation. In addition, he is an adviser to Governor Cuomo on environmental policy and issues.

Prior to becoming D.E.C. commissioner, Seggos served as Cuomo’s deputy secretary for the environment, counseling the governor on environmental policy and the operations of New York’s environmental agencies.

Before his career in state government, Seggos was the chief investigator and attorney for Riverkeeper — the leading nonprofit dedicated to protecting the Hudson River — and an attorney at the Natural Resources Defense Council.

Seggos earned his B.A. from Trinity College in 1996 and his law degree from Pace University in 2001, where he received the Environmental Law Award. He is also a captain in the U.S. Army Reserve.

Park stakeholders first got word of Seggos’s appointment from Cuomo’s office on Friday. Two members of Community Board 2, including Daniel Miller, the board’s first vice chairperson, confirmed to The Village Sun that they were aware of the appointment. The other board member spoke off the record. C.B. 2 includes the Greenwich Village and Hudson Square sections of Hudson River Park.

In a statement to The Village Sun, Madelyn Wils, the Trust’s president and C.E.O., praised Taylor’s tenure at the authority’s helm, and noted that Seggos is “well versed” in the park.

“Diana has been a steadfast champion of Hudson River Park since its inception and served graciously as chairperson under three governors,” Wils said. “Throughout her tenure, she has worked closely with the Trust’s board and staff to fulfill the governor’s goal of finishing the park. And thanks to that work, the Trust is overseeing nearly a billion dollars in ongoing projects that have put us in position to finish the final 25 percent of the park in the next few years. Her work continues, yet she will be missed.

“At the same time, we welcome Commissioner Basil Seggos as our next chairperson. I have worked with Basil for many years during Governor Cuomo’s administration, first as deputy secretary for the environment and then as D.E.C. commissioner and a Trust board member. Basil is well versed in Hudson River Park and D.E.C. is a great partner to the park. We look forward to working with him to complete the park.”

Tom Fox, a longtime Hudson River Park advocate and current member of the park’s advisory council, said he was heartened by Seggos’s appointment, from an environmental standpoint. The park, which stretches from Chambers St. to 59th St., is actually mostly water, since its boundary stretches out to the pierhead line of its dozen-or-so piers.

“I think it’s a good thing for us,” Fox said. “We’re moving into this stage where people are paying more attention to all the [park’s] in-water assets — the underwater estuary restoration, maritime navigation. He’s got experience with Riverkeeper. … I should say that it’s about time that an environmentalist ran the Trust.”

However, the question of who actually is running the Trust — the board or its staff — is directly behind Durst’s departure.

The leader of the Durst Organization, one of the city’s top development companies, Durst for years has also been a leading advocate for the Hudson River Park. He formerly was chairperson of the Friends of Hudson River Park, but left the advocacy group in 2012 when a plan of his to repair and redevelop Pier 40 was nixed by the Trust. The Trust’s staff had claimed it would cost up to $80 million to repair the massive W. Houston St. pier; but Durst pegged the cost far lower, at $30 million.

Speaking to this reporter three years ago, Durst said, “If they had listened to us, they could have had [Pier 40] finished and throwing off money by now, and you wouldn’t have needed air-rights transfers.”

The Trust’s staff is headed by Wils, a former executive vice president with the city’s Economic Development Corporation.

Not exactly earning him any gravy points with the Trust, more recently, Durst notably funded a lawsuit to stop Barry Diller’s $200 million Pier 55 project, at W. 14th St. Fox was one of the plaintiffs in the suit, which was originally funded by Riverkeeper and which nearly scuttled the glitzy project.

Nevertheless, in 2018, the billionaire developer reengaged with the park when Manhattan Borough President Gale Brewer appointed him to the Trust’s board of directors.

Matthew Washington, deputy Manhattan borough president, confirmed that Durst had tendered his resignation from the Trust board to Brewer. Washington forwarded Durst’s resignation letter, dated Aug. 13, to The Village Sun. In his letter, also addressed to Taylor, Durst slams the Trust’s staff for a lack of transparency and for running the park “with the minimum consultation possible”:

“Dear Mses. Brewer and Taylor,
I have made the decision to resign from Hudson River Park Trust effective immediately. As you know, for many decades I have been an advocate for the Park, and the Borough President and I hoped that in my role as a Trustee I could focus my advocacy on increasing transparency and collaboration with the Trust and other stakeholders. Unfortunately, this has been more difficult than I anticipated. The culture of the Trust is to run the Park with the minimum consultation…possible. The Board, while a component of the organization, is engaged only when necessary, and then usually post facto. My efforts to increase transparency and openness have not been as successful as we intended, and I have been relegated to being a gadfly. I believe I can be a better advocate for the Park outside of the organization.

“I appreciated the congeniality of the Board, and my fellow Board Members’ service and commitment to Hudson River Park.

The deputy borough president said Durst had done a great job while on the Trust’s board.

“We loved having Douglas on the Hudson River Park Trust board,” Washington said. “Gale values Douglas immensely and was excited when he agreed to serve on the board. And he was just the model of what a board member should be. He attended not only the Trust board meetings, but numerous community board meetings in Boards 1, 2 and 4 when the park was being discussed. We are sad to see him go, but understand that the feeling of being a ‘gadfly’ isn’t going to give you the encouragement to remain on the board.”

As for park projects that Durst may have felt left out of the loop on, the brief letter doesn’t go into specifics. But there are clearly some usual suspects. Obviously, Pier 40 and Pier 76, at W. 36th St., are the major piers right now that the Trust is seeking to redevelop. In January, Governor Cuomo vetoed a plan that had been approved by the State Legislature to allow 800,000 square feet of commercial office space on Pier 40, then gave the city one year to relocate the Police Department tow pound off of Pier 76 or face steep fines starting at $1 million per month, rising to $3 million per month in 2021.

According to Washington, on a smaller scale, Durst was also unhappy, for example, that the historic Sherman Zwicker schooner, home to the Grand Banks bar and restaurant, had been allowed by the Trust’s staff to moor at the park’s Pier 25 in Tribeca.

“Douglas felt that was a contract that should have gone through board approval,” Washington noted.

Closer to home, Durst also reportedly, at points, was frustrated about the slow pace of getting the landscaping completed for Pier 97. The pier sits directly across the West Side Highway from his pyramid-shaped, 700-unit Via apartment building, at W. 57th St. The pier has been rebuilt, but continues to remain a barren concrete slab. However, a plan finally is in place to do the landscaping.

Regarding Pier 97, a Trust spokesperson said, “We are proud to have worked closely and productively with the community through meetings held with Community Board 4 and our board throughout the Pier 97 design process, and look forward to breaking ground on that pier in 2021.”

Park advocates have also voiced concerns about exactly what the Trust is doing with the $100 million in funding it got from selling unused air rights from Pier 40 to the development project at the former St. John’s Terminal site, at W. Houston and West Sts. In short, park watchdogs want to know whether all of those funds are being used to repair the rusting substructure and other rundown parts of the pier.

“This rumor is total nonsense,” the Trust spokesperson said. “The funds are being spent on Pier 40 pile and infrastructure repairs, which are documented and ongoing, as we’ve noted repeatedly.”

Brewer has not tapped anyone yet to replace Durst on the Trust’s board. Each of her three appointees on the 13-member board represents one of the three community boards that border the park.

As for who made the call to appoint Seggos to head the Park Trust’s board, Fox said it’s very clear.

“It’s all about Andrew,” he said, referring to the governor. “Basil was his environmental commissioner.”

On Taylor’s tenure ending at the state-city park authority, Fox said, “It’s been too long. It’s time for a change.”

Correction: The original version of this article said one reason Douglas Durst may have been frustrated with the Hudson River Park Trust was an alleged lack of clarity on the completion of the landscaping of Pier 97. However, while Durst may have been frustrated over the state of Pier 97 in the past, there is now a plan in place to landscape the pier.