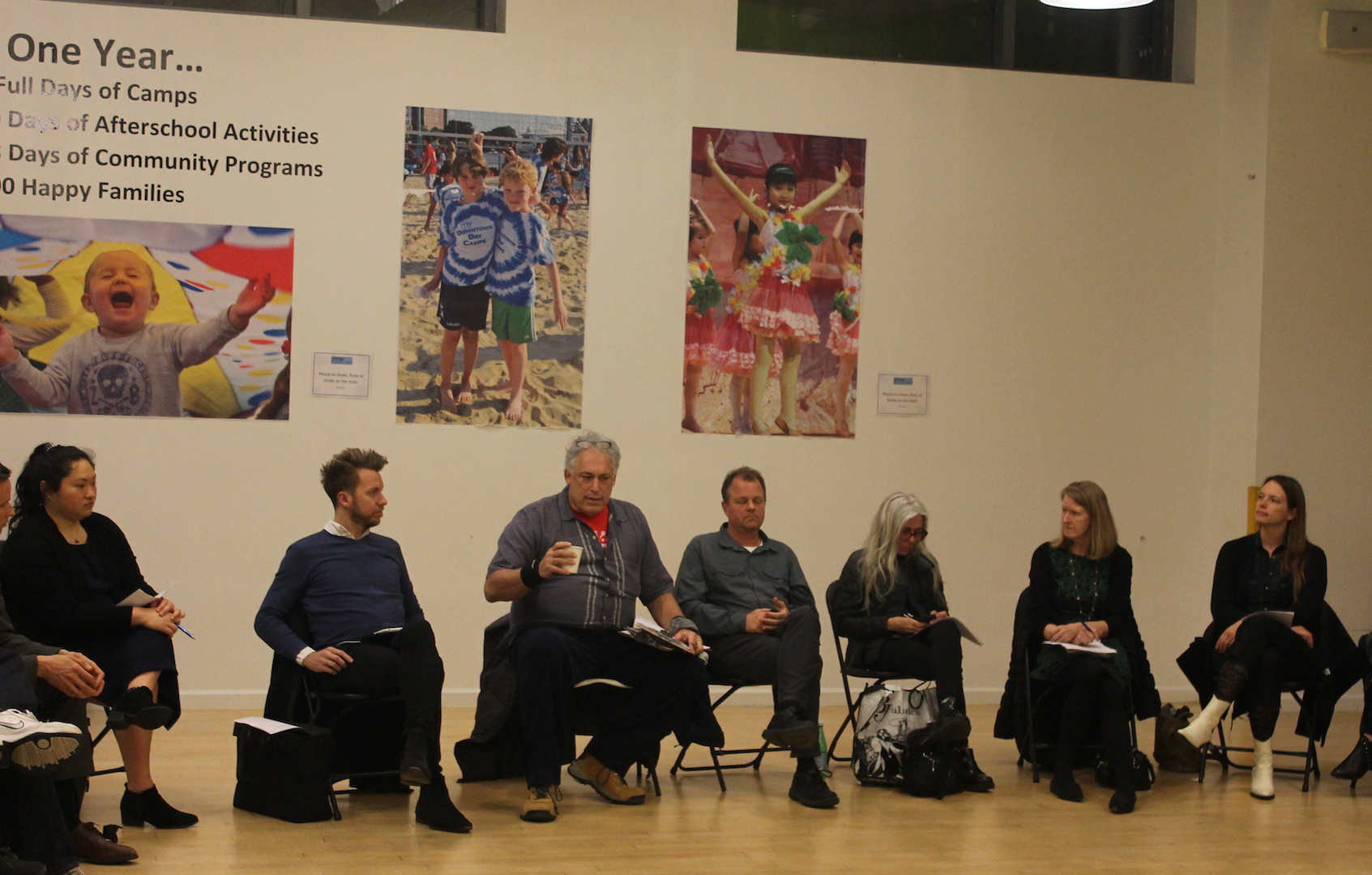 BY LINCOLN ANDERSON | Following up on his pledge in his State of the State address to push the entrenched police tow pound off of Pier 76, Governor Cuomo has included legislation in the state budget mandating steep fines if the police don’t clear out by year’s end.

The legislation says New York City must convey the Hell’s Kitchen pier to the Hudson River Park Trust on or before Dec. 31, 2020. If that deadline is not met, the city must pay the Trust $12 million — or $1 million for each month the tow pound remained on the pier during 2020.

And, under the proposed legislation, if the tow pound still isn’t off the W. 36th St. pier by Feb. 1, 2021, the stakes rise even higher, and the city must pay the Trust $3 million per each full or partial month that the police facility is still on Pier 76.

The founding Hudson River Park Act of 1998 — which created the 4.5-mile-long waterfront park — states, “The city of New York shall use best efforts to relocate the tow pound on Pier 76.”

But, in the ensuing more than two decades, the tow pound hasn’t budged.

Their frustration boiling over, this past November, the Hell’s Kitchen Neighborhood Alliance filed a lawsuit against the New York Police Department and the city to get the tow pound off the pier. They are being represented by the law firm of Alterman & Boop.

The city’s Law Department recently responded to the H.K.N.A. court papers with a “movement to dismiss,” which Boop said was not surprising.

“The city’s saying that there’s no one that can enforce this,” she said. “They suggest that the Trust is the enforcement mechanism, but I think they’re wrong.”

Pier 76 is technically still owned by the city.

When the Park Act was signed, the rest of the entire park was transferred to the Trust, the state-city authority that is building and operating it. This even applied to Gansevoort Peninsula, which, at the time, still had a working city Department of Sanitation garage on it.

But, for some reason Pier 76 was carved out in the Park Act, so that only after the tow pound vacated the pier, would the pier then be transferred to the Trust.

But Cuomo’s move seeks to break the stalemate.

“The legislation by Cuomo sets a firm deadline by the end of the year to get off Pier 76,” Boop said. “It would be tough for the city to fight Cuomo’s legislation if it passes.”

If still necessary, Boop said she would hope Cuomo — or state Attorney General Letitia James — would intervene in the H.K.N.A. lawsuit, either by joining it as a petitioner or by supporting it with what’s known as an amicus brief.

But there are new challenges looming now — mainly, that Cuomo is seemingly pushing for plans for Pier 40 and Pier 76, but in an accelerated time frame.

In late December, the governor stunningly vetoed a bill that would have allowed an 800,000-square-foot commercial office building to be built on Pier 40, at W. Houston St., to generate revenue for Hudson River Park. Under the Park Act, office use is not allowed in the waterfront park — though an amendment a few years ago allowed it at Pier 57, at W. 15th St., where Google will have offices.

Less than a week after vetoing the Pier 40 plan, Cuomo announced his new push to get the tow pound off of Pier 76 — plus also said that both Piers 40 and 76 must now go through a community planning process.

“The Hudson River Park must…develop an improvement plan for Pier 40,” Cuomo said in a statement on Jan. 5. “In developing the plans for Pier 40 and Pier 76, the Hudson River Park Trust should develop a comprehensive parkwide financial and use strategy and if [the Trust] believes a plan would require any additional legislative authorization, they should present such requests by May 1 to be considered prior to the end of the legislative session.”

It’s that May 1 date set by Cuomo that has some park activists concerned. Admittedly, it’s been an issue when amendments to the Park Act pushed by the Trust have been introduced and voted on in a rush at the end of the state legislative session in June. Although, the Trust would argue that’s when Albany typically passes much of its legislation.

But there is skepticism that a bona fide community process can be conducted for two vitally important park piers in such a small window of time — about two months, which would then leave the state Legislature just a month to draft any proposed amendments to the Park Act that might be needed.

“The Trust couldn’t possibly plan for 10 acres of park in two months,” Fox told the meeting.

He was combining the acreage of public park space on both Piers 40 and 76 — 50 percent of the footprint of each pier must be reserved for open space use under the original Park Act.

More to the point, Fox said, “Why do we rush such an important decision?”

As he stated at the meeting and later elaborated on to The Village Sun, Fox noted that the governor will be in office three more years while the police tow pound, in Fox’s estimation, probably isn’t vacating Pier 76 for a year, since the deadline set by the governor for that is Dec. 31, 2020.

“How do you have to do a plan for Pier 40 and Pier 76 — which is 21 acres — in three months?” he asked, this time referring to the combined open space, plus commercial space on both piers. “And that’s not going to happen because the Hudson River Park Act requires the Trust to have the review and approval of the community boards, the Advisory Council and the elected officials, in that order,” Fox asserted, meaning there won’t be time for this required robust review process.

Indeed, under the Park Act, when there is a proposed “significant action” for the park, the Trust must hold a public hearing and “solicit and consider the views” of Community Boards 1, 2 and 4, the Advisory Council and local politicians, among others.

And the governor’s Jan. 5 statement on Piers 76 and 40 did include a section — specifically referring to Pier 76 — stating, “The Hudson River Park Trust, in consultation with the City of New York, the relevant community boards and representatives, the local elected officials and Assembly and Senate members, and other stakeholders, will develop a reuse plan.”

Cuomo’s statement also said: “In developing the plans for Pier 40 and Pier 76, the Hudson River Park Trust should develop a comprehensive parkwide financial and use strategy.”

Noreen Doyle, the Trust’s executive vice president, said the N.Y.P.D. had only been in “the first phase” of figuring out how to move off the West Side pier, including looking at the idea of using stackers if it could find a suitable site somewhere for a tow pound.

Doyle added Cuomo is the one calling the shots on kicking the tow pound off of Pier 76.

“This request initiates with the governor and the Trust has zero control,” she said, adding the Trust has to follow Cuomo’s directive.

Jeffrey LeFrancois, the executive director of the Meatpacking Business Improvement District and an Advisory Council member, said the governor’s intervention also means the time for action on Pier 76 is now.

“We…have an opportunity we haven’t had in 20 years,” he said. “We have to capitalize on it.

“Twenty years of ‘making their best effort,’” he scoffed of the Police Department. “They didn’t make any effort.”

Dan Miller, the Community Board 2 representative on the Advisory Council, shrugged that his board, which covers the Village stretch of the waterfront, isn’t exactly sure what to do at this moment.

“I don’t see any direction to follow right now,” he stated.

Miller, who is a former president of the Greenwich Village Little League, is a staunch advocate of protecting the playing fields on the 14-acre pier.

Robert Atterbury, a rep from Congressmember Jerry Nadler’s office, said the legislation proposed by Cuomo “isn’t that specific” but that he’s sure the Advisory Council will be able to have input on the planning process for both piers.

In a unique process — working on recommendations from C.B. 2 and a previous Pier 40 Working Group — the area’s local politicians had hashed out the design parameters for Pier 40 that formed the basis of the aborted office-building bill. But the Trust’s Doyle said nothing’s set in stone, at this point.

“I’m not saying we’re bound by the previous conversation,” she said. “We’re trying to start fresh.”

“It doesn’t sound like the community boards are working on it,” observed Bob Townley, the head of the Advisory Council, adding, “We have about eight weeks.”

Townley, who runs Manhattan Youth, said he had spoken to Cuomo just that day and, in fact, even had the governor “on speed dial.” But he was just joking.

The youth advocate then threw out an idea that took some in the room by surprise: Why not move the tow pound from Pier 76 to Pier 40?

There was some clear discomfort at the notion — with interjections of “Whoa!” and “Wait!” — but Townley didn’t back away from it.

He said he was only putting the idea out there, but that it should be considered.