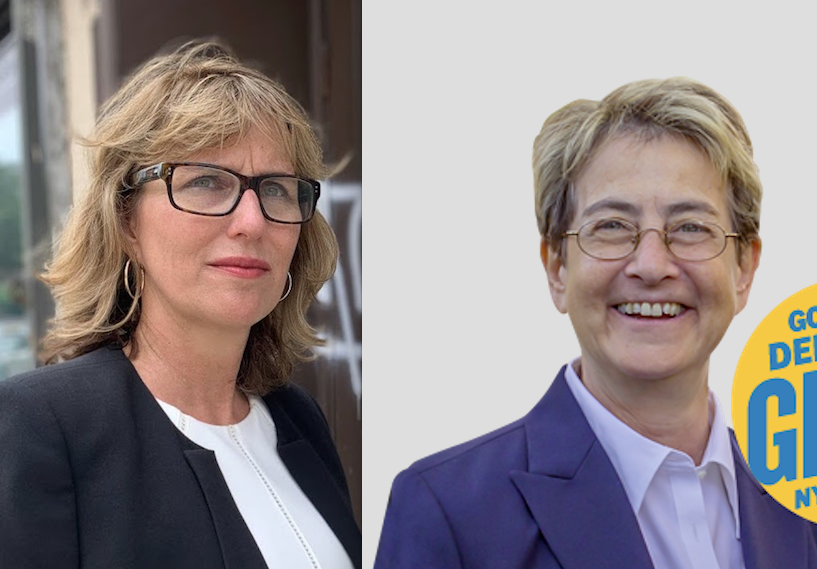 Tamara Lashchyk, left, is on the ballot against Assemblymember Deborah Glick in the 66th Assembly District.

BY LINCOLN ANDERSON | All eyes are on the race for president, and a record number of people have already voted early.

But in the Village, Soho and Tribeca, there’s a race on for Assembly in the 66th District. It’s actually been years since Albany veteran Deborah Glick has faced a Republican challenger. In this unique election year, though, she has one now in Tamara Lashchyk.

Glick, who lives in Greenwich Village, is seeking her 16th term in office. She was the first openly gay member of the Assembly. Since 2007 she has chaired the Assembly’s Education Committee. Her legislative victories have included the Sexual Orientation Non-Discrimination Act (SONDA) and the Hospital Visitation Bill, providing partners with the same rights to visit as next of kin. The assemblymember been a longtime advocate for women’s issues, tenants and pedestrian rights, among others.

For Lashchyk, who lives in Soho, this is her first political campaign. She spent 25 years working for top Wall St. firms, including JP Morgan, Bank of America Merrill Lynch and Deutsche Bank, with 10 years working in H.R. She recently left the financial world and for the past year has been a career and business coach.

In a recent phone interview, a confident-sounding Glick was not particularly interested in talking about either the race or her opponent.

“I believe 95 percent of winning reelection is doing my job 100 percent, so that is what we are doing,” she said.

She said that, amid the pandemic, her main concerns are the survival of local businesses, unemployment and fighting for federal aid. She’s been delivering PPE around the district.

Glick said she disagreed with the mayor’s recently downplaying the importance of the need for Manhattan’s central business district to bounce back amid the COVID crisis. According to reports, only around 15 percent of Midtown office workers are actually back working at their offices, with most still working remotely from home.

“There’s no question,” she said, “what has always driven New York has been the daily influx of hundreds of thousands of people [to the central business district]. The businesses that depend on lunchtime activity, they don’t have that happening. Obviously, we don’t have tourist activity.

Right now, Glick is also focusing on the de Blasio administration’s proposed rezoning for Soho and Noho, which had seemed shelved back in January, but recently was revived.

“I think everyone is pretty shocked, given the city’s response after the Soho/Noho Envisioning report, which was ‘We’re not doing anything’ — which was a lie,” she said.

Charging that the rezoning is developer driven, she said, “I think it’s largely a bait and switch.”

Specifically, like others, Glick objects to the disproportionate amount of luxury housing that the plan would allow to be built in the two Downtown districts, albeit with a far smaller percentage of affordable housing.

“Homogenizing New York started under Bloomberg and has not stopped under de Blasio,” she stated.

As for Lashchyk, Glick would only offer, “I became aware of her — although it is not anyone that I have ever seen at a community meeting or has ever written to us on any issue. So I can’t say that I know the person. I don’t know if she has any knowledge of the issues.”

Lashchyk spent the first seven years of her life in the East Village but then grew up outside of the city. While Glick has lived in the Village 40 years, Lashchyk has lived in Soho for five years, previously residing in New Jersey.

In addition to working in finance, she authored a book, “Lose the Gum: A Survival Guide for Women on Wall Street.”

Lashchyk said she went into finance because, growing up, her middle-class family was economically insecure, living above their means, to the point where sometimes their lights were shut off. So she wanted to make a good living.

As for her campaign issues, she said, if elected, she would focus on the local economy, helping restaurants and businesses struggling during the pandemic.

“I think right now, we need to get New York back on its feet… . I would definitely lobby, starting point at 50 percent,” she said, regarding pushing for increased restaurant indoor seating capacity.

Her second major issue is tackling crime. Bail reform, in her view, needs more adjusting to bring it back into line.

“In July they did some changes, but it needs to be stronger,” she said, adding, “I think that police are not allowed to do their jobs.

“You want to talk about defunding the police when things are going good,” she said. “I live in Soho and I went for a walk today and people are boarding things up. I mean, where are we living?”

Lashchyk said she always has been interested in politics. As for why she decided to challenge Glick, she said local G.O.P. activists initially had asked her to run for Congress back in January. But she felt there was not enough time to mount a race for that office, which involves a much bigger district and more campaign expenses, so set her sights on Assembly.

Asked if she backs fellow G.O.P’er Trump, she said yes.

She admitted that Trump is “boorish,” but shrugged, “I know 25 guys on Wall St. with personalities like that.”

She added that she thinks China should pay “reparations” due to the devastating impact coronavirus has had on the U.S. economy.

To Glick’s accusation that she hasn’t seen Lashchyk involved in the community, the Republican candidate conceded, “I’ve just been engaged in the community the last year. I used to work a 12-hour day until a year ago.”

Under current zoning (the one the mayor is rushing to change in his last year in office), Soho residents are supposed to be certified artists. Yet the city has long turned a blind eye as hedge funders, lawyers and other affluent types have flocked to live in the once solidly artistic enclave.

“I am not a certified artist,” Lashchyk admitted. “I am not an artist really. I am definitely a Downtown girl. I used to joke I didn’t go north of 14th St.”

Speaking of getting around, she’s also a big Citi Bike user.

“I ride Citi Bike everywhere,” she said. “I hate walking. Biking is the best way to get around town.”

While Glick was blasé about Lashchyk, clearly not seeing her as competition in the solidly Democratic district, there was one competition she was glad to discuss — namely, pro football. She’s a huge Giants fan.

“I’m very happy with the new coach,” Glick enthused. “But we need a quarterback that’s ready for prime time. The frustrating thing about [Daniel] Jones is he has flashes of accuracy and completions — but he has no pocket awareness. … You’re sitting there saying, ‘Get rid of the ball! Get rid of the ball!’ He gets sacked and then he loses it.”

Glick tweets a running commentary during Big Blue’s games. Even on the eve of the momentous presidential election, she made a couple of tweets about the Giants-Buccaneers Monday Night Football game, finding something to cheer in a so-far dismal season.

8:30 pm night before the election- good to have a distraction- @Giants forcing a fumble & actually getting a TD by pass out of it— incredible.