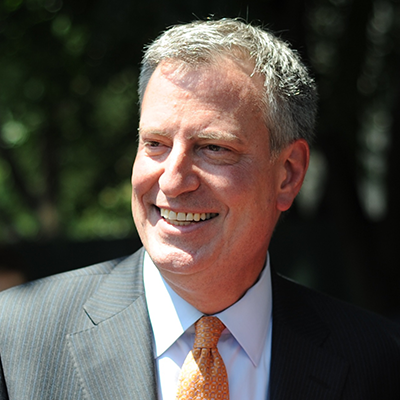 BY THE VILLAGE SUN | Could Bill de Blasio become Downtown’s next congressmember? He thinks so. “Absolutely,” to quote him.

With the recent redrawing of New York congressional district lines by a special master, all of Manhattan south of 14th Street now lies within one district. This new district also includes progressive Brownstone Brooklyn neighborhoods like Park Slope — where de Blasio owns property and used to live — and Brooklyn Heights, along with the more conservative Borough Park.

Others eyeing the new 10th District seat include state Senator Brad Hoylman, who tweeted that he is “seriously considering” it, and Assemblymember Yuh-Line Niou, who tweeted she’ll be making an announcement about her “electoral plans” this Saturday in Chinatown.

Former Comptroller Scott Stringer, who lives in the Financial District, is also being mentioned as a potential candidate.

Thursday morning, de Blasio sent out an e-mail blast to his base — with the sentence annoucing that he is exploring a run written in bold-face type.

“As someone who has supported me through previous campaigns, I wanted you to hear it directly from me,” de Blasio said in the message.

“I am filing an exploratory committee for the newly created 10th Congressional District in New York.

“Our neighborhoods need help as we recover from COVID.

“Our nation needs help as democracy is threatened and working people struggle.

“I am ready to serve and continue the fight against the inequality that plagues us.

“But I cannot do it alone.”

The e-mail then goes on to urge people to become “founding members” of the former mayor’s exploratory campaign for District 10, with a pitch for funds, complete with a “Contribute Now” button to click. The contributions page, when opened, includes boxes with various cash amounts to donate, starting with $5 and going up in increments to $1,000, plus a box to give an even higher amount than that.

In a note on the contributions page, de Blasio emphatically states that he is “immediately forming” the exploratory committee.

“This new district includes almost all of my old City Council district [in Brooklyn] and areas we did very well in during both of my mayoral campaigns,” de Blasio continues in the main e-mail pitch.

“In other words, this is a seat that includes areas we’ve won before, and areas we can win again,” he states. “Will it be easy? No. Can we do it? Absolutely.”

The pitch ends with yet another solicitation for campaign funds and another clickable link so people can give.

Kathryn Freed, a former Lower Manhattan city councilmember, for one, was not excited by the prospect of a Congressmember de Blasio. Freed, who is an attorney, battled in court to try to stop the de Blasio-backed East Side Coastal Resiliency project from destroying East River Park, and also vehemently opposed the Soho/Noho rezoning, another major de Blasio pet project.

“I think he’s highly detested on the Manhattan side [of the district],” she said, “and since the Brooklyn side is the progressive area of Brooklyn, I doubt he could win. I don’t think he realizes just how much he is disliked.”