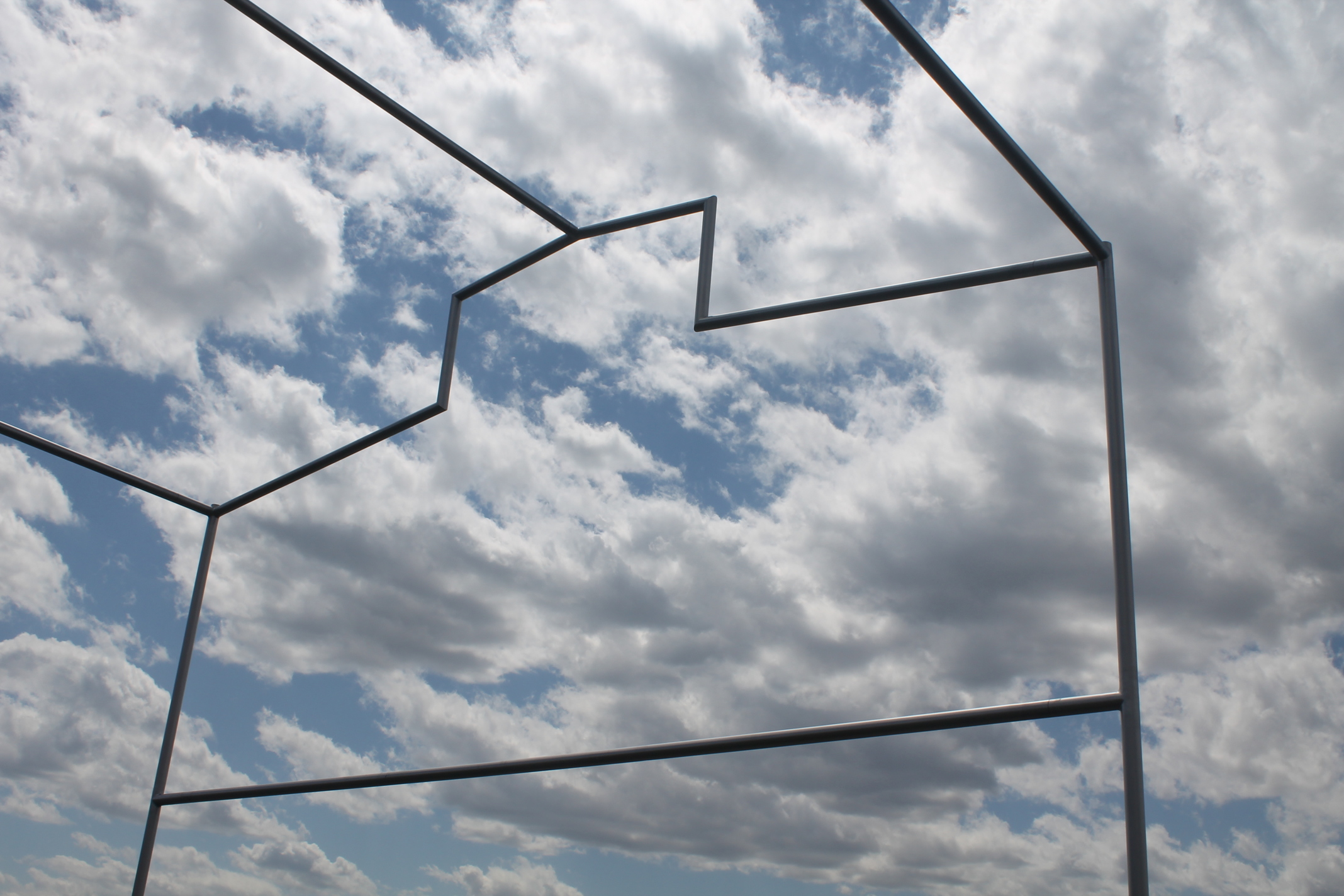 BY LINCOLN ANDERSON | And so begins… “Day’s End.”

On April 29, the installation of David Hammons’s “Day’s End,” one of the largest public art projects completed in the United States this year, was completed on the Greenwich Village waterfront.

A permanent sculpture, it sits off the southern edge of Gansevoort Peninsula. Hammons was inspired by Gordon Matta-Clark’s 1975 “intervention” that saw the latter cut openings into the abandoned Pier 52 shed that then sat at the same spot. The pier was later demolished.

The artwork was sponsored by the Whitney Museum of American Art, which is located directly across the West Side Highway from it. However, “Day’s End” is situated on public land and so is not owned by the museum. Instead it is “owned by everyone and by no one, open and free to all,” said Adam Weinberg, the Whitney’s director.

On May 11, Weinberg led reporters out onto Gansevoort Peninsula on a tour of the artwork.

He explained that the structure was created in four different countries. The steel was made in Belgium, the cast elements in Brazil, the bending of the tubes was done in Italy and the machine parts for the assembly were made in Toronto.

The project’s conception was six years in the making. The fabrication took two and a half years. The last step, installation, was a breeze, taking just three weeks.

The piece is precisely leveled and aligned, Weinberg noted.

The steel of the artwork is painted a platinum color.

“We gave David a palette of colors, from totally unfinished to totally reflective,” Weinberg noted. The chosen silver hue, he said, “both absorbs the light and reflects the light.”

There will, however, still be “ambient light” — just from the surroundings and the fact that it’s New York City — that will illuminate the piece in the evening, he added.

“This is not a project that all people necessarily get,” he stated. “It’s not a structure, it’s not a building. People look at it and ask, ‘When will it be finished?’ It’s art. … It’s like drawing in space.”

In short, art does not necessarily provide pat answers and neither does “Day’s End,” he said.

The museum director also offered that it’s fitting for Hammons’s major public artwork to be feted at this particular moment in time. The project was conceived before George Floyd’s police-involved killing and the Black Lives Matter protests that swept the country last year.

He described Hammons as “gracious, serious, shy, elegant — but clear, clear, clear as he can be. He does it a lot by intuition, by gut.”

Yet, the artist is “not a micromanager,” Weinberg said. He noted, for example, they had invited Hammons to attend community board meetings at which the project was discussed, but he declined.

Weinberg said the artist was unfazed by the fact that a beach will be created on Gansevoort next to “Day’s End” and that kayakers will likely be paddling like water skeeter bugs amidst the piece’s poles. The beach will feature a small-boat launch area.

Weinberg noted that the beach’s sand won’t actually be along the waterline since it would wash away, but will be located a bit higher up on the peninsula’s southern edge.

A Midwest native, Hammons relocated to New York City in 1974. Focusing his work outside the traditional realms of art making, he did “elusive actions.” One of these was “Bliz-aard Ball Sale,” in 1983, in which he sold snowballs on the street in the East Village.

Hammons is not getting anything, other than personal satisfaction, from doing the Gansevoort public artwork, which cost around $18 million.

“Not a penny,” Weinberg said. “All the money went to the creation of the project. Nothing went to the artist or the museum. It’s a gift to the city.”

The art installation was made possibly by the Hudson River Park Trust, which is building and operates the 4.5-mile-long waterfront park from Chambers St. to 59th St.

“Partnering with the Whitney to bring ‘Day’s End’ to life within the Hudson River Park is a great honor and privilege,” said Noreen Doyle, the Trust’s acting president. “‘Day’s End’ connects multiple layers of the site’s physical and social history while simultaneously enriching the park at Gansevoort Peninsula and nearby.”

An opening ceremony for “Day’s End” will be held under a tent on the peninsula on Mon., May 17. When asked about the attendees, Weinberg didn’t drop any names, but said they will range from artists to community board members and more.

The artwork’s ghostly steel frame is not temporary but there for the long term.

“He said to me, he guaranteed at least 100 years,” Weinberg said.

Turning the clock backward instead of forward, Weinberg personally is awed by all the history of the site. He noted it was an indigenous Lenape village, the location of the early-1800s Fort Gansevoort, the place where Herman Melville — the grandson of the Revolutionary War colonel who was the peninsula’s namesake — toiled as a customs inspector and the home of a famed outdoor market.

In addition to the installation of “Day’s End,” there’s currently more history being made in the area.

Just to the north of Gansevoort, Barry Diller’s Pier 55 a.k.a. “Little Island” is set to open soon, reportedly next month. The “arts island,” sporting an undulating pier deck lushly landscaped with grass, flowers and trees, will feature live performances.

In the next couple of years, Gansevoort Peninsula itself will be transformed into a park, including the aforementioned beach, and Pier 57, at W. 16th St., will open as a public-use pier that will also house Google offices.