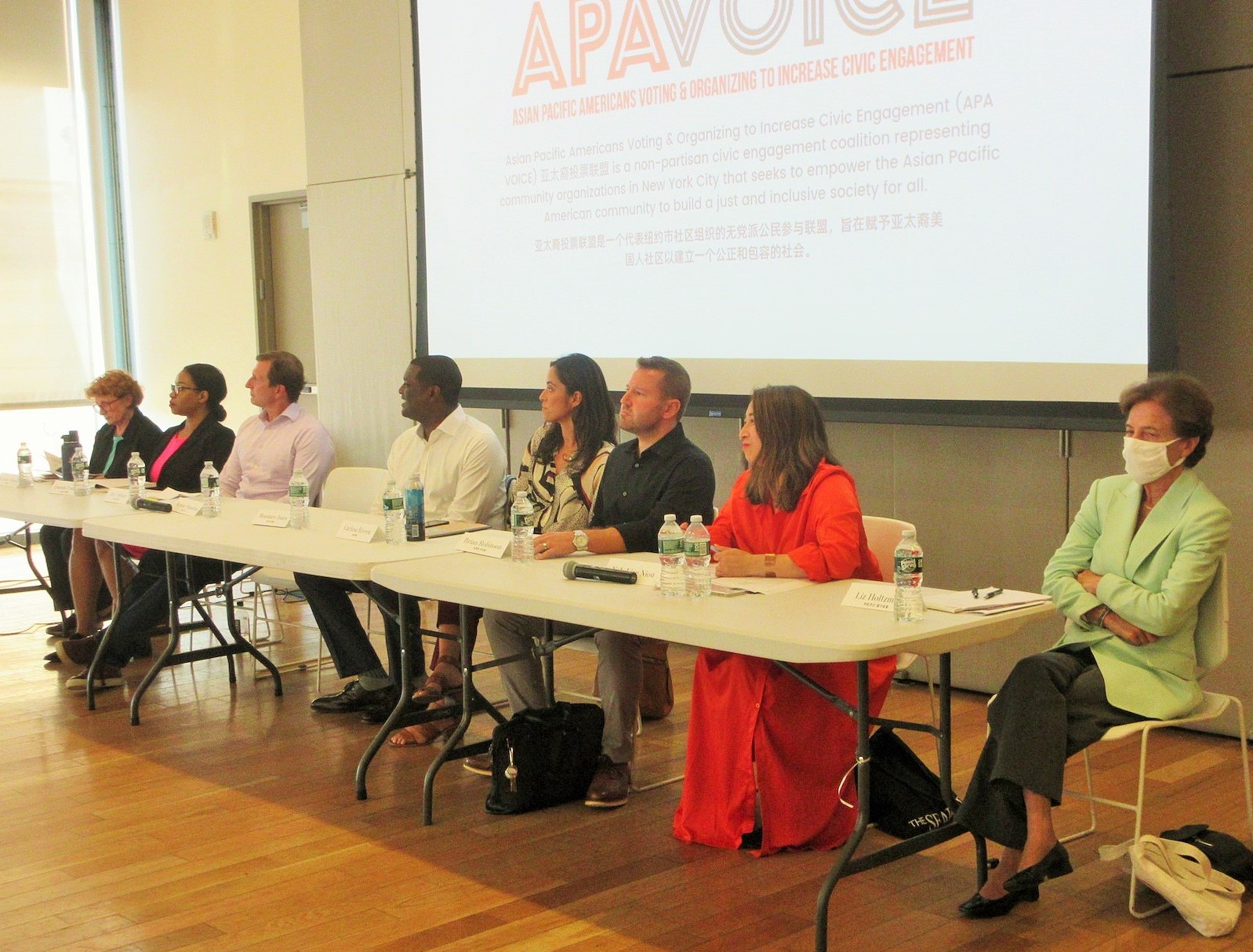 Eight of the candidates in the crowded District 10 race participated in the forum. (Photo by Dashiell Allen)

BY DASHIELL ALLEN | Dan Goldman faced tough questioning from several of his opponents vying to represent the 10th Congressional District at a candidate forum Monday held by APA Voice, a coalition of Asian-American organizations from across New York City.

Goldman, the former lead prosecutor in the first impeachment trial against Donald Trump, was asked by current Westchester Congressmember Mondaire Jones why he opposes expanding the Supreme Court, despite declaring the U.S.’s democracy is in a “five-alarm fire.”

Goldman has made preserving democracy a central tenet of his campaign, stating twice during the forum, “Donald Trump will run again in 2024.”

“That’s like being in the middle of a fire and saying we’re not gonna put out this fire because at some point in the future someone might light a match,” Jones said of Goldman’s stance on SCOTUS.

Goldman, the only candidate to oppose expanding the court, said he believes that to “pack the court” would be “antidemocratic.”

“I believe that we need to live by the same rules that we are preaching,” he said.

Jones also asked him, to audience applause, “Why does your financial disclosure state that you are invested in Fox News, the greatest disinformation machine in this country?”

In response, Goldman stated, “I don’t manage my money, my broker does… . So I have a ton of stocks.”

An heir to the Levi Strauss fortune with reported personal wealth of from $64 million to $235 million, Goldman added that, if elected, he would put his money in a blind trust and would advocate to ban stock trading by members of Congress.

“I’ve thought about it a lot,” he answered, noting his work alongside Michelle Alexander, author of “The New Jim Crow: Mass Incarceration in the Age of Colorblindness.”

Later, when asked whether he believes that campaign finance laws should be reformed (something all candidates agreed should be done), Goldman stated, “There’s way too much special interest in the political system.” (As The New York Post has reported Goldman recently poured $1 million of his own fortune on his campaign).

Goldman wasn’t the only candidate in the hot seat. Liz Holtzman, a former congressmember and New York City comptroller, was questioned by two of her fellow candidates, Assemblymember Jo Anne Simon and businesswoman Quanda Francis, for her position as the only candidate opposing term limits on the Supreme Court.

“I don’t think it’s constitutional,” she responded, despite agreeing with the idea’s “objectives.” Instead, she supports investigating conservative Associate Justices Brett Kavanaugh and Clarence Thomas.

“It’s possible that they will find a basis that will make it impossible for them to stay on the court,” she said.

Other issues discussed at the forum moderated by journalist Ernabel Demillo included addressing the rise in anti-Asian violence, child poverty (all candidates agreed that child tax credits should be extended at the federal level), climate change and housing.

Jones mentioned that infrastructure spending should be prioritized for “environmental justice communities,” such as the Lower East Side, Sunset Park and Red Hook.

Rivera noted that 44 people in the city died during Hurricane Sandy, adding.

“We have to invest in social, resilient infrastructure,” she stressed. “We have talent and organizations in this city that have a vision for what we should see on our coastlines.” She did not, however, explicitly mention the contentious East Side Coastal Resiliency plan.

Brian Robinson, an author and business owner, noted that he’s involved in an effort to block a resiliency project in Battery Park City’s Wagner Park, stating, “The science and justification of closing [the park] really doesn’t add up.” (The Battery Park City Authority disputes that critique, however.)

Goldman, meanwhile, described environmental justice as a “democracy issue” because, as he sees it, communities do not have enough of a say in addressing resiliency measures. He cited East River Park and the E.S.C.R. project as a prime example.

“We have to make sure that the communities that those parks and coastal ways serve are not displaced,” he said.

The candidates were also asked whether they support the Two Bridges Community Plan, a rezoning proposal that would increase affordability and cap the height of new development in the Lower East Side neighborhood where four new megatowers are in the initial stages of construction.

While none stated explicit opposition, many of the candidates did not appear familiar with the plan, which is actually a subset of the larger Chinatown Working Group Plan.

“I really want to read those documents a little more carefully” said Simon, adding that she won’t be “duped” by “faux affordability.” Simon has previously told The Village Sun that she supports the full Chinatown Working Group plan.

“I am supportive of the Chinatown Working Group plan for making sure that we have proper zoning for our area,” Niou stated.

Much of APA Voice’s forum can be viewed on the group’s Instagram account. Responses to a survey filled out by the candidates are also available.

The Democratic primary for Congress is on Aug. 23, with early voting starting on Sat., Aug. 13. The 10th District includes all of Manhattan below 14th Street, plus Brownstone Brooklyn neighborhoods like Park Slope and Carroll Gardens, along with Borough Park, Gowanus, Sunset Park and Red Hook.