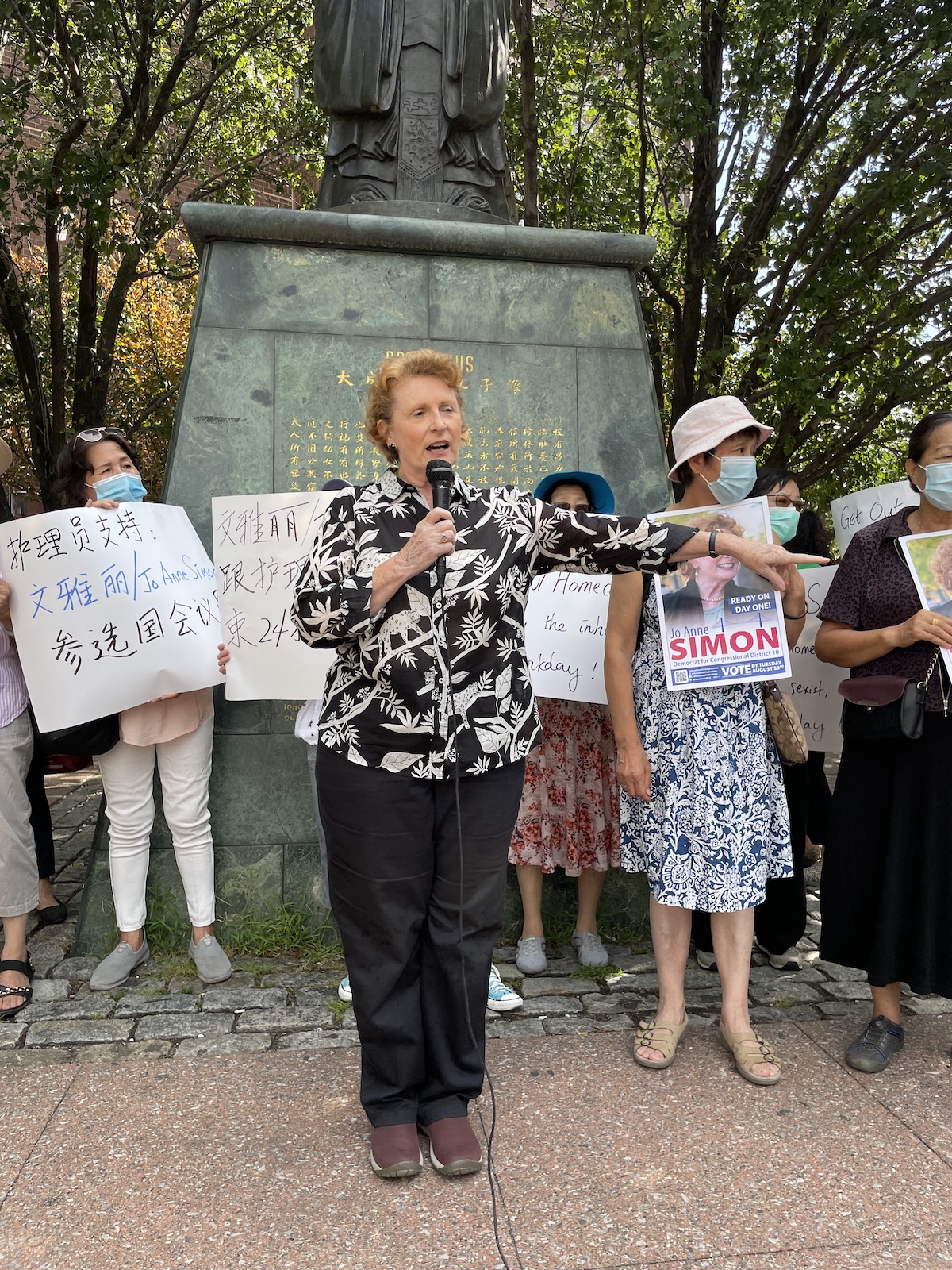 Jo Anne Simon speaking at Confucius Plaza on Monday when she was endorsed by home healthcare attendants and Chinatown activists. (Photo by Dashiell Allen)

BY DASHIELL ALLEN | Assemblymember Jo Anne Simon from Brooklyn has been picking up local support in her bid for Congress in the newly drawn 10th District.

Monday morning she was endorsed by 24-hour homecare attendants and Chinatown activists from the group Women Against Racist Violence, who braved the summer heat to gather in front of Confucius Plaza to enthusiastically make the announcement.

“Jo Anne is not afraid to publicly condemn the 24-hour workday,” activist Jihye Song said. “She’s not afraid to stand up against Cuomo’s racist, sexist [Department of Labor] regulations and publicly testify against them. And she is the only candidate who has consistently stood with home attendants, with immigrants and with working people of color.”

The home attendants and activists are part of the Ain’t I A Woman!? Campaign, which for the past several years has worked to end the practice of 24-hour homecare shifts, for which under state law workers are only compensated 13. They advocate for creating two 12-hour split shifts.

“For a long time, 24 hours damaged my sleep,” said Yun Fang Chen, a Chinese home attendant. “Now, even if I don’t work, I can’t sleep, because when I’m at work, the patient has a bell. And whenever the patient rings the bell, I have to go there, and my arm has also been damaged.

“I’m very glad that today Jo Anne Simon, the congressional candidate, can stand with us and advocate for us,” Chen said. “This is very important to us homecare workers.”

“I cannot sleep much on the job,” said Yolanda Menchala, another health worker and Simon supporter. “I cannot eat on the job. My health is deteriorating. My hip hurts. My back hurts. I can’t go down a flight of stairs. I suffer from depression.”

Emily Hellstrom, a Soho activist who has also been active in fighting for environmental protections at the toxic 250 Water St. development site, came out to support Simon on behalf of the Downtown Independent Democrats club, which has also endorsed her.

“Importantly, Jo Anne is not afraid to go it alone on issues she knows are at the core of progressive values,” Hellstrom said, noting that she’s known the candidate for many years as an education advocate. (Simon was previously a teacher for deaf students and a disability civil-rights lawyer).

Simon is counting on her support for community issues to bring her traction in the competitive congressional field.

“It really doesn’t matter whether it’s a federal issue in their minds or not,” she said. “People vote for people that they trust will be there for them, and that is what I have a history of.”

In her own district, starting back in the 1990s as president of the Boerum Hill Association, Simon successfully advocated for a community-supported plan to redevelop 6.5 acres of parking lots in Downtown Brooklyn to provide 37.5 percent affordable housing.

“The fact that nobody is fighting about it is the most important thing,” she noted.

Simon also has been endorsed by Assemblymember Deborah Glick, who represents parts of Tribeca, Soho and Greenwich Village.

Simon has consistently polled in the upper single digits in the race, getting 8 percent of support in a poll conducted by the Working Families Party — which has endorsed Yuh-Line Niou — and 7 percent in an internal poll from Dan Goldman’s campaign.

Many of the home attendants supporting Simon also held a protest against another candidate, Yuh-Line Niou, the Lower Manhattan assemblymember, calling her a “fake progressive” for her past support of Chinatown business owners accused of wage theft.

“Yuh-Line has always stood with workers — on the picket lines, in the Legislature, and now as a candidate for Congress,” her campaign told The New York Post in a statement, adding that she’s been “a leading voice since 2017 for the end of the 24-hour workday.”

The Democratic primary for Congress is on Aug. 23, with early voting starting on Aug. 13. The 10th District includes all of Manhattan below 14th Street, plus Brownstone Brooklyn neighborhoods like Park Slope and Carroll Gardens, along with Borough Park, Gowanus, Sunset Park and Red Hook.