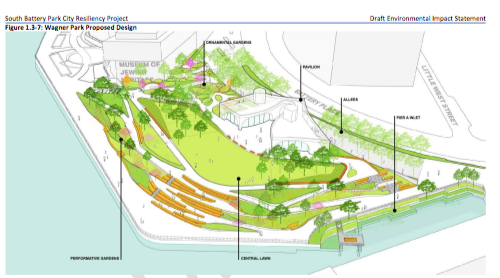 The design for Wagner Park, as presented in the project's draft enviromental impact statement, or D.E.I.S.

BY GRACE SYMES | As part of the South Battery Park City Resiliency Plan, the Battery Park City Authority is planning to raise Wagner Park more than 10 feet to protect against future storm surge and sea-level rise. With construction on the park set to begin after Labor Day, Democratic District Leader Vittoria Fariello and Assemblymember Charles D. Fall and two local community groups are asking B.P.C.A. to pause and reconsider its plans.

The request for a pause comes after years of dispute over the plan for Wagner Park and multiple resolutions and letters from Community Board 1, which covers Lower Manhattan up to Canal Street, requesting more community outreach and clarification about the plan. A Change.org petition supporting the pause had also garnered 700 signatures as of June 17.

“Most of the community does not know about this. There’s been no community outreach,” said Britni Erez, a member of the Battery Park City Neighborhood Association, which supports the pause. “If you’re planning for 100 years, take a few months and get it right.”

The initial plan for Wagner Park was presented in 2016, and members of community groups argue that the concerns they brought up then still haven’t been addressed.

“This can start as soon as they give us the information,” said Pamit Surana, another B.P.C.N.A. member. “They’re refusing and stalling on providing information that is now five years old.”

According to B.P.C.A.’s draft environmental impact statement, or D.E.I.S., Wagner Park will be raised 10 to 12 feet, to a height of 19.8 feet, and a buried floodwall will be installed under the new park. The current Wagner Park pavilion will be torn down and a new pavilion with a similar footprint will be built in its place, with a restaurant, maintenance and storage space, public bathrooms, a community/educational center and a green roof.

Construction is set to begin after Labor Day and last two years, closing all of Wagner Park for the duration. Under this plan, according to the D.E.I.S., views of the waterfront will be maintained and residents will be able to enjoy the new park without having an exposed floodwall bisecting it.

“Through years of meaningful community input, we have developed designs for a resiliency project that not only protects Battery Park City and our portion of Lower Manhattan [from] more frequent and more severe storms, but also that enhances our treasured parks and public spaces,” said B.P.C.A. spokesperson Nick Sbordone in a statement to The Village Sun.

Predictions from the city’s 2019 Lower Manhattan Climate Resilience study indicate that in 2100, storm surge could reach heights of 9 to 16 feet and sea levels could rise up to 6 feet. Without resiliency measures, the study predicts that by 2100, almost 50 percent of buildings in Lower Manhattan would be at risk from storm surge.

“If you accept that a 10-foot elevation level increase is required, there are only so many ways to accomplish that,” said Jeff Galloway, a member of the C.B. 1 Battery Park City and Environmental Protection committees, who supports the plan. “The plan that’s proposed does it, I think, in the least disruptive way possible.”

The scheme for Wagner Park is part of B.P.C.A.’s $221 million South Battery Park City Resiliency Project, which would install floodwalls and flip-up, deployable flood barriers stretching from the Museum of Jewish Heritage through Wagner Park and Pier A Plaza and along the north side of the Battery bikeway to the intersection of Battery Place and State Street, and would require cutting down 114 trees. A total of 224 trees would then be planted after the construction, according to the D.E.I.S. 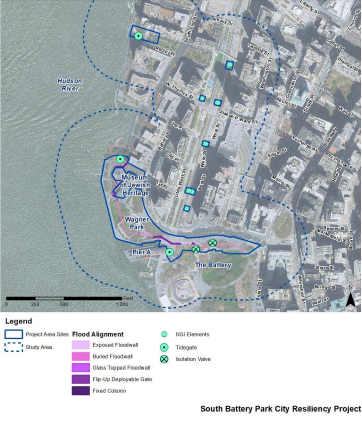 This plan is intended to work in conjunction with the city’s Lower Manhattan Coastal Resiliency plan to protect all of Lower Manhattan from flooding and sea-level rise in the coming decades.

Virtually everyone who questions the current plan initially emphasizes that they support resiliency work. But at C.B. 1 meetings and in a June 15 meeting with B.P.C.A. board members organized by District 1 Councilmember Christopher Marte, community members have repeatedly questioned the plan’s necessity and pointed out that Wagner Park didn’t flood during Hurricane Sandy.

Dr. Klejda Bega, a Battery Park City resident and science lecturer at Columbia University who wants the project to be paused, said that Hurricane Sandy is one of the only real data points — not a predictive model — available when it comes to flooding in Lower Manhattan.

“As a scientist, I care very much about data and facts,” Bega said. “If Battery Park City Authority is serious in their professed urgency regarding resiliency, then they should have a coordinated plan with all of Manhattan to address the low pinch points, the ones that Sandy showed us, instead of high points — like Wagner Park, which didn’t even flood.”

She called on B.P.C.A. to release the data and models used to justify the Wagner Park plan and added that she didn’t think B.P.C.A. had done sufficient community outreach.

“I certainly was never asked,” Bega said. “I don’t feel like I’m represented anywhere. And that’s a problem.”

Some Battery Park City residents still have questions about exactly how the project will be funded and why B.P.C.A. didn’t apply for federal funding. Others want more green space in the post-construction park, or for B.P.C.A. to find a resiliency strategy that doesn’t close the park.

B.P.C.A. board members have said in meetings that the Wagner Park plan has changed substantially since 2016, in part due to community feedback, and that the authority has worked with C.B. 1 and residents to develop the current plan.

In a June letter to C.B. 1, B.P.C.A. President / C.E.O. B.J. Jones said that B.P.C.A. had recently posted signs in Wagner Park and in Battery Park City building lobbies informing residents about the plan for Wagner Park and promised that a community liaison would be assigned to the project.

“The South Battery Park City Resiliency Project is better as a result of the community feedback that’s been incorporated throughout the process,” Sbordone’s statement also said.

B.P.C.A. members have also emphasized that the next “superstorm” won’t be exactly the same as Sandy, and that while no one wants Wagner Park closed, raising the green space is a necessary part of the plan to protect Lower Manhattan.

Some residents say that while the Wagner Park plan isn’t perfect, there have been plenty of opportunities for community input, and that pausing the plan now makes no sense.

“At the end of the six-year process, the community has been listened to, those who chose to be active in the process,” said Betty Kay, a Battery Park City resident and chair of the C.B. 1 Transportation Committee. “What happens when four or five years from now another group comes forward and says, ‘Wait a minute, let’s stop the plan because you didn’t listen to me’? I mean, that’s a never-ending cycle.”

C.B. 1 member Galloway said the concerns being aired now have already been brought up and thoroughly considered over the last five years.

On June 14, the B.P.C.N.A. sent B.P.C.A. a letter reiterating its request for a pause on the Wagner Park project, calling meetings with B.P.C.A. “predominantly one-way dialogues presenting a summary of top-down decisions to a small segment of the community,” and asking for further data and design specifics.

The renewed backlash against the Wagner Park plan comes as community groups are also pushing for resident representation on the B.P.C.A. board of directors.

Senate bill S9031A, which would require that a majority of the members of the Battery Park City Authority’s board of directors be primary residents of Battery Park City, is currently awaiting Governor Hochul’s signature.

In May, the Battery Alliance, the Battery Park City Homeowners’ Coalition and B.P.C.N.A. voted no confidence with B.P.C.A. and called for the replacement of the authority’s board members and senior executives and a pause on all major decisions, including on resiliency.

“I’m the board president of my condominium. Not once when the planning of this project was occurring was my building approached for feedback,” said Daniel Akkerman, president of the Battery Alliance, an organization supporting affordable homeownership in Battery Park City. “This is a reoccurring theme with the authority, its lack of community input.”

B.P.C.A. is also currently requesting feedback on its $631 million North/West Resiliency Project, which is planned to span from First Place northward to the Battery Park City esplanade, to the east side of West Street/Route 9A and ending above Chambers Street. B.P.C.A. is holding an open house for the project on Wed., June 29.