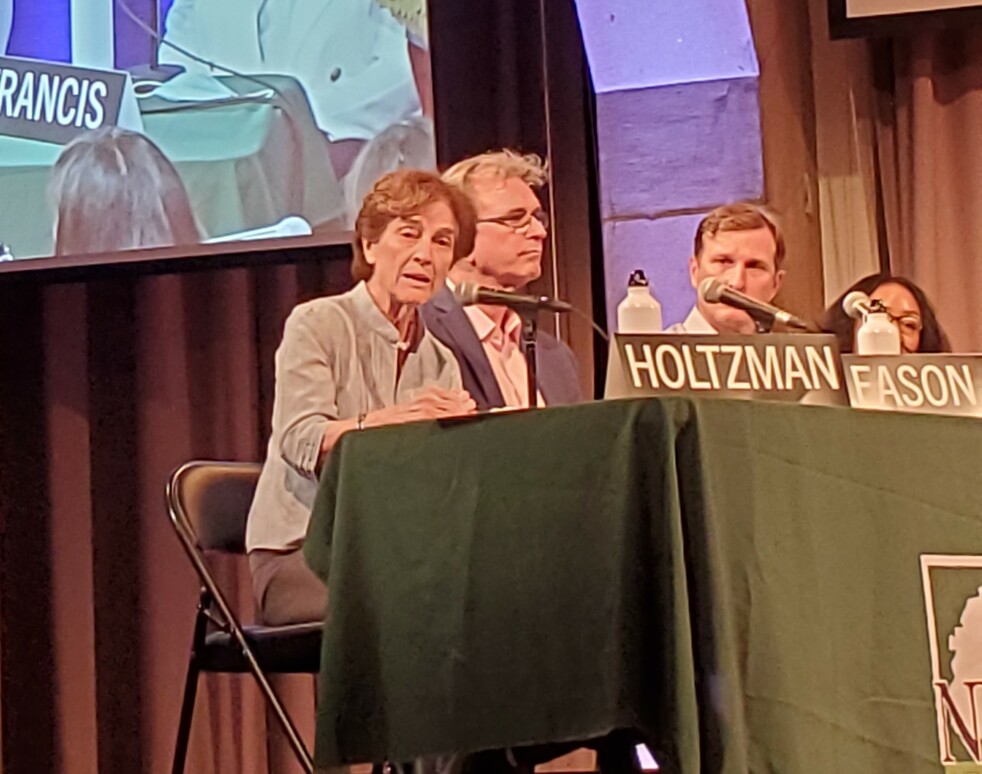 Elizabeth Holtzman speaking at The Cooper Union's Great Hall at a recent environmental forum for District 10 candidates. (Photo by The Village Sun)

BY THE VILLAGE SUN | Showing that the 10th Congressional District primary election is anyone’s call, the Daily News on Sunday endorsed Elizabeth Holtzman.

The newspaper’s editorial board dubbed Holtzman, “the class of the large field.”

Turning 81 this week, Holtzman was first elected to Congress 50 years ago. She also served as Brooklyn district attorney and New York City comptroller.

Although there are calls within his own party for another octogenarian politician, Joe Biden, to step down after this term, the News said Holtzman “is every bit as plugged in and energetic as her competitors, amplifying her breadth of experience and in-depth knowledge of both national and local issues. In fact,” the editorial states, “it’s apparent her age has given her a sense of urgency to do big things for her constituents and her country.”

The tabloid daily paper noted that most of the candidates in the 10th District contest are “solidly progressive Democrats” who support abortion, stronger gun control, taxing the rich and corporations and safeguarding American democracy, expanding the U.S. Supreme Court and combating climate change.

The deciding factor for the News was Holtzman’s “experience in checking the abuses of presidents going back to Nixon.” The paper’s editorial warns that, in that same vein, now is a very critical period in which Donald Trump “may be laying the groundwork to seize power no matter who the voters choose.”

Candidate Dan Goldman, who was the lead majority counsel for Trump’s first impeachment, “gets a check” for that work, the News granted, yet sniffed that the first-time candidate “lacks Holtzman’s granular understanding of a broad range of other challenges.”