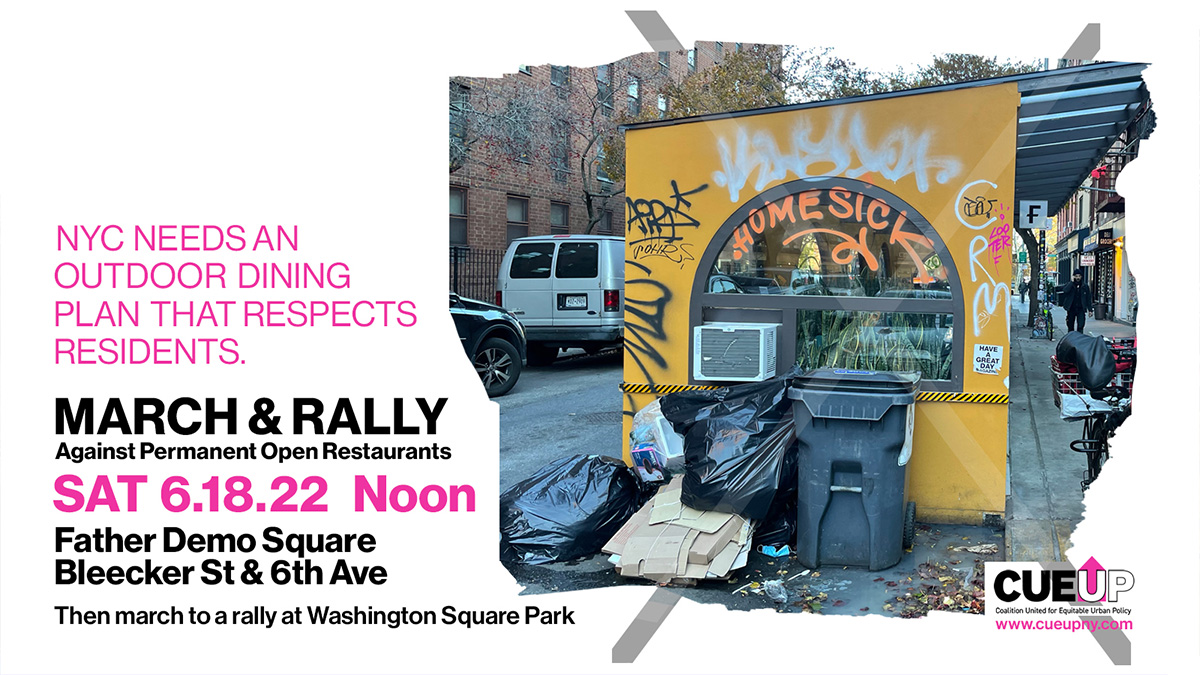 BY LINCOLN ANDERSON | Dining shed foes are on the march once again.

On Sat., June 18, they’ll be wending their way through Greenwich Village’s “dining shed-clogged streets,” as they put it, to “loudly remind” Mayor Adams about the negative impacts of the Open Restaurants program, and to demand “a community-based plan” for the proposed permanent program.

Shed haters rejoiced when they prevailed in State Supreme Court in March. Justice Frank Nervo ruled an environmental impact study, or E.I.S., is needed for the city’s 12,000 outdoor dining sheds — about 3,200, or one-quarter, of which are squeezed into Council Districts 1, 2 and 3, which include all of Downtown and Lower Manhattan, plus Chelsea and Hell’s Kitchen.

Three months after the stunning court ruling, however, to local residents’ chagrin, the contentious street structures remain in place.

Challenging Nervo’s ruling, City Hall is now dragging out what the opponents call a “fruitless appeal process” that will take at least eight months — only after which a proper E.I.S. can then start.

The June 18 march is being organized by CUEUP (Coalition United for Equitable Urban Policy) and will kick off at noon at Father Demo Square, at Bleecker Street and Sixth Avenue, and end in a rally at the arch in Washington Square Park.

CUEUP notes there has been a “1,000 percent increase” in outdoor dining sites during the past two years. This has resulted, they charge, in an accompanying increase in noise and other negative effects, plus, in some cases, has dangerously blocked access for emergency vehicles.

“We live in predominantly residential neighborhoods, and they have value beyond maximizing the rents of commercial properties,” said Melissa Krawitz, a CUEUP member. “Livability matters, too. Those of us who live with the effects of noise, trash, rats and crowded streets and sidewalks know that Open Restaurants is not working for residents. It’s time to adjust the program so that it does.”

“We want a proper E.I.S. — that’s all we’ve ever wanted,” Waldman stressed to The Village Sun. “The city tried to avoid one because they’re afraid it will show that Open Restaurants does have significant negative impacts on neighborhoods. They forced us to sue. We won and the ruling was clear and definitive. Instead of just accepting it, the city is going through a fruitless appeal process that will take up to eight months. When we win the appeal, the E.I.S. will take another six to nine months. That means that Open Restaurants will continue to operate on an emergency order for the next year and a half. That’s on top of the two years that it’s been running on an emergency order.

“The emergency order, of course, is a sham. The emergency has been over for every aspect of city life — including indoor dining — for over a year. Governing by sham emergency orders is what authoritarian governments do. The city has been operating in this undemocratic manner — helped by a silent media and complicit City Council — for two years now. It can’t go on forever.”

Waldman is a member of the Village Independent Democrats political club. Recently, V.I.D. considered voting on a resolution calling for an immediate halt to the Open Restaurants program — right in the peak summer season — in light of Nervo’s ruling. However, some club members, including past president David Siffert, fought off the resolution, saying it was too extreme. Ultimately, the club decided to table the measure.

Before Justice Nervo’s ruling that an E.I.S. is needed, the City Council had been starting to move toward crafting rules for permanent Open Restaurants. However, after the lawsuit ruling, that’s all now on hold.

“Right now everything has been halted because of the lawsuit,” Councilmember Christopher Marte confirmed to The Village Sun.

Similarly, Councilmember Gale Brewer said nothing is going on in the City Council at the committee level on language for a permanent program.

“Open Restaurants, I think that’s on pause,” she said. “I think [it’s] nothing at the moment.”

After Nervo’s ruling, stunned YIMBY (Yes in My Backyard) types, flailing around for public support for the program, pivoted to pointing to “studies” that allegedly show most New Yorkers favor the sweeping street scheme. These advocates, in turn, are the types that like to decry community boards — the majority of which oppose a permanent Open Restaurants program — as being unrepresentative of the opinions of most city residents.

Surprisingly brief, the survey contains around a half-dozen questions, basically asking people to check off what they do and don’t like about Open Restaurants, with an option to write a comment on how the program can be improved.

“It’s a pointless survey,” Maria Paris scoffed. “The survey didn’t even have a category for residents. My response as a resident is treated the same as a respondent who frequents the area.”

The survey includes five categories (below) for respondents.

What is your relationship to Open Restaurants? (Select all that apply)

Specifically, the vague category stating, “I live, work or frequent a neighborhood with [an] open restaurant,” was incredibly galling to the Village resident.

“Three in one category,” Paris fumed, “that really boiled my blood.”

Paris is a professional online survey taker, doing it as a way to earn extra income. She typically does 15 per day.

“It’s not as lucrative as it was in 2006,” she noted. “Online surveys started to expand. More people started taking them.”

She first noticed the D.O.T. poll in mid-November, the month it launched, on Nextdoor, an app where riled-up community residents sound off on local issues.

“This was the most unprofessional survey I’ve seen for such an important issue in New York City,” she said. “It’s crazy.

More to the point, one can apparently take the survey an infinite number of times — and, as a result, CUEUP members are concerned the “other side” is taking advantage of this glaring “glitch.”

“I pressed it again and it didn’t say, ‘You have already taken the survey,’” an incredulous Paris noted. “I took it twice.”

The survey is apparently still active. The Village Sun on Wednesday filled out — five or six times.

The concern, at least for CUEUP members, is that the poll is being pushed by the New York City Hospitality Alliance to its members — including tens of thousands of restaurant workers — who could very well be filling it out over and over again.

However, as a result of sheer numbers, she said, “It’s going to be a wider distribution to the restaurant alliance versus CUEUP or Nextdoor.”

“They keep saying it’s the vocal minority” that opposes Open Restaurants, she said, indignantly. “We are not the minority — we are just vocal.”