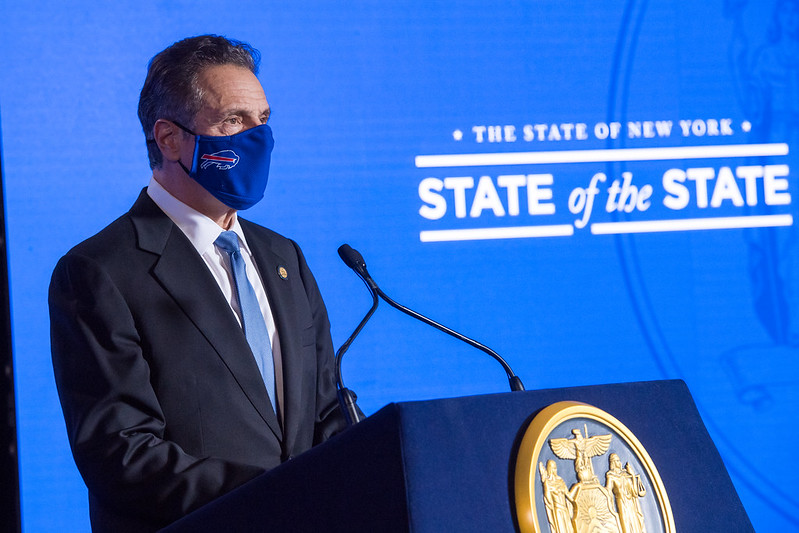 Andrew Cuomo, on Monday, in his 11th address in his State of the State rollout, laid out his reopening agenda. However, he said, he is still not ready to reopen indoor dining in New York City. (Photo by Darren McGee / Office of Governor Cuomo)

BY EVERYNIGHT CHARLEY CRESPO | Governor Cuomo announced on Mon., Jan. 25, that later in the week he would loosen some COVID restrictions, noting that the state is at the end of its “post-holiday spike.”

The governor, speaking at a press briefing at the Roswell Park Cancer Institute in Buffalo, offered few specifics, though. He said the state Department of Health is currently finalizing plans, with an announcement in the days ahead.

The changes could begin as early as later this week, now that the state’s positivity rate dropped from 7.94 percent a week ago to 5.47 percent, and a rate of transmission below 1.0 percent for the first time since the winter surge. Health experts project the state’s infection rate will continue to decline.

Cuomo said New York will “start making adjustments” to restrictions, such as allowing elective surgeries in Upstate Erie County. Designated “micro-cluster zones” throughout the state — which he hit with additional restrictions in recent weeks as the virus made localized resurgences — also may see relaxed regulations.

“We’re at a new place now, and we can start to adjust that valve and start to open up more economic activity and reduce some of the restrictions,” Cuomo said.

Still no to indoor dining in New York City

The one statement Cuomo made clear was his reiteration that he is not yet ready to permit indoor dining in New York City.

After seven months of restaurant closures in New York City, Cuomo permitted indoor dining at 25 percent capacity in mid-October as citywide infection rates declined. He reenforced the total ban in December, though, when the local infection rate spiked. Since then, neighboring areas have begun allowing indoor dining.

Philadelphia reopened for indoor dining last weekend, and much of New York state currently allows 50 percent capacity. Restaurants in New York City are limited to serving outdoor diners and takeout customers, and only until 10 p.m. Many restaurants have closed permanently and many restaurateurs fear they may not be able to survive the pandemic if they cannot return soon to what used to be business as usual.

Cuomo offered no projection as to when the current mandate would change.

Earlier on the same day, the New York State Restaurant Association challenged Cuomo to loosen restrictions on restaurants. The NYSRA asked the state to allow indoor dining in the city and to push the 10 p.m. curfew up to midnight.

“We all know about the dire financial crisis facing the restaurant industry, and we all agree that we need to reopen the economy or there will be nothing left to reopen,” said Melissa Fleischut, NYSRA president and C.EO. “We’re urging the state to take some small steps in that direction. Any help will go a long way toward the long-term survival of so many of our favorite restaurants.”

Coincidentally, NYC Restaurant Week began in New York on the day before Cuomo’s press briefing. Reimagined as NYC Restaurant Week To Go this time due to the closures, customers can order takeout or delivery lunch or dinner from more than 500 participating restaurants for $20.21. This round of the twice-yearly event runs from Jan. 25 to Jan. 31.

Local musicians who depended on the restaurants for work are among the many affected by the ongoing winter restrictions. Most restaurants who provided incidental music for diners in October found it impossible to continue doing so amid the harsher weather and earlier curfew. In a city that a year ago hosted more than 100 stages for musicians every night, the available venues are now but a few.