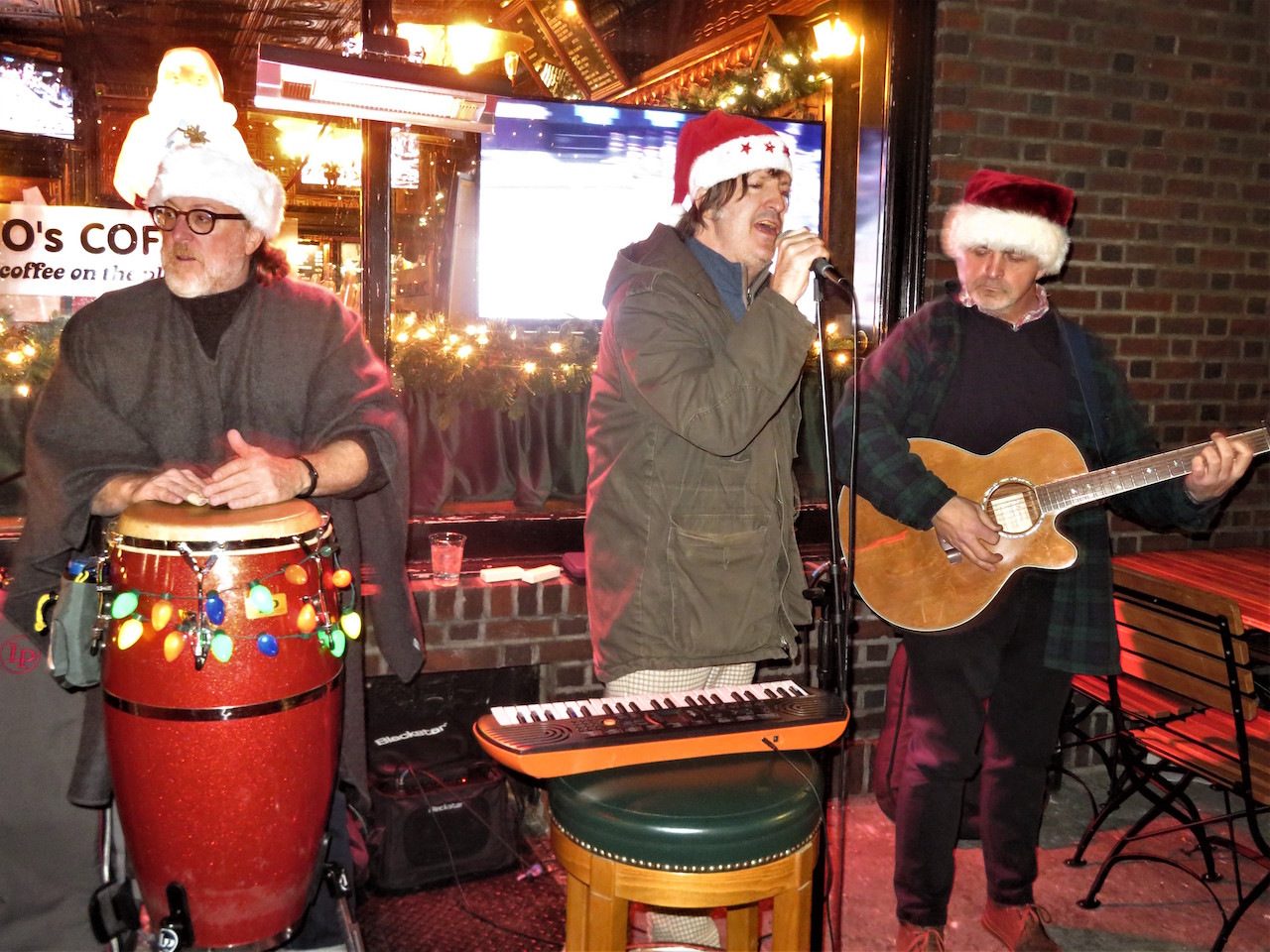 Chris Campion and his band performed outside the Corner Bistro on Dec. 22 to an audience seated in a semi-enclosure on the street. (Photo by Everynight Charley Crespo)

COVID relief bill could help ‘Save Our Stages’

In a video statement the following night, Trump said he would not sign the coronavirus relief bill unless amendments were made to the overall bill. Specifically, he asked that the direct stimulus payment to Americans be increased from $600 to $2,000. The president’s requested amendments do not seem to jeopardize the Save Our Stages portion of the bill.

The president did not threaten a veto explicitly. The 5,593-page stimulus bill passed with overwhelming margins in both houses of Congress, assuring veto-proof majorities. The deadline for President’s Trump’s signature is Mon., Dec. 28.

The Save Our Stages Act portion of the bill would provide financial assistance to independent venues and promoters by providing a grant equal to 45 percent of gross revenue from 2019, with a cap of $10 million per applicant. This grant funding is intended to help recipients stay alive until a post-COVID reopening. The recipients can use the funds toward payroll and benefits, rent and mortgage, utilities, insurance, personal protective equipment (PPE) and other ordinary and necessary business expenses.

The Save Our Stages Act was sponsored by Senators John Cornyn (R-TX) and Amy Klobuchar (D-MN) in the Senate and Congressmembers Peter Welch (D-VT) and Roger Williams (R-TX) in the House. Senate Minority Leader Chuck Schumer (D-NY) championed the bill. The bill had 230 bipartisan congressional cosponsors.

“We secured the Save Our Stages Act for indie music venues, Broadway, comedy clubs, indie movie theaters and more,” Schumer posted on Twitter on Dec. 20. “These are people’s jobs and livelihoods, and they need this help now. I won’t stop fighting for them.”

The passage of the Save Our Stages Act succeeded largely through the efforts of a grassroots movement with no lobbying experience. An ad-hoc group calling itself the National Independent Venue Association, or NIVA, formed at the onset of the COVID-19 shutdown and now represents more than 3,000 independent venues and promoters in all 50 states and Washington, D.C.

The NIVA campaign alerted politicians and the public, including live-entertainment workers and fans, that venues having no revenue and facing enormous overhead due to the COVID shutdown could potentially lead to the venues shutting permanently. Entertainment workers and fans sent 2.1 million e-mails to their elected officials expressing their support for the Save Our Stages Act. More than 1,200 artists signed letters to Congress, amplified the message on their social-media accounts, and donated proceeds from livestreams and merchandise sales. All 535 congressional representatives heard from their constituents through NIVA’s organizing efforts at SaveOurStages.com.

NIVA hopes to work with the federal government’s Small Business Administration to ensure the emergency relief is dispersed as Congress intended. NIVA would help keep an eye on the process, so that only those organizations fitting the description in the law are funded and there is no fraud, and so that the process is implemented as quickly as possible.

The New York Independent Venue Association, or NYIVA, is NIVA’s local affiliate. NYIVA is petitioning New York State and Governor Cuomo, in particular, for additional funding through the CARES Act. The local group states that more than $1 billion of the $5 billion issued to New York State via the CARES Act in March has not been spent and must be spent by Dec. 31. NYIVA’s letter-writing campaign implores the state government to earmark 1.5 percent ($75 million) of the budget to save New York’s music and comedy clubs.

The organization claims that without this funding, “Sixty-five percent of all comedy and independent venues in New York cannot sustain their businesses until February and will permanently shutter, even with the eviction moratoriums in place.”

Indeed, nearly all of New York’s established music venues, from the giant Madison Square Garden to the pint-sized Bitter End, have been closed since mid-March, with no reopening date is in sight. A select few of the venerable music clubs, including City Winery and the Blue Note, reopened in October when 25 percent indoor capacity was allowed, but closed again six weeks later when indoor dining ended in early December.

A few small venues, including Marshall Stack, Rue-B and the Anyway Café, have remained open since June by having musicians play indoors for an audience seated outdoors. Despite snow and cold weather, several musicians have continued performing in parks and other public spaces.

The Save Our Stages Act and the CARES Act have the potential to sustain the live-music industry so that it can resume from where it was a year ago.

Justin Kantor, the co-chairperson of NYIVA, is the founder of the popular Bleecker St. nightspot Le Poisson Rouge, which has been closed for the past 10 months.

“The passing of Save Our Stages will have an immensely positive impact on the industry and has shown the commitment Senator Schumer and colleagues have for our nation’s venues and our national culture fabric,” Kantor said. “It is still important that Governor Cuomo takes this into consideration, as well. New York venues still need extra support from the state to help with the tremendous financial burden placed on our cherished performance spaces.”

More information on the local campaign can be found at www.nyiva.org.