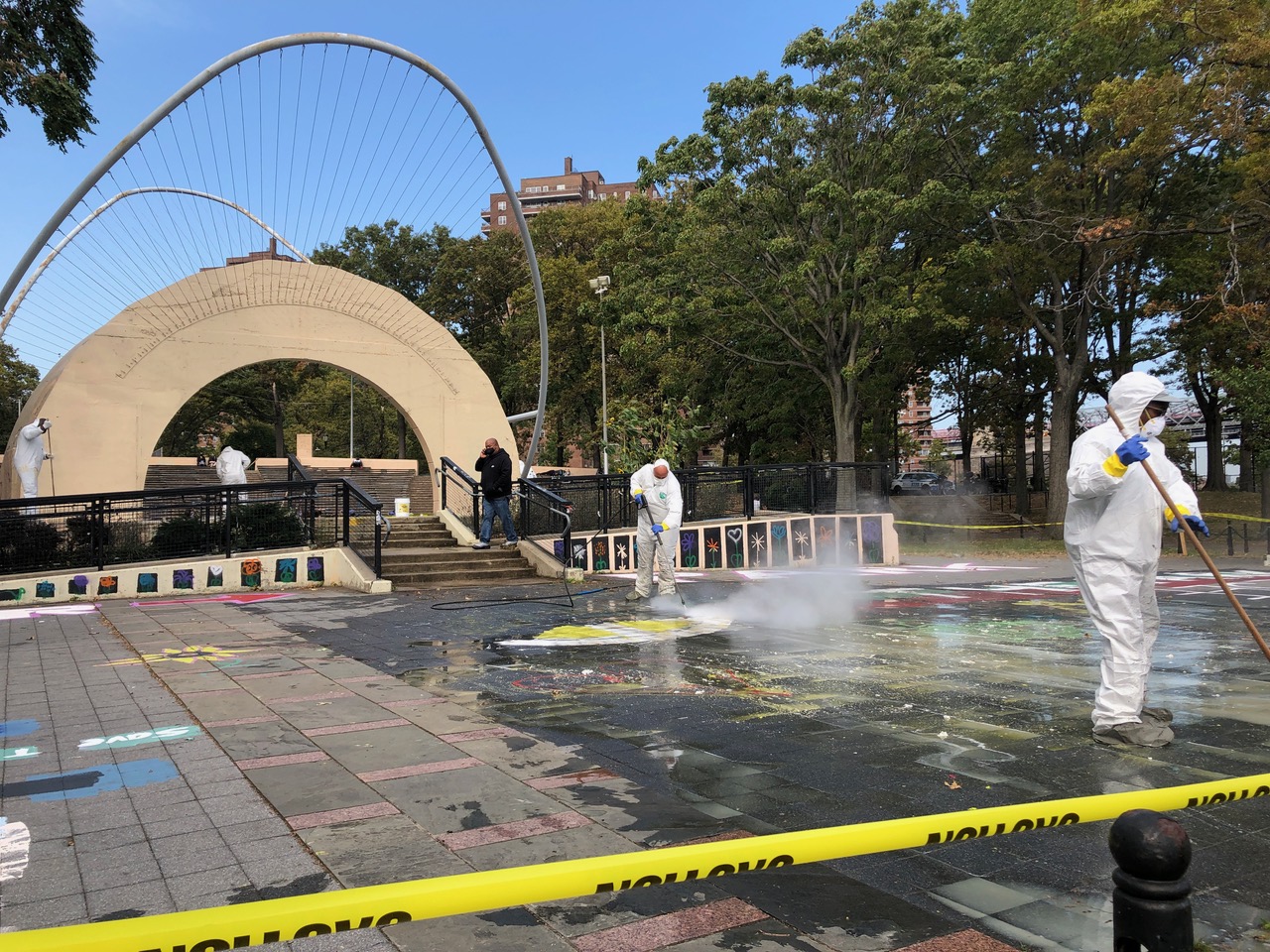 BY THE VILLAGE SUN | Well, that didn’t take long. …

Late Friday afternoon, a crew of artists and graffiti writers unleashed what was dubbed an Art Attack on the East River Park amphitheater, bombing it with an explosion of color, designs and messages. In a mere couple of hours of speed spraying and painting, they had created a veritable mini 5 Pointz.

But on Saturday, the Parks Department fired back with a counterattack, as workers used power-washers and bristle brooms to blast and scrub away all the spontaneous creativity on the amphitheater and the plaza behind it.

Fannie Ip, a member of East River Park ACTION, reported that she biked by the amphitheater at 5:30 p.m. on Saturday and the workers were still hard at work cleaning it.

“I just rode past,” she said. “They’re still power-washing the back. They still have the right side to do. They’re getting overtime to do this.”

The Art Attack was meant to slow down or even block the de Blasio administration’s plan to destroy the entire existing East River Park and raise it 8 feet to protect the park and surrounding area from coastal flooding. The city is reportedly set to close 60 percent of the park next month and commence the hotly debated project, which would clearcut nearly all the park’s 1,000 mature trees.

A community lawsuit was filed against the East Side Coastal Resiliency project, but in August it was shot down by State Supreme Court Justice Melissa Crane.

Back then, Village attorney Arthur Schwartz said the plaintiffs would appeal the ruling.

In the meantime, opponents had hoped that the fresh art on the amphitheater would be protected under the Visual Artists Rights Act of 1990. Under VARA, if a project threatens a piece of public art, the artist must be given a 90-day notice to have a chance to remove it.

In the case of 5 Pointz, the Long Island City factory building-turned-giant graffiti canvas, after it was abruptly demolished six years ago, 21 of the graffiti artists sued and won $6.7 million.

Ian Knife, one of the artists involved in Friday’s amphitheater Art Attack, said they are going to file a lawsuit, too.

“We are going to sue them for not giving us the chance to document after [the paint] drying, as we planned to do, and clean after,” he said. “The park was a canvas to do a piece for documentation and cleaned afterwards, but they destroyed it.”