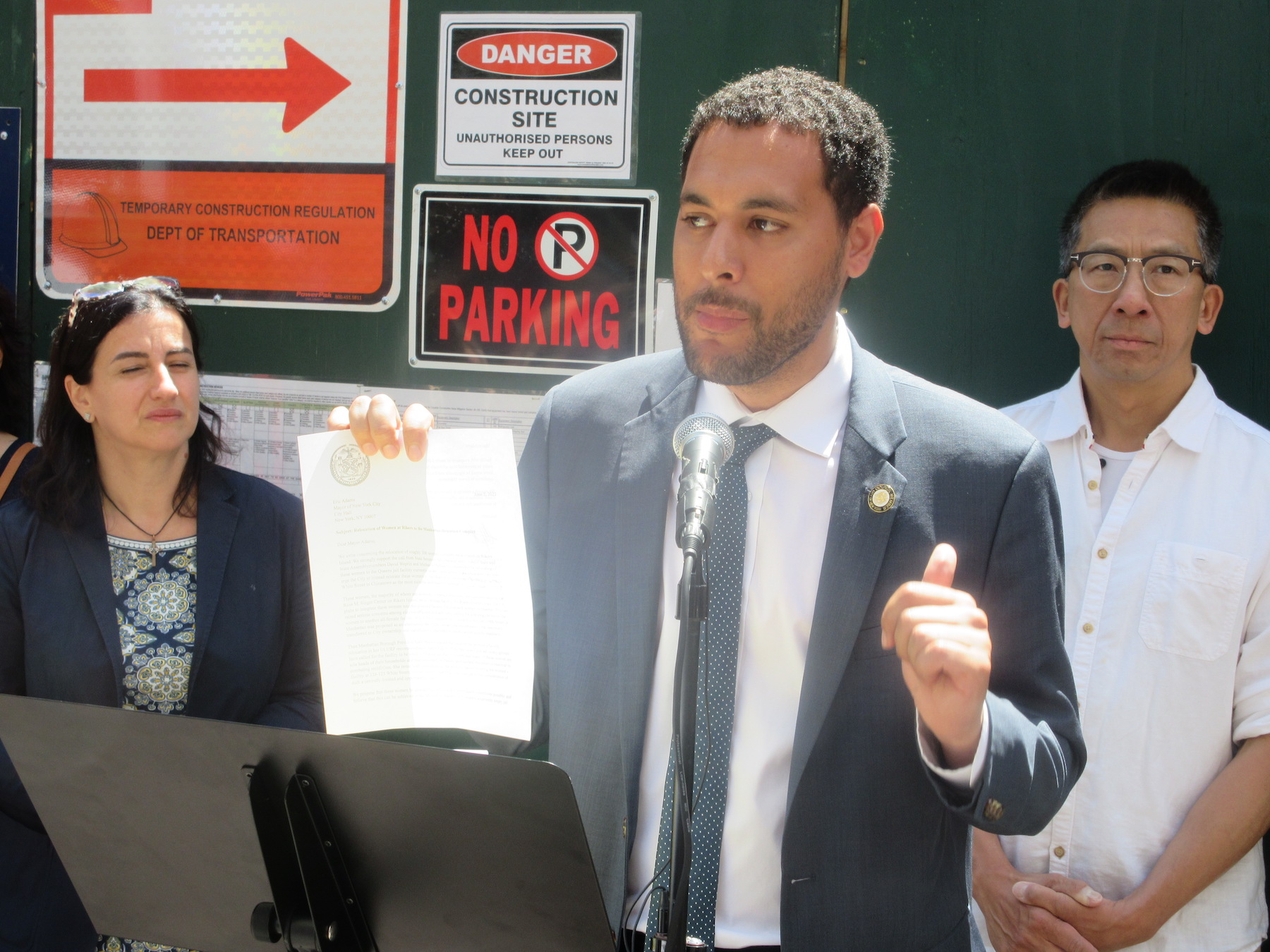 At a recent press conference, Christopher Marte held up his June 2 letter to Mayor Adams asking for female detainees to be moved to the south tower of the now-vacant Manhattan Detention Complex. (Photo by Dashiell Allen)

BY DASHIELL ALLEN | Two concerned councilmembers are calling on the city to move female detainees currently held at a jail facility on Rikers Island to an empty site in Lower Manhattan.

In a June 2 letter, Councilmembers Chirstopher Marte and Lynn Schulman wrote to Mayor Eric Adams requesting the “relocation of roughly 300 women currently incarcerated on Rikers Island” to the south tower of the Manhattan Detention Complex.

Schulman represents a district in Queens that includes the future site of a new borough-based jail. Under the city’s current plan, the new detention center in Kew Gardens, Queens, would be a co-ed facility, opening in 2027.

In their May 10 letter, the lawmakers wrote, “The Borough-Based Jail Plan to relocate these individuals to a Kew Gardens facility, where they would share the same spaces and staff as men, would create the same or worse conditions than at Rikers,” adding that there is a need for “expanded, gender responsive de-incarceration services.”

The idea of relocation for female detainees to the Lincoln Facility isn’t a new one. In fact, it was originally proposed by former Borough President Gale Brewer in 2019. Elizabeth Glazer, the head of former Mayor Bill de Blasio’s Office of Criminal Justice, also proposed rehabing the closed Uptown jail in a September 2021 report.

However, at a recent press conference, Councilmember Marte said he believes it would be possible to fully renovate the southern tower of the M.D.C. in a mere “six to eight months,” using “adaptive reuse” to “create state-of-the-art facilities with all the legal requirements that’s needed to be a functioning jail.”

Criminal-justice advocates have been pushing for a women-only jail for the past several years, due in part to the fact that many female detainees are survivors of sexual assault and harassment.

Last fall, then-Mayor de Blasio moved around 200 women and transgender detainees to a facility Upstate, four miles away from the city, citing staffing shortages and safety concerns as the main reasons. In January, though, they were moved back to Rikers, with many advocates agreeing the transfer did little or nothing to address concerns.

So the question is, if detainees can be brought four hours Upstate, why can’t they be brought a few hours away to north of Central Park or to the M.D.C. in Lower Manhattan?

The Village Sun has reached out to the Mayor’s Office concerning Marte and Schulman’s letter and is awaiting comment.

Alice Blank, an architect and vice chairperson of Community Board 1, added at the press conference that she believes it’s important to preserve the existing M.D.C. building a.k.a. The Tombs.

“This building is part of the criminal courthouse and was deemed to be both an architectural and a historic resource for the state and for the nation, and deemed worth evaluating as a historic landmark by the city’s Landmarks Preservation Commission,” she said. “There is absolutely no need to bring this historic building down.”

Of course, fixing the city’s jail system — deemed by many to be in the state of a humanitarian crisis, with at least six people dying there this year alone — would involve a lot more than simply moving detainees from one facility to another, and the goals of criminal justice can’t be solved by architecture alone.

One potential solution is for the jails on Rikers Island jails to enter into a receivership, which would remove the complex from government control, putting it instead under the oversight of a court-appointed neutral “receiver,” with the potential to fundamentally shift the jail’s culture.

The idea was discussed at length by a recent Columbia University Law School panel, which looked at a case study from a Cook County, Illinois, juvenile detention center.

During the discussion, Stanley Richards, deputy C.E.O. of the Fortune Society, commented, “We don’t want five borough-based Rikers Islands. And if we don’t do the fundamental changes that we need to do, that’s what we’ll have.”