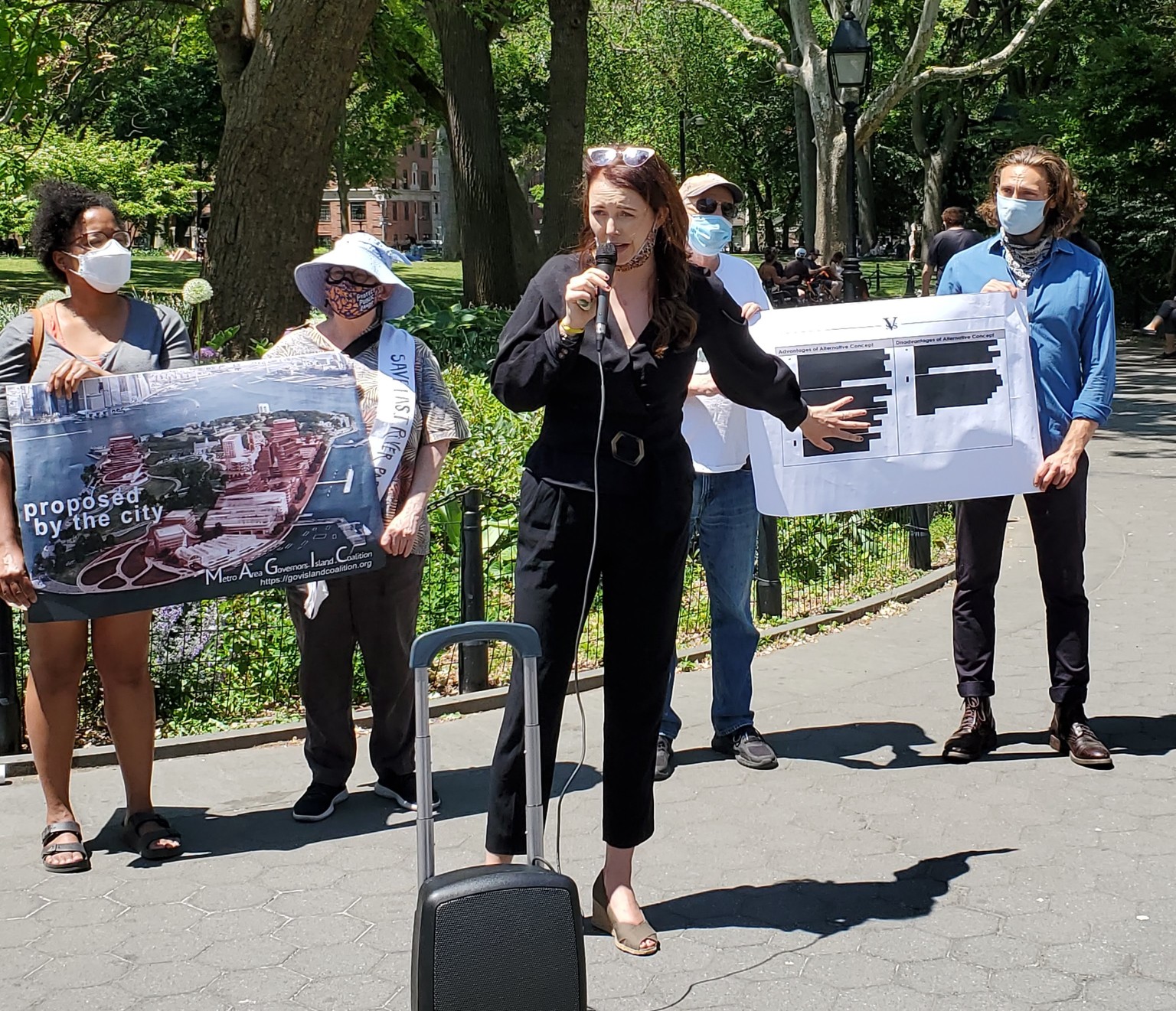 Lindsay Boylan, a borough president candidate, pointed to the heavily redacted "value engineering report" for the East Side Coastal Resiliency plan. After resisting releasing the report, the city coughed up a heavily blacked-out version. (Photo by The Village Sun)

BY THE VILLAGE SUN | Updated May 28, 3:15 p.m.: As opponents decried it as as “sellout,” the City Council on Thursday overwhelmingly voted to approve a rezoning for Governors Island.

The vote was 45 yes, two no and one abstention. The no votes were Brad Lander and Inez Barron and the abstention was Kalman Yeger.

The de Blasio administration says the rezoning would pave the way for construction of a climate-change center on the island off of Lower Manhattan’s tip. But “paving” is exactly what the opponents don’t want more of on the lush green site.

Members of the group M.A.G.I.C. (Metro Area Governors Island Coalition) said, “Today the New York City Council approved an upzoning that will bring in high-density, high-rise development to the south area of Governors Island, which currently serves as a unique green oasis belonging to all New Yorkers.”

The upzoning proposal will next be sent to the mayor for his approval.

City Councilmember Carlina Rivera, who represents District 2, was absent for the May 11 votes on the rezoning by both the Council’s Land Use Committee and Subcommittee on Zoning and Franchises. A staffer did not respond when asked why she was M.I.A. then. But Rivera was there this Thursday to approve the plan at the full Council vote.

Allie Ryan, a co-founder of M.A.G.I.C., is a candidate in the general election for District 2.

“We’re examining our options right now,” she said after the full Council’s vote.

Meanwhile, the Trust for Governors Island, which pushed the rezoning and operates the island, was pleased at the plan’s approval.

“We thank Council Speaker Corey Johnson, Councilmember Margaret Chin and the New York City Council for their thoughtful review and collaboration on this proposal,” said Clare Newman, the president and C.E.O. of the Trust. “The Trust and the City of New York’s vision to establish Governors Island as a leading center for climate education, research and public engagement will place New York City at the forefront of one of the world’s most pressing issues. Today’s vote not only supports that vision, but will allow for expanded public access to the island year-round, investment in its historic buildings, and the long-term funding and preservation of our incredible park, ensuring it will be enjoyed by even more New Yorkers for generations to come.”

In addition to Ryan, several other local candidates oppose the Governors Island rezoning, including Lindsey Boylan, who is running for Manhattan borough president, and Christopher Marte, Jenny Low and Tiffany Winbush, who are all running in the City Council District 1 primary in Lower Manhattan. Ryan said Gigi Li, another District 1 contender, also does not back the scheme.

“Gigi Li had told us privately that she was against it,” she said.

However, Councilmember Chin, Li’s boss, supported the rezoning, which was modified to lower the building heights as it made its way though the City Council approval process.

Nevertheless, the opponents are still against the plan.

“I just don’t think it’s the right vision for the island,” Ryan said. “I think we need park space more than we need another corporate office park.”

According to Ryan, the original plan allowed for buildings up to 30 stories tall, which was reduced to 25 stories, with the final modified version capping heights at a bit more than 20 stories. To be exact, building heights under the plan would range from 125 feet to 225 feet.

Plus, Ryan noted, “Governors Island is in a floodplain,” contrasting the rezoning there with the city’s draconian plan to raze and rebuild East River Park.

Roger Manning, another co-founder of M.A.G.I.C., speaking at the rally, said of the city’s plan, “It’s bulls—. It’s not a climate center, it’s an upzoning. There’s no legal requirement for a climate center. We already have a climate center there — the Billion Oyster Project, GrowNYC, the Harbor School.”

However, a spokesperson for the Trust for Governors Island bristled at the M.A.G.I.C. members saying the rezoning would result in little more than an “office park” and called it misleading. He said the Trust plans to release a solicitation to attract an educational or nonprofit research institution focused on climate-change research and education.

Erin Hussein, who is running in the District 2 primary against Rivera on June 22, expressed surprise the councilmember missed the May 11 committee votes.

Boylan said, “There’s nothing more important to me than green space, on which we depend. It’s time to elect a new City Council, mayor and borough president.

“What would our community be if Jane Jacobs hadn’t saved Washington Square Park?” she asked. “Robert Moses wanted to run a highway right through here.”

Boylan said the community boards, which the B.P. oversees, need reforming, as well.

“People think they serve the councilmembers or borough president who appointed them [to the boards] and not the people,” she said. “It’s really ass backwards.”

Boylan is plaintiff in East River Park ACTION’s lawsuit to stop the East Side Coastal Resiliency plan, which would smother the current park under up to 10 feet of infill dirt.

Fannie Ip of East River Park Action said the protesters were “all in the same boat. It’s two development projects and a bad flood-control plan.”

In the case of the Elizabeth St. Garden, the de Blasio administration wants to build housing on much of it, despite staunch opposition from Community Board 2 and basically every politician other than Chin and Gail Brewer, the current borough president.

“It’s a false choice to pit one aspect against another, to divide and conquer,” Joseph Reiver, the garden’s executive director, said, of saving the garden versus building housing. “It is a citywide issue, the loss of green space. They’re demonizing these groups or they’re brushing them aside.”

As a nonprofit, the garden cannot endorse candidates. But he said both Boylan and Brad Hoylman, who is also running for Manhattan B.P., visited the green space and met with its members to talk about the issue.

“And that means a lot,” Reiver said. “Chin and de Blasio haven’t come to the garden, though we’ve invited them to.”

Corrections: The original version of this article contained inaccurately high figures for the F.A.R. values in the various modifications of the Governors Island rezoning plan. Also, the article stated that, under the rezoning, buildings on the southern part of the island would all be up to 20 stories tall and, in one case, 25 stories. The rezoning’s actual parameters for new buildings are 125 feet tall to 225 tall — roughly 12 stories to 22 stories tall.