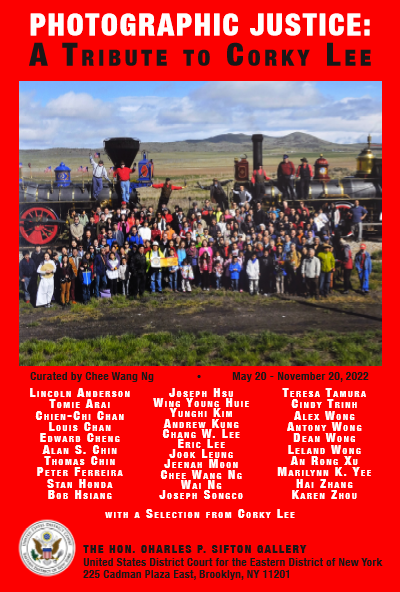 The photo on the flier for the exhibit, above, shows a reenactment that Corky Lee organized of the 1869 golden spike ceremony of the First Transcontinental Railroad with Asians and Asian Americans, including descendants of Chinese laborers, at Promontory Point, Utah, in 2014. (Photo by Corky Lee)

BY THE VILLAGE SUN | Another Corky Lee photo tribute show is being held, this time in a courthouse gallery in Downtown Brooklyn.

A legendary Chinatown activist photographer, Lee died of COVID at age 73 in January 2021. Lee was well known and beloved in Chinatown and the Asian and Pacific Islander community and among local news circles for his work during his life. He went by the humorously self-deprecating title of the “undisputed unofficial Asian American photographer laureate.” However, he received even wider recognition after his death, which was covered by national and international media.

Lee’s photo recreation of the 1869 “golden spike” celebration of the finishing of the First Transcontinental Railroad — this time, though, using descendants of the Chinese workers who actually laid much of the track — has become iconic.

Titled “Photographic Justice: A Tribute to Corky Lee,” the new group photo exhibit is curated by Chee Wang Ng. In addition to photos by his photographer friends and colleagues, this show will also include works by Lee, thanks to permission from the photographer’s estate. It marks the first time since Lee’s passing that his photos will be publicly shown.

The show’s theme is “Healing.”

The exhibit will run from May 20 to Nov. 20 at the Honorable Charles P. Sifton Gallery, in the U.S. District Court for the Eastern District of New York, at 225 Cadman Plaza East, in Brooklyn. The courthouse gallery’s hours are Monday to Friday, 8:30 a.m. to 5 p.m.