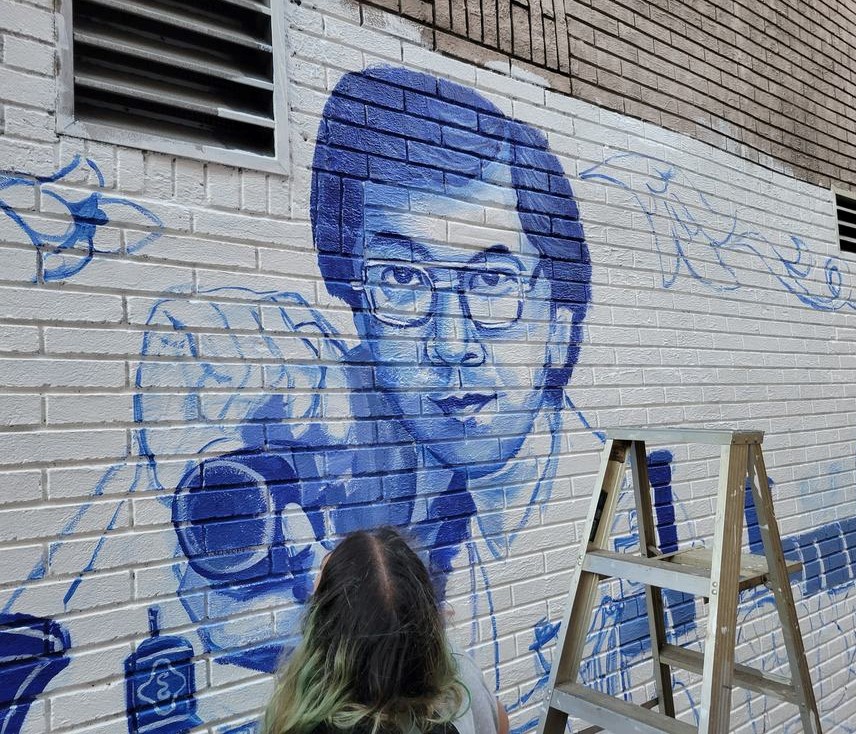 The mural's central image of photographer Corky Lee is a self-portrait. (Photo by Karlin Chan)

BY THE VILLAGE SUN | Corky Lee is riding high on a new piece by the Chinatown Mural Project.

The tribute is located on the one-block-long, bending Doyers Street, just off the Bowery between Chatham Square and Pell Street.

Chinatown’s premier documentary photographer, Lee, 73, died of COVID in January. For nearly five decades, since the 1970s, he covered not only Chinatown but all of the city’s Asian-American and Pacific Islander communities, as well. His whimsical moniker was the “undisputed unofficial Asian American photographer laureate.”

The Doyers painting includes two photos of Lee by Karlin Chan, the mural project’s founder, along with a self-portrait in the center. The photo on the left shows Lee saluting while proudly wearing his American Legion cap; his father was a veteran and Lee was active in the Chinatown American Legion post.

The mural also references the famed transcontinental railroad “East meets West” historic photo of 1869. Lee made it a personal mission to re-photograph the picture, so that it included descendants of the Chinese workers who had toiled on the project. The photo’s original version only contained white men.

Lee worked with advocates on the West Coast and others to organize the reenactment the “Golden Spike” photo at Promontory Summit in Ogden, Utah. It was one of his most popular photos.

The mural is done in shades of blue on an off-white base to resemble the palette of Ming dynasty porcelain.

Peach Tao, the Chinatown Mural Project’s resident painter, did most of the mural. For this one, Marissa Molina, a portrait artist, was also brought on board to paint the faces.

Under the center image of Lee are the “Chinatown Homies” who were his buddies, including Karlin Chan, Victor Huey, filmmaker Wing Lee, author Henry Chang and actor Geoff Lee.