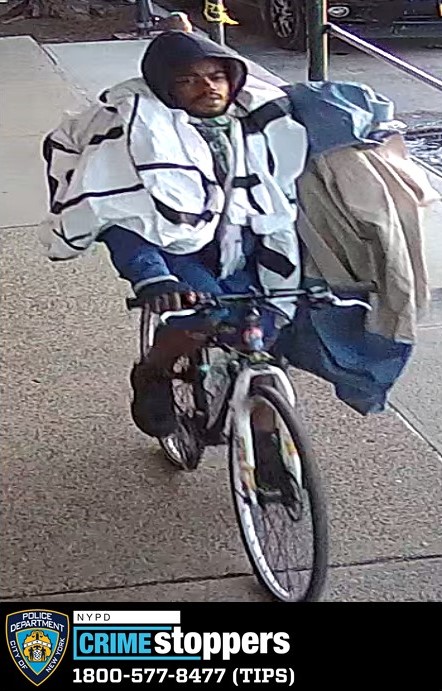 A new surveillance photo of the alleged bikeway attack suspect shows him riding his white bike and toting what looks like a garment bag. (Courtesy N.Y.P.D.)

BY THE VILLAGE SUN | Police released additional surveillance photos and video of the suspect in the March 27 early-morning sexual assault and robbery of a female jogger on the Hudson River bikeway outside Pier 40.

Cops said a 39-year-old woman was jogging northbound on the bikeway at 6 a.m. past Greenwich Village’s community sports pier at Houston Street when she was accosted by a cyclist. The man rode up to her and pushed her down to the ground, then choked her, sexually assaulted her and stole her cell phone.

E.M.S. responded and transported the victim — who suffered bruising and pain — to the hospital for evaluation.

The suspect is described as around 20 to 30 years old, 5 feet 9 inches tall and weighing 180 pounds, with a dark complexion and beard.

Police ask that anyone with information regarding the suspect’s identity call the N.Y.P.D.’s Crime Stoppers Hotline at 1-800-577-TIPS (8477) or for Spanish, 1-888-57-PISTA (74782). Tips can also be submitted on the Crime Stoppers Web site at WWW.NYPDCRIMESTOPPERS.COM or on Twitter at @NYPDTips. All tips are strictly confidential.