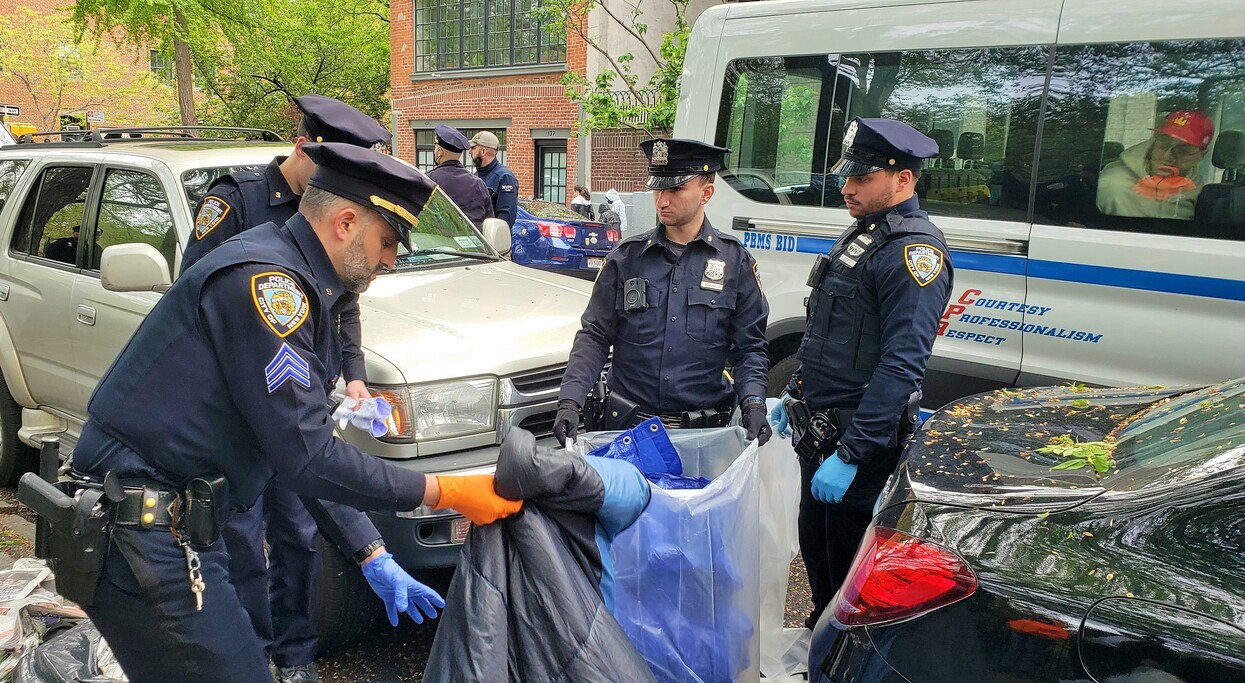 Officers put Johnny Grima's possessions into plastic bags as he was taken away in a police van. (Photo by Everynight Charley Crespo)

BY EVERYNIGHT CHARLEY CRESPO | Sunday morning, as some parishioners were leaving St. Brigid-St Emeric Church and other worshippers were arriving at Trinity Lutheran Church, they witnessed 14 police officers evicting a man out of a pup tent alongside Tompkins Square Park on Avenue B between E. Eighth and E. Ninth Streets.

Witnesses said they saw the police remove the man from his tent and put him into a police van, and that he appeared to be handcuffed.

A police spokesperson told The Village Sun that the individual was Johnny Grima, a 37-year-old homeless man. Grima was charged with resisting arrest, a misdemeanor, and erecting a tent on a city sidewalk, a violation.

Grima has been previously arrested in the area on similar charges, including as recently as this past Wed., May 4, when he was cuffed nearby on E. Ninth Street on what has been dubbed “Anarchy Row.”

Sunday morning, observers shouted in protest as gloved police officers collected Grima’s belongings and stuffed them into large plastic bags. The police did not respond to the bystanders, who scolded them that what they were doing was wrong. Moments later, Department of Sanitation employees standing by with a truck cleared the area.

As the Adams adminitration continues its policy of removing homeless encampments in public spaces and trying to direct the individuals to Safe Haven-style shelters, the East Village and particularly Avenue B has become a repeated target. “Anarchy Row” has been a flashpoint as cops have cleared out an enacampment there more than once.

This time, though, this was not what one might call a full-blown encampment. This was one man inside one pup tent.

The police spokesperson said members of the New York Police Department’s Legal Unit and TARU (Technical Assistance Response Unit) were on the scene during the clearing of Grima’s tent and his arrest, as well as Chief McGuinness and Deputy Inspector Ralph Clement, the commanding officer of the Ninth Precinct.

Presumably, Grima will be back on the East Village’s streets later today. Neighborhood residents will offer him a free pup tent. The police will return to clear him away again.

Grima has said he does not feel safe living in city homeless shelters and will only accept permanent housing.