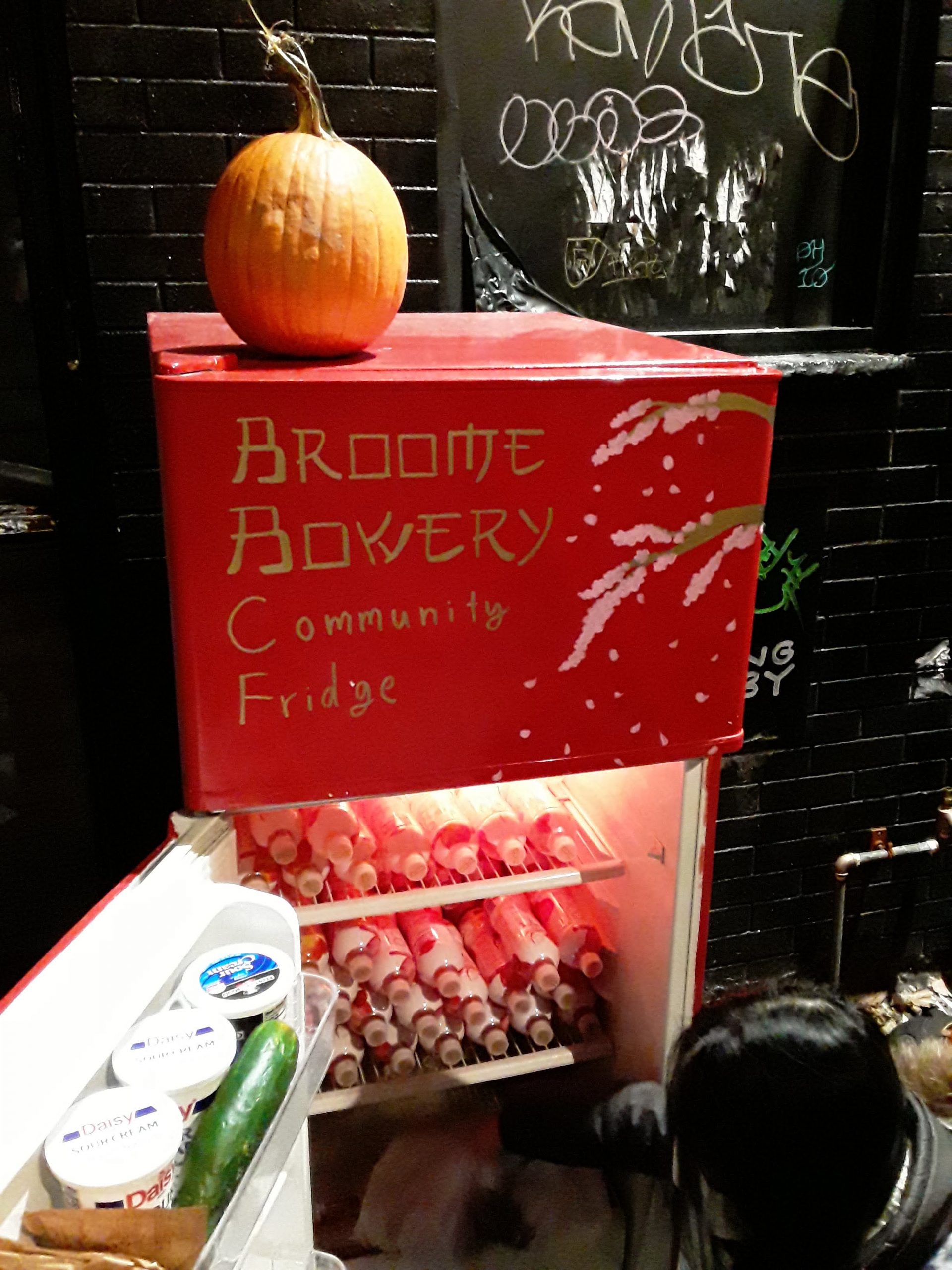 Checking out the Broome Bowery Community Fridge. (Photo by The Village Sun)

BY LINCOLN ANDERSON | Hey, what’s in the fridge?

At least, that’s just what was in one so-called “community fridge,” on Broome St. near the Bowery on the Lower East Side/Chinatown, a few days ago around 4 a.m.

Unlocked — and apparently plugged into an electrical outlet somewhere — the fridge offers its fare for free to all comers.

There are actually a bunch of community fridges around the city and more are said to be coming.

There’s another one outside S’MAC, the East Village macaroni-and-cheese mecca, at 197 First Ave. at 12th St. The restaurant’s Web site even allows people to donate a meal — or more than one — to the fridge.

Yet another community fridge is on Grand St.

Diane Hatz is also involved with the First Ave. fridge. The East Village resident is the C.E.O. and founder of both BOMA Grow USA and Whole Healthy Group; the two organizations focus on working to create a “regenerative agri-system and world” through food and farming.

Hatz explained the community-fridge concept to The Village Sun.

“They started in Germany about 2012-2014 as a way to reduce food waste,” she said. “They came to the U.S. about 2019 and really took off when the pandemic insurance was expiring. There are some that are part of a network, like the Freedge and Friendly Fridge, but most are just people doing it. Here in NYC there’s a network for distribution that’s started and we’re all connected and helpful with/to each other on Instagram. So it’s a connected, independent community.”

In a discussion on the East Village Neighbors Facebook page about the fridge outside S’MAC, locals recently weighed in on rumors that some people were allegedly taking food from the refrigerator and selling it on E. 14th St. It’s a little unclear if that really happened, though. What’s more, the general sentiment on the thread was that food donated to the fridge is a “gift,” and that one cannot — and should not — control what a person does with a gift after receiving it.

Also, people on the thread agreed that if individuals are really in need, then they should not be judged if they “take more than their share,” since the whole idea behind the fridges is to help the food insecure and the poor. In short, fridge “givers” should not judge fridge “takers.”

The S’MAC community fridge is now operating under Hatz’s nonprofit, Change Food. As a result, this fridge is protected under the 1996 Bill Emerson Good Samaritan Act. Basically, the act encourages the donation of food by removing criminal and civil liability should the food later cause harm to an individual.

As for who operates the Broome Bowery Community Fridge, it was not immediately clear.

This reporter sampled the aforementioned ham-and-cheese sandwich from the Broome Bowery fridge. Instead of mayonnaise, it appeared to have a thin layer of butter spread on the bread, which is safer since mayo can spoil pretty quickly. The sandwich was fresh, tasty and welcome in the early morning, at an hour when most food shops nowadays are closed due to the ongoing pandemic. (At the time, the reporter was not informed about the community-fridge initiative, otherwise he probably should have left the food for someone who was food insecure.)

Hatz acknowledged that the effort is a work in progress.

“I’ve mentioned to a few friends that the whole concept of these community fridges is a social experiment — they have not been done before and no one knows if the concept will work long term,” she said. “I believe it is an amazing community effort, and its success or failure will depend on each and every one of us having compassion, patience and the understanding that we are all in this together — whether we are giving to the fridge or taking what we need from it.”