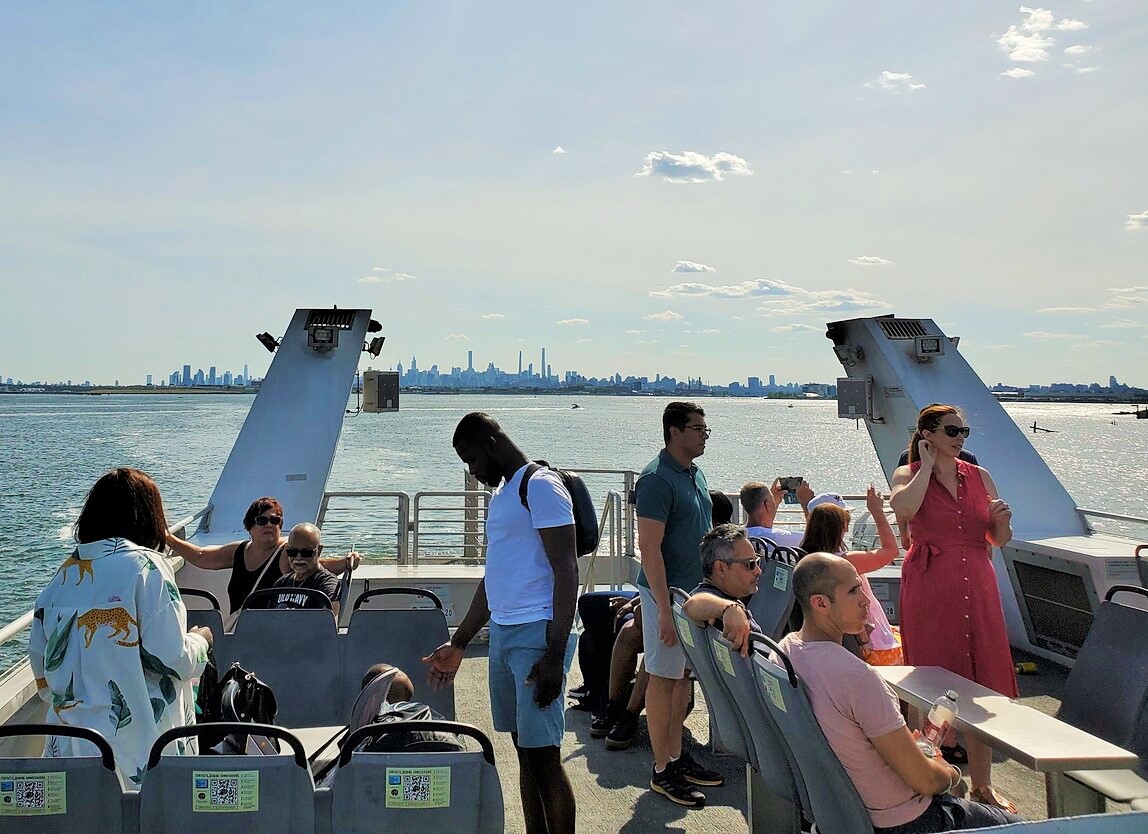 NYC Ferry passengers waited atop a boat at Throggs Neck, the last stop on the Bronx route, on the Fourth of July wekeend as the ferry readied to head back toward Manhattan. (Photo by The Village Sun)

BY THE VILLAGE SUN | It’s one of the best deals in town  — plus a much cheaper way to see the city by water than the Circle Line — and just a superfast, stress-free way to get around.

However, New York City’s ferry system was plagued by financial mismanagement under Mayor de Blasio — to the tune of $224 million. And the ferries have been heavily subsidized by taxpayers — and at an even higher rate than previously reported.

Those are the conclusions of a new audit of the ferry service by Comptroller Brad Lander.

A ride on the ferry is the same as a subway or bus trip, $2.75. The only difference is that, if you get to the end of a ferry route, such as Throggs Neck, in the Bronx, and want to stay on the boat and make a round trip back to Manhattan, you have to pay an additional fare.

However, the ferries’ overall financial picture has been the farthest thing from shipshape, Lander says. According to the comptroller, the city’s Economic Development Corporation underreported nearly a quarter of a billion dollars in NYC Ferry expenditures during former Mayor Bill de Blasio’s administration.

E.D.C. incurred a total of $758 million in total ferry-related expenditures from July 1, 2015, through Dec. 31, 2021, yet only reported $534 million as such in its audited financial statements and other records, according to Lander.

In addition, the total city subsidy-per-ride is nearly double the original estimate of $6.60 and has been consistently underreported, the comptroller’s audit found. Per the audit, in Fiscal Year 2021, the city subsidy amounted to $12.88 per ride — 50 percent higher than the $8.59 that E.D.C. reported.

The audit also found that several decisions — including the early termination of the previous East River route operator’s contract and lack of proper oversight of vessel acquisition — resulted in as much as $66 million in unnecessary expenses.

According to Lander, the audit’s many findings “collectively indicate poor oversight and a failure to hold the operator, Hornblower, accountable to the fiscal terms and conditions of their contract.”

He called for a new request for proposals, or R.F.P., potentially to find a new operator for the waterborne transit system, or at least to firm up the contract conditions.

The comptroller made 11 recommendations aimed at improving oversight over the ferry system and protecting the city’s fiscal integrity. E.D.C. has accepted some of the suggestions for providing enhanced transparency and has agreed to issue a new R.F.P. for the system operator, as noted above. However, according to Lander, the develepment corporation “has refused to include a full accounting of the ferry system” in its audited financial statements or to seek to recover the roughly $12 million in overpayments to Hornblower.

The largest factor in the lowballing of the ferries’ cost is E.D.C.’s decision in 2018 to stop including depreciation in calculating the total cost, a practice the city had used from 2002 until 2017, according to the comptroller.

The city removed capital expenses — such as construction of ferry docks — from its calculation in 2018, shortly after then-Mayor de Blasio announced a $300 million capital investment in the ferry system, Lander said.

In addition, Lander said the ferry system under De Blasio was plagued by “poor financial management,” including purchasing vessels at higher-than-market costs, as well as the previously noted early termination and transfer of the East River contract.

The comptroller’s analysis of boat costs found E.D.C. paid $34 million in “questionable vessel expenses” to Hornblower, which was charged with overseeing acquisition and construction of the ferries. Purchase costs jumped by roughly $2 million per vessel from 2016 to 2018 and 2019, the analysis found.

In addition, the audit said, Billybey originally operated the ferry system’s East River route under a five-year agreement with E.D.C., but E.D.C. terminated the contract nearly three years early, incurring additional costs of $21 million to Billybey for early termination, plus $3 million to Hornblower for the transition.

The audit blasted “E.D.C.’s weak enforcement of contract provisions” with Hornblower, resulting in the overpayments.

The audit makes 11 recommendations. E.D.C. agreed with two, partially agreed with three, stated that it is already in compliance with two and disagreed with four: