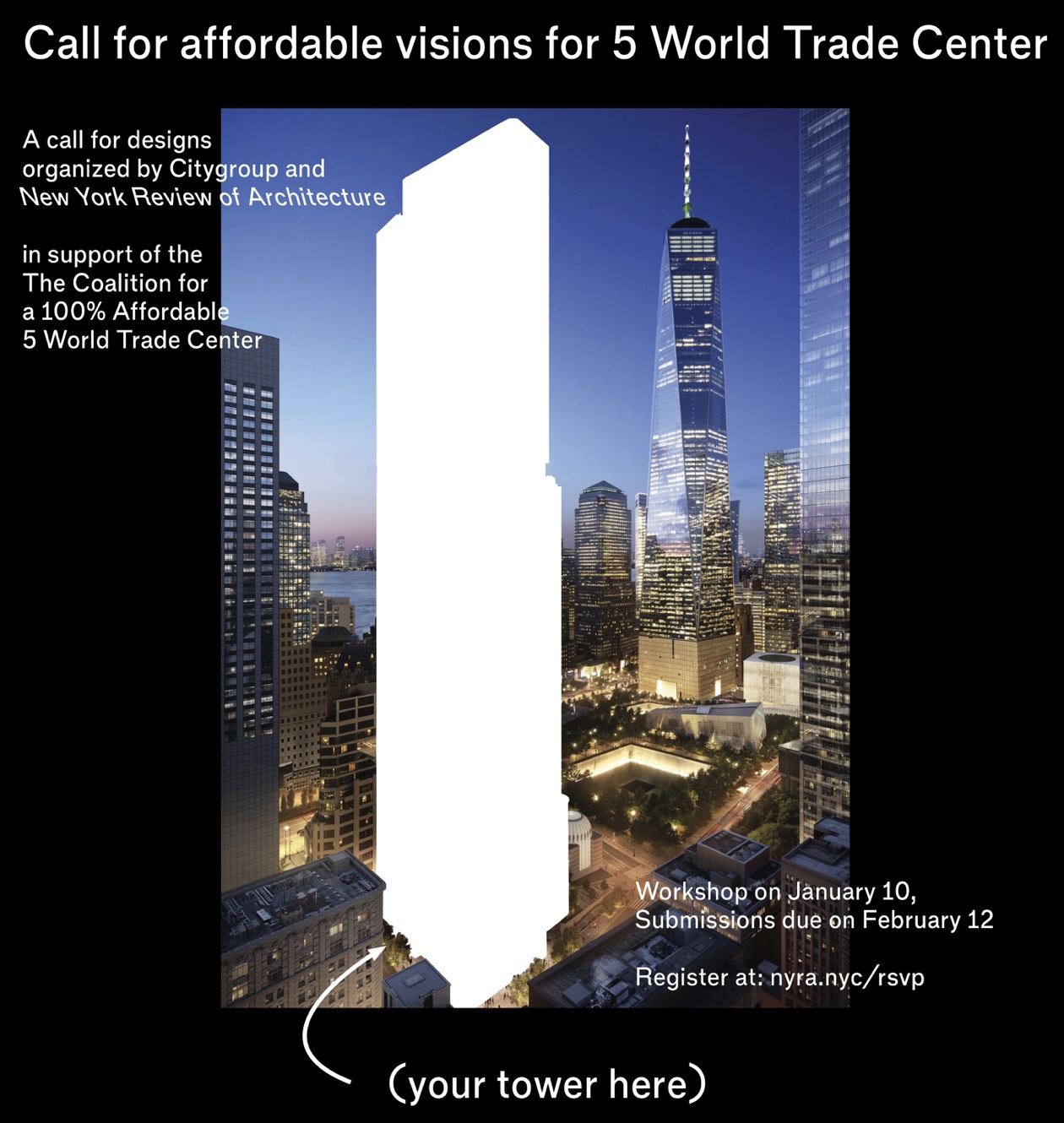 An architects collective is putting out an open call for designs for a 100-percent affordable tower at 5 World Trade Center.

These attendees, who almost all spoke in the first half of the hearing, spoke virtually unanimously in favor of a plan put forth by Brookfield and Silverstein Properties to develop the final site of the World Trade Center campus as an 85-story residential tower with 75 percent luxury and 25 percent affordable housing, for a total of 1,200 units.

The project can’t be delayed over superfluous quibbles around affordability, they argued, with one participant questioning whether the building would be finished within her lifetime.

Members of the Coalition for An Affordable Tower 5 shot back, stating that public land needs to be for public goods; to them that means 100 percent affordable.

With 25 percent of the building’s units, or 300 in total, set aside as below market rate, Lower Manhattan would be gaining five times the amount of affordable housing built in a typical year, they said.

These talking points may have been misplaced, however. Contrary to what many participants probably thought, the public hearing wasn’t held to discuss Brookfield and Silverstien’s plan — which will be taken up at a later date.

Instead, this hearing was held to discuss a modification to the World Trade Center’s general project plan, allowing for residential construction on a site previously designated for office and commercial use, as well as the contentious mixed-use guidelines written by the developers themselves, which could restrain how the site is developed.

Both of these items were approved unanimously by the Lower Manhattan Development Corporation’s board at a December meeting.

Among the attendees was Adam Meister, senior vice president of the Howard Hughes Corporation, which plans to develop a residential tower at the hotly debated 250 Water St. site in the South Street Seaport historic district.

“The [5 World Trade Center] project will deliver a much-needed infusion of housing, particularly permanent, deeply affordable units to address the substantial need for affordable housing in Lower Manhattan,” he said. “It will do it without public subsidy that is better spent elsewhere to create units in other communities where those dollars can be more effectively deployed.”

Other speakers in support of the Brookfield and Silverstein proposal were Leslie Koch, president of the Ronald O. Perelman Performing Arts Center; Jessica Lappin, president of the Downtown Alliance business improvement district, who asked that affordability be maximized as much as possible; Charlie E. Samboy of the New York Building Congress; Reggie Thomas, the senior vice president of government affairs at the Real Estate Board of New York (REBNY); Frank Hussey, project superintendent at Tishman Realty & Construction Corporation of NY/NJ; and Mark Murphy, the son of late Congressmember Jack Murphy and a recent candidate for Staten Island borough president.

“While the goal for 100 percent affordability is wonderful and I advocate for it … I just don’t think it’s realistic, in that, any kind of affordable housing is a win,” said Jenny Chao, the director of communications and investor at Day One Ventures.

“To have 100 percent affordable from a resident point of view — I don’t think that’s viable because everything will get locked up in the government,” she added. “It will bring a lot of jobs if this project goes ahead. And if it doesn’t — if it’s locked up in this fight between all-100 percent affordable versus some affordable — I don’t think it will ever get finished. And as someone who’s lived here for all of her life, I would really love to see it done in my lifetime.”

Two other speakers — Luisa Colón, a marketing consultant at Silverstein Properties; and Mark Marcucci, a Silverstein media consultant — echoed Chao’s comments, but failed to disclose their direct affiliation with the project’s developer.

“There are many people who spoke tonight who are directly paid by Larry Silverstein who did not announce this,” he said. “This use of distorting this public forum is questionably even legal. But it definitely is a disrespect to all the government agencies involved — L.M.D.C., E.S.D.; they should not have their meetings that are supposed to engage the public distorted by lobbyists … supported by Larry Silverstein. … We need to have the working sessions that have been asked for by all of the elected officials and the real members of the community for the last year.”

According to a state database, both Silverstein and Brookfield have hired the prominent firm Kasirer to lobby on their behalf to the Empire State Development Corporation, Port Authority and local politicians, conducting “WTC 5 outreach and relationship building.”

Other participants in the forum struck a different note.

“The opportunity to build 100-percent affordable housing should not be missed,” said Councilmember Christopher Marte. “The families that will be able to benefit from living in a transit-rich neighborhood is a once-in-a-lifetime opportunity.

“One hundred-percent affordable housing at the World Trade Center will show New Yorkers and the world that New York City will stand as the center of opportunity for all people,” he said. “We should not be sacrificing true affordability for design and aesthetics,” he added, referring to the design guidelines that require, among other provisions, that “The Tower Facade shall have a glassy character” and include a complex three-part “podium facade.”

According to a presentation by Holly Leicht, the L.M.D.C. chairperson, the currently proposed tower would cost upward of $930 million in government subsidies to build.

Speaking for state Senator Brian Kavanagh, his representative Emily Leng said, “We ask that a sentence be included in the amendment [of the WTC General Project Plan] that includes that the agencies will make every effort to achieve maximum affordability at the site.”

Sarah Cassell, a longtime resident of Gateway Plaza in Battery Park City, said an affordable 5 WTC would help locals remain in the community, even as it is becoming harder and harder to do so.

“With the reneging of the Gateway Plaza rent controls my family will very likely be priced out of the neighborhood,” she said. But, she added, if 5 WTC were fully affordable and targeted to 9/11 survivors, she might have a chance of staying in the area.

The 100-percent affordable cause has also been taken up by the architects collective CityGroup and the New York Review of Architecture, which recently released a “Call for affordable visions for 5 World Trade Center.”

“As an architect I believe we need an inspiring design that is a symbol of the city’s commitment to housing all people,” said Michael Cohen of CityGroup. “We don’t need another generic tower that represents the power of real estate developers to define the physical appearance of the city.”

The call for visions asks teams of architects to submit on or before Feb. 12 renderings of a 100-percent affordable tower. On Feb. 15, when the public comment period ends for the general project plan modifications, they plan on submitting all renderings on the public record.

“This is not an abstract, pie-in-the-sky call for ideas,” the announcement states. “This call is structured around the actual approval process for the tower.”

“We have seen an incredible amount of enthusiasm for the call,” said Nicholas Kemper, who writes for the New York Review Of Architecture, noting that 112 teams from around the world have thus far registered.

Members of the public are encouraged to submit comments to the Empire State Development Corporation via e-mail to WTCSite5@esd.ny.gov up until Feb. 15th at 5 p.m.