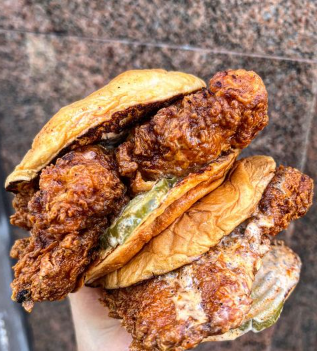 BY CAROLINE BENVENISTE | A new newspaper, a new column. Like we did before, we’ll try to report on all the retail and restaurant activity in the West Village and hope to eventually expand eastward. Some of the recent trends we’ve noticed are a proliferation of women-owned women’s clothing stores on Bleecker Street, a slew of new Italian restaurants and lots of changes on W. 14th Street (openings, closings, demolition, near-collapses). Since we have a large backlog, let’s get started:

Food: Taco Village NY (106 MacDougal St. between Bleecker Street and Minetta Lane) is a small space with a larger-than-life, festively dressed, Day of the Dead figure outside. Further recommending it are its enjoyable tacos, including the now-ubiquitous birria (served with or without consommé) and the hard-to-find California burrito, which contains french fries. Chickenhawk (319 Sixth Ave. at W. Third Street) opened in the space that used to house Crab du Jour. It features Nashville-style hot chicken, as well as a monthly special created in collaboration with New York chefs. The first up is Persian fried chicken by chef Einat Admony of Balaboosta and Taïm. Holiday Bar has opened at 10 Downing St. (at Sixth Avenue) where Cafe Clover used to be. In November, Vogue wrote an article about them titled: “Holiday Bar Is the New Restaurant Matching the High Octane Energy of the Moment.” Kyle Hotchkiss Carone, a partner in the place, launched Grand Tour Hospitality in 2020, whose portfolio also includes American Bar and Saint Theo’s. If you’re craving meat, a good option might be & Son Steakeasy (62 W. Ninth St. near Sixth Avenue). Bar food is available in the front, and in the back dining room a multicourse steak dinner is served with one vegan and one fish option. The steaks are sous-vided first, then seared in a cast-iron skillet. If you are not a meat fan, a better option might be The Wesley (310 W. Fourth St.), a new plant-focused restaurant. While this eatery does serve some “sustainable animal protein dishes,” the vegetables here are the stars of the show. Playa Bowls (493 Sixth Ave. between 12th and 13th Streets) serves acai, coconut and pitaya bowls, as well as smoothies and juices. The brightly colored space is certainly cheerful, but the beach chair outside looks out of place on a cold winter day.

Retail and services: mure + grand (319 Bleecker St. at Grove Street) is a women-owned New York-based boutique selling clothing, jewelry and accessories. wyld blue (350 Bleecker St. at West 10th Street) is a woman-owned boutique from Montauk resident and Australian native Sasha Benz. The shop carries home decor items, childrens’ clothes, women’s fashion and jewelry and some vintage items. Lele Sadoughi (387 Bleecker St. at Perry Street) is a Dallas native who worked for many fashion brands, including Banana Republic, J. Crew and Tory Burch. She started her own brand in 2012 and sells headbands, jewelry, sunglasses, hats, handbags and other accessories. She also has stores in Texas and California. Hanky Panky (370 Bleecker St. near Charles Street) is a New York-based business that sells fancy underwear. This is the brand’s first brick-and-mortar store. Way Forward (330 Bleecker St. between West 10th and Christopher Streets) is a genderless, casual-wear brand that highlights street style (think hoodies and such). QB House Tokyo West Village (259 Bleecker St. between Morton and Cornelia Streets) is a Japanese hair salon with more than 704 stores globally, mostly in Asia. They offer haircuts only, no wash or styling. The cost is $25 for walk-ins, $35 for appointments and the haircuts take about 20 minutes.

Keratinbar Chelsea (152 Seventh Ave. South between Charles and Perry Streets) has closed and a marshal’s legal possession notice hangs in the window. Also with a marshal’s notice is the now-defunct Avena Downtown (260 Sixth Ave. between Bleecker and West Houston Streets). The company filed for bankruptcy protection a year ago and two of the restaurants have closed (the E. 66th Street location is still open). The Village Sandbar (64 Greenwich Ave. near Perry Street) was a reincarnation of The Original Sandwich Shop, which closed in July 2021, but now it too has closed.

Carriage House will open at 142 W. 10th St., between Waverly Place and Greenwich Avenue, and according to their Web site, they will serve “American Homestyle Fine-Dining Cuisine encapsulating our favorite parts of New York culture and cuisine.” The space has been empty since Portuguese restaurant Louro closed in 2016. Justine’s on Hudson (518 Hudson St. at W. 10th Street), a neighborhood spot with ingredients from Europe and from local farms, dairies and artisans, is opening where a Starbucks used to be. The owner also operates two wine stores. alts (573 Hudson St., between W. 11th and Bank Streets) is opening a bit north of Justine’s. They describe themselves as “alteration specialists” and operate six other locations in the city. I spotted a couple of Italian gentlemen outside 89 Greenwich Ave., between Bank and W. 12th Streets, and they told me that a restaurant called Nerea would be opening in the space. Previous to that, Nightingale was briefly in residence, and before that, the well-liked neighborhood staple Good. Two new markets will be opening in our area: Tashkent Market is coming to 378 Sixth Ave., at Waverly Place, the long-empty space near the W. Fourth Street station subway entrance that was formerly a Duane Reade. The original location of this Uzbek food store is in Brighton Beach, and this location is expected to open by year’s end. In 2023, a branch of Lincoln Market will open at 501 Sixth Ave., between 12th and 13th Streets, where a Rite Aid had been for years. cruml cookies is opening where Davidovich very briefly existed, at 195 Bleecker St., between Sixth Avenue and MacDougal Street. There are more than 600 locations nationwide, with one other NYC location. Typically, the stores have a weekly six-cookie rotation, but the signature milk chocolate chip cookie is always available. Gab’s (76 Carmine St., between Varick and Bedford Streets) is the brainchild of Gabby Madden, a local artist. Toriko NY, a yakitori-style grilled chicken restaurant was the previous tenant, and before that, the French restaurant Gloo. Dôen (84 Bleecker St. at Perry Street) is another women-owned business coming to Bleecker Street. They will carry women and girls’ clothing and accessories.

Don Angie (103 Greenwich Avenue at 12th Street), which is one of New York’s hardest reservations, is expanding into the old Wallflower space next door. The new dining room will be used for private events. Murray’s Mac and Cheese Bar (250 Bleecker St. at Leroy Street) closed for renovations and has now been integrated into the main store. Mi Garba, a Tuscan restaurant that used to be in the Union Square area before closing, is now returning to a storefront at 310 Bleecker St. (between Grove and Barrow Streets). 232 Bleecker (232 Bleecker St. at Carmine Street) was a full-service restaurant from The Dig Food Group with a large wood-burning hearth. The restaurant closed during the pandemic, then tried a few different formats and ultimately closed again. Now, regrettably, it has morphed into a standard DIG Inn. Demolition has started on a four-building site at the southwest corner of 14th Street and Sixth Avenue (519 and 523-27 Sixth Ave./100 W. 14th St., 102 and 104-06 W. 14th St.). Over the last year or so all businesses in those buildings closed, including Red Mango, a Turkish deli on Sixth Avenue and related bakery on 14th Street, the pizza shop on the corner and Mikado, a Japanese restaurant (which has relocated to a more attractive space at 109 W. 14th St., between Sixth and Seventh Avenues). Workmen at the site said that a condo is planned for the space. Rivoli Pizza (176 Seventh Ave. South near Perry Street) is now Tivoli Trattoria with a larger menu and spiffier decor. As The Village Sun reported in an Oct. 16, 2022, article, “Pizzeria panic: W. 14th St. buildings evacuated after partial basement wall collapse,” Village mainstay Donut Pub was forced to close due to structural stability issues in its building and those of its neighbors. This Donut Pub remains closed, but the other branch near Astor Place is open for business.