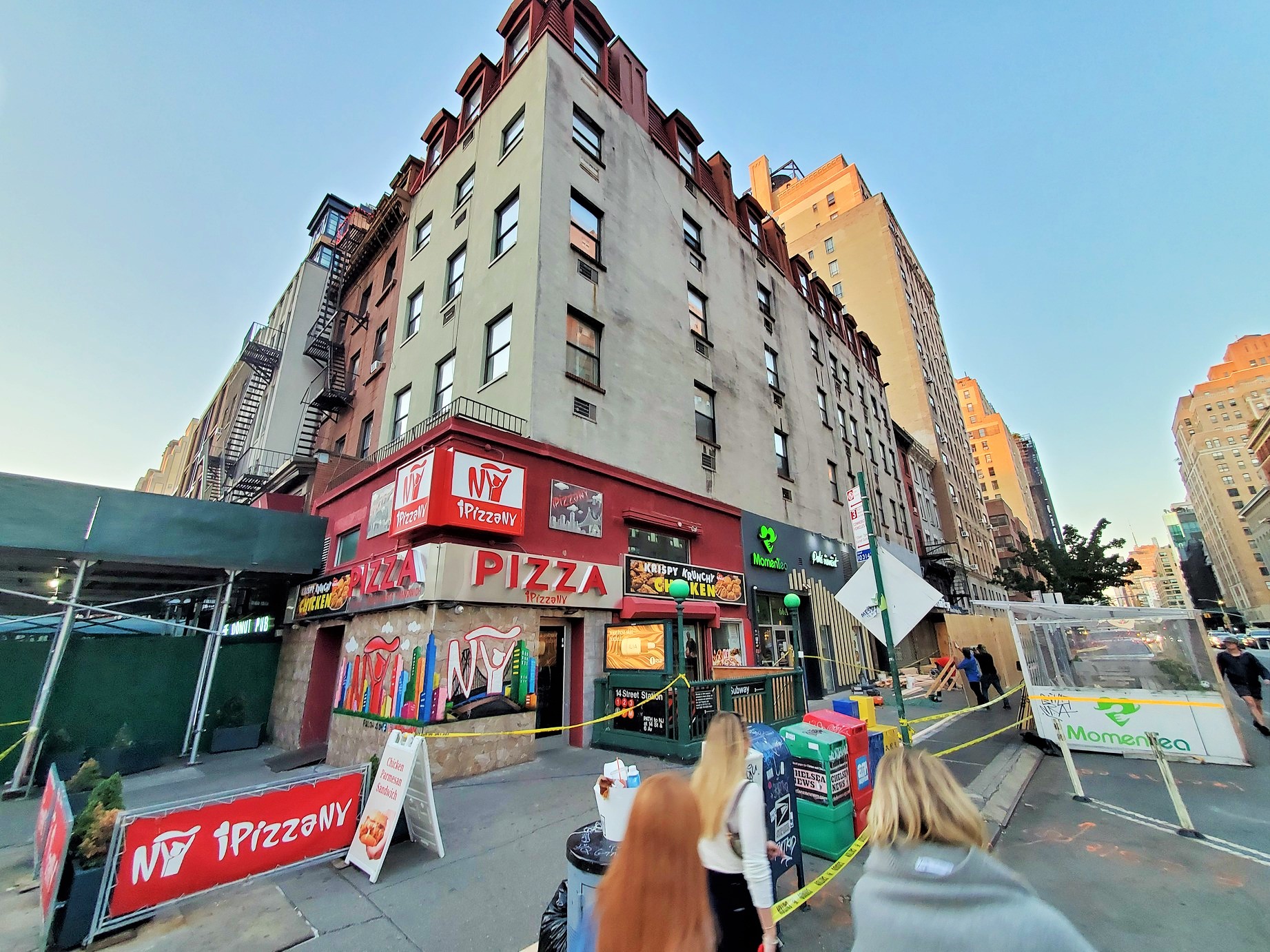 Workers were erecting a fence around the corner buildings on Friday evening. (Photo by The Village Sun)

BY LINCOLN ANDERSON | A partial collapse of a pizzeria’s shared basement wall Friday afternoon caused the building, on the border of Chelsea and Greenwich Village, to shake and vibrate, resulting in the emergency evacuation of it and neighboring buildings.

Early Saturday evening, workers could be seen erecting a plywood construction fence around the northwest corner of 14th Street and Seventh Avenue. The emerging fence was laid out to take up around half the sidewalk’s width and was also going to close off the subway entrance/exit at that corner for the Nos. 1, 2 and 3 trains.

A bystander who was watching the scene and said he worked in a buildling two blocks north said the problem happened around 4 p.m. Friday. He said some of the older upstairs residential tenants had been evacuated to a Brooklyn Red Cross shelter, which he noted disapprovingly is “far” for them.

One of the workers putting up the fence explained, as he gestured toward the pizza place, that a basement wall on the site’s western side had collapsed. But he stated the buildings would not have to be demolished. Asked how long the repairs would take, he shrugged his shoulders and said he didn’t know.

The site is comprised of a number of small buildings, including 201 and 203 W. 14th St. and 64, 66A and 66 Seventh Ave. Affected stores, which have also been vacated by the emergency, include the Donut Pub, PizzaNY, MomenTea / Pokemoment and a nail salon and spa. By Friday evening, a full scaffolding and fence had already been erected in front of the Donut Pub building, at 203 W. 14th St.

The Buildings Department’s Web site records a “complaint” for 201 W. 14th St. on Friday at 4:39 p.m. related to the wall collapse, noting, though, that it had subsequently been “resolved.” The site says the “structural stability” of a party wall — meaning a wall shared by two buildings — was “compromised.”

A full-vacate order was issued, according to D.O.B.

The D.O.B. site also contains an “open” violation for the same property from Sept. 30, with an agency inspector noting, “Failure to maintain building in code… . I observed in the basement in the Pizza NY store having an open sewer line. Repair and/or replace.” The balance due on the violation fine is listed as $625.