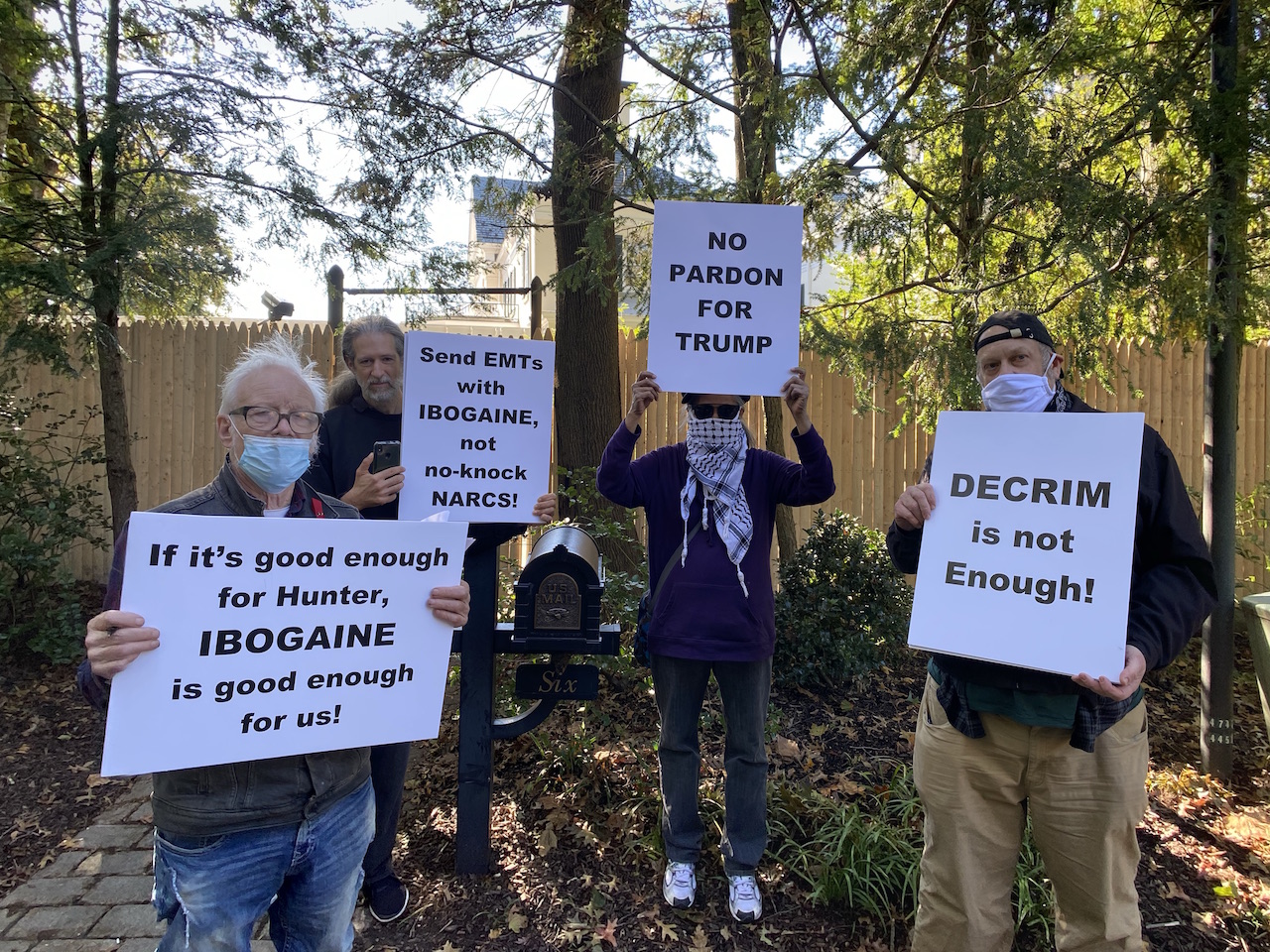 Dana Beal, left, and Cures Not Wars rallied outside Joe Biden's house, calling for him to support the legalization of ibogaine. (Photo by Svetlana Finelt)

BY PAUL DeRIENZO | Joe Biden might have been campaigning in Durham, North Carolina, on Sunday, seeking the electoral votes of a state that rejected Hillary Clinton four years ago. But the action was at his home and church in the leafy and tony suburbs of Wilmington, Delaware.

Cures Not Wars, the perennial drug-reform group launched by Yippie theorist Dana Beal, dropped in on the stately town, arriving without notice to advocate for the African rainforest shrub that’s the source of a powerful psychedelic drug called ibogaine. Beal has been claiming for years that ibogaine interrupts the addict’s insatiable craving for opiates, alcohol and other drugs. He has crisscrossed the country, meeting with politicians as part of his cause.

On Sunday, the half-dozen Yippie stalwarts piled into the stretch van and social distancing and mask wearing was as strictly enforced as possible. They piled out three hours later at the Joseph on the Brandywine Roman Catholic Church, where Joe Biden often hears mass with his M.D. wife, Jill.

But Holy Communion wasn’t the only sacrament on tap at the 180-year-old church built by the Du Pont family for their gunpowder company’s Irish and Italian workers. Beal and his acolytes were there to reveal that Biden’s son Hunter had been searching for salvation in other places then the Bible.

The church is a short hop from the now-fenced-in Biden home, a rambling mansion on its own large lot. Beal aimed to deliver a letter to the Democratic candidate that quoted a 2019 New Yorker article claiming that Joe’s son Hunter Biden went to a clinic in Tijuana, Mexico, in 2014 that provided a treatment using ibogaine.

According to the the article, after receiving the “psychoactive alkaloid derived from the roots of a West African shrub,” Hunter Biden drove to Flagstaff, Arizona, where he practiced Vedic meditation, and where Hunter was advised to meditate twice a day, to help keep “his cravings for alcohol at bay.”

The church has a deep connection to the Biden family. Joe’s son Beau Biden, who died tragically of brain cancer in 2015, is buried there in a manicured churchyard, befitting a site listed on the National Register of Historic Places. But Beal said that even as tranquil a spot as Biden’s home and church should not silence the truth about Hunter’s use of ibogaine to beat his demons.

Social-media sites have apparently been working overtime to silence a New York Post article that perp-walked Hunter’s drug use in a so-far unsuccessful “October surprise” to reawaken Trump’s flailing campaign. But Joe already had confronted his son’s addiction during the first 2020 presidential debate, saying, “My son, like a lot of people at home, had a drug problem… . He’s fixed it. He’s worked on it. And I’m proud of him. I’m proud of my son.”

In The New Yorker article, Hunter says he checked himself into rehab in 2003 and had a relapse in 2010. In 2016, The New Yorker reported Hunter bought crack from a homeless man in Los Angeles, eliciting guffaws from Trump supporters when, days later, Hunter got into a serious car crash on the interstate.

Hunter Biden has also been the target of former New York City Mayor and Trump personal lawyer Rudy Giuliani, whose Ukrainian associates have been leaking snippets of recordings said to be between Hunter and the Ukrainian head of the Burisma gas company. Most major news outlets have buried the Post “scoop” because of the sources’ close links to Giuliani.

Meanwhile, at the Biden estate in Greenville, Delaware, near the old church on Barley Mill Road, Dana Beal was addressing a manila envelope to Joe and Jill Biden, an envelope he said contains two leaflets that the Yippie provocateur proceeded to place in Biden’s mailbox.

One of the color-photocopied broadsides drew the attention of a Secret Service agent at the church earlier. It sports a police publicity photo of a mass of rifles, handguns and other weapons and ammunition seized from white supremacists.

The surprised agent reeled in horror as he took the leaflet and gawked at the picture.

“So you have any guns in the van?” the agent responded, to which the Yippies laughed nervously.

The agent seemed to realize these hippie purveyors of a cure for addiction weren’t a threat as Beal explained the politics of his protest. Then, with a smile, noticeable even under his black face mask, the agent gave the group dispensation to remain for a bit.

Beal said he expects Biden to win on Nov. 3, adding in a reference to the shooting death of Breonna Taylor.

“We want them to replace no-knock narcs with EMTs with a social-worker degree,” he said, briefly pausing before adding, “with ibogaine.”

Beal, a leader of the second-wave Yippies, for years lived at and worked out of 9 Bleecker St., the group’s Downtown “HQ.” But the building was eventually sold out from under them and is now occupied by Overthrow Boxing, a hipster gym that is actually named after the Yippies former newspaper.