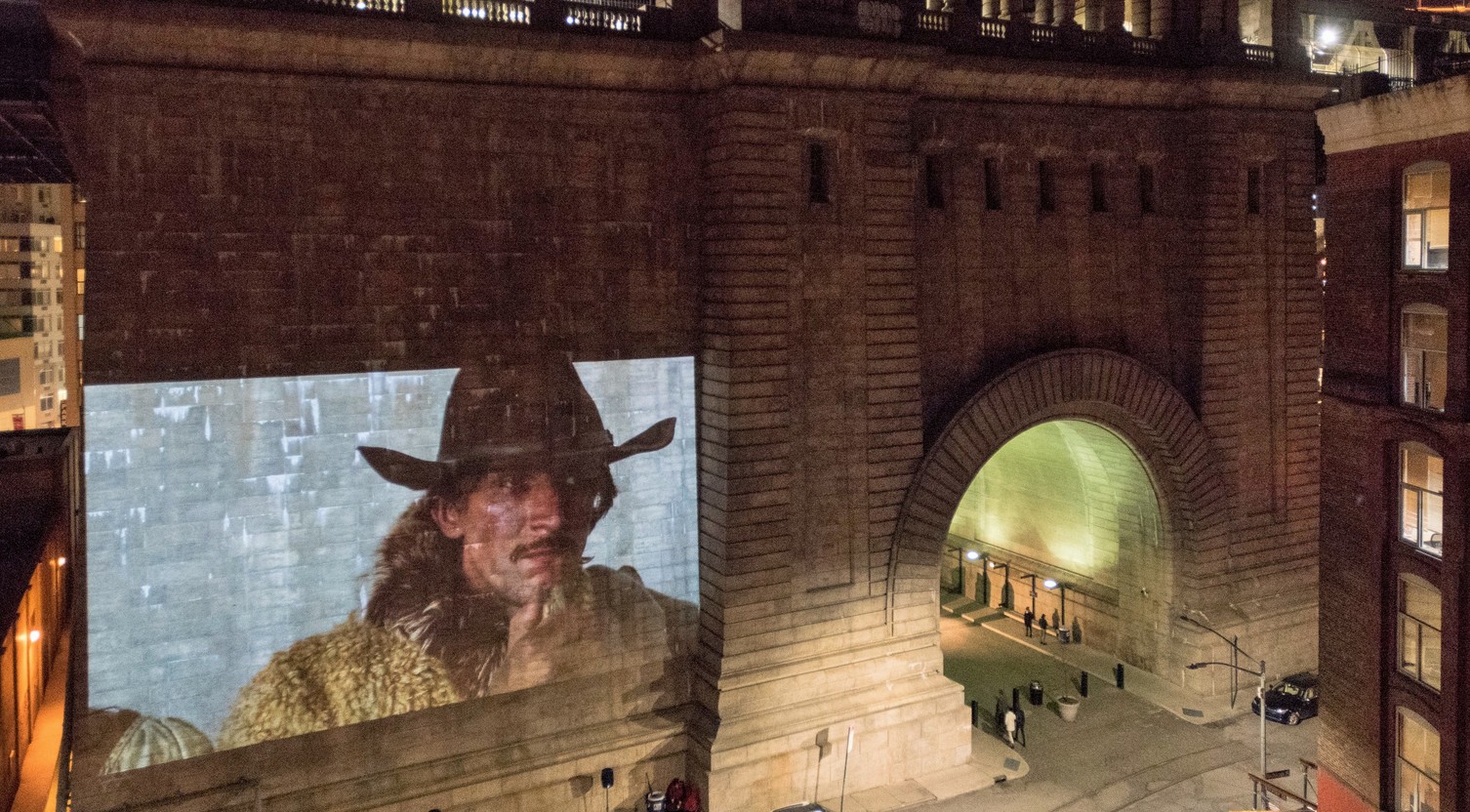 The Creative Climate Awards films will be projected onto the Brooklyn side of the Manhattan Bridge, as well as being viewable online.

The Human Impacts Institute is holding its 11th consecutive Creative Climate Awards festival this month across New York City, with the goal of inspiring political and social action through the arts.

This Thurs., Oct. 14, the festival will project 13 short climate-inspired films onto the base of the Manhattan Bridge in DUMBO, in partnership with the DUMBO Business Improvement District and Two Trees Properties.

Selected from more than 600 entries from across the globe, the films explore different facets of the relationship between health and the environment. After watching the films, which will also be accessible online until Oct. 24, viewers are encouraged to vote for their favorite. The winning filmmaker will take home a $2,000 cash prize.

“We get involved in things when they are personal, and when they touch us,” said Tara DePorte, a Brooklyn multimedia artist and founder of the Human Impacts Institute. With a master’s degree in climate science and policy from Columbia, she is a strong believer in the potential of art to inspire societal action to address the world’s looming climate crisis.

“Art and culture makers are the experts in moving us and making the hair stand up on our arms, connecting beyond the rational,” she told The Village Sun. “We need the creatives to not only inspire us to envision what’s possible. We are not just focusing on the problem, but focusing on how we can make our future big, bold and beautiful.”

The entire screening lasts around two hours, with the films varying in length from one minute to more than 20.

Ranging from a portrait of a blind Iranian fisherman, to a tragic wildfire in a Polish nature preserve, to the absurdity of a group of activists keen on licking Icelandic icebergs, the films take the viewer on an emotional rollercoaster.

“We’ve tried to create an order that really shows people how many emotions you feel going through these issues, but also how there are so many ways to communicate it,” DePorte said.

One film highlights the startling fact that the Indigenous Navajo Nation in Arizona and New Mexico accounts for 75 percent of houses in the U.S. without electricity. Ironically, this community also historically has been exploited by the coal-mining industry.

All of the films are meant to spark conversation, some of them with particular actions attached — help pass the Green New Deal, reduce your plastic consumption — while others are simply a meditation on the relationship between humans and the world surrounding them.

Closer to home, “More Than A Fridge” provides a glimpse into the inner workings of New York City’s new network of community fridges.

Another film, entitled “Welcome Home,” highlights the disparities between New Yorkers from higher and lower socio-economic statuses by chronicling a day in their lives on a split screen.

The fictional story follows a single actor who portrays both the individuals with more and less resources, as they perform everyday tasks such as laundry — taking advantage of an at-home washing machine or lugging their dirty clothes to the laundromat.

The split-screen style incidentally took its inspiration from the 2009 rom-com “500 Days of Summer.”

“Welcome Home” was produced by the unlikely pairing. Kelly Todd is a performance artist and filmmaker, and Zyaijah Bailey, an energy-efficiency coordinator for New York City’s Accelerator Program, which provides guidance to New Yorkers hoping to reduce their carbon footprint.

At the crossroads of public health, environmentalism and social justice, the film is largely inspired by Bailey’s work.

“I’ve witnessed firsthand how the natural and built environment can negatively impact people’s lives,” she told The Village Sun.

In her previous job as an environmental consultant, Bailey witnessed the disparity between how landlords treat their tenants who pay higher and lower rents.

“At the drop of a dime…if someone thought that there was mold in their apartment, and they live in the penthouse apartment across the street from Central Park, we were there within the next 30 minutes to investigate,” she recalled.

At the same time, she said, “we’d have emergencies…because the building property manager got a violation from the city,” for neglecting an apartment, “to the point where the person is so angry — I’ve had cases where the person has a child in their apartment, and they believed the apartment was filled with lead paint.”

That’s why, in the film, the same protagonist receives disparate responses from a landlord, who either quickly moves to fix a leaky ceiling or gives the excuse that he lacks the money to perform repairs.

“As artists, we tend to abstract things, taking data and abstracting it a lot,” Todd said. “I really wanted to simplify the movement so that it was tangible for everyone, essentially, to understand the messaging in really simple, clean frames.”

The film’s message, according to the two collaborators, is that the effect of the built environment “trickles down differently” for people with varying access to resources.

“City agencies, national agencies need to do something” to address the inequities caused by energy inefficiency and environmental disparities, Bailey said.

“But also the people that are experiencing those energy-inefficiency issues, giving them knowledge, empowering them, I think can create really good solutions.”

Register for free to attend the Creative Climate Awards film screening in DUMBO, or register online to watch the films through Oct. 24. Don’t forget to vote for your favorite film in the festival.